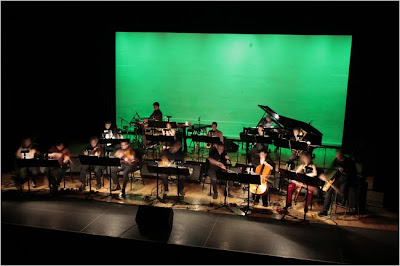 These intrepid musicians worked their fingers and arms nearly off their bones and joints last Friday during Columbia University’s Composer Portraits series held at the campus’s Miller Theatre.
The Fireworks Ensemble, led by conductor and musical director Ulrich Krieger, bravely undertook Lou Reed’s Metal Machine Music, at best an experimental piece from 1975 that the glam-rock god recorded early one morning in his Garment District loft, toying with feedback from two electric guitars and the various intrinsic and random new sounds created when wall of sound met wall of sound. Re-released in 2000, the album, a forerunner to industrial punk, is now a complete cult classic. The four 16-minute sides of the original album were transcribed into an “orchestral” piece by Krieger and performed in Berlin two years later without the fourth part and with Reed participating on the third. 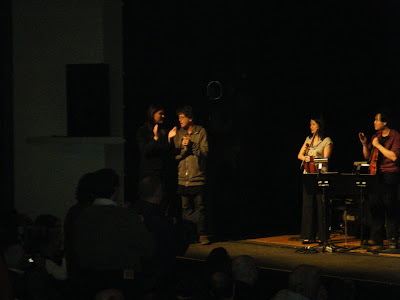 Reed (above) was on hand last Friday and joined the ensemble musicians after the brutal performance. No rest for the weary, except for one viola player who dropped his bow, busted most of the bow hairs and finally placed his instrument between his legs in order to complete the piece.
Having never heard the Metal Machine Music played, I expected it to be more hardcore. There were, after all, earplugs handed out along with the program notes. But listening to the cacophonous classic sounds, I was lulled into a peaceful serenity. The music reminded me a bit of Kronos Quartet, and in my mind, I could see machines at work, puffing away with metallic arms shuttling as fast as the bows of the symphony before me. 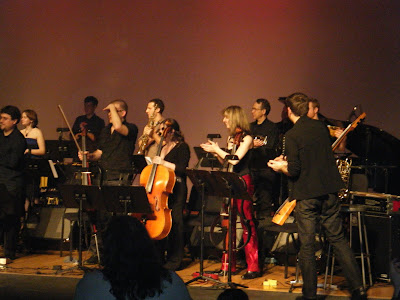 My eyes kept coming back to cellist Leigh Stuart sporting shiny red, spray-on looking red, patent leather pants, a complete fashion statement, her legs passionately gesturing, splayed protectively around her futuristic electric cello. A pleasure to watch as she sawed or banged her bow, she stood out in the sea of orchestral manoeuvres in dark, in both her choice of fashion and performing style.
Brava, Ms. Stuart!
(P.S.: I originally published this post incorrectly naming the fabulously-dressed musician as guest cellist Jane O’Hara. Mea culpa! A timely catch, see posted comment below, informed me that the  fashion figure is instead Fireworks Ensemble cellist Leigh Stuart, corrected copy above, and my sincerest apologies and deepest thanks to Brian Coughlin, Fireworks Ensemble Director!)