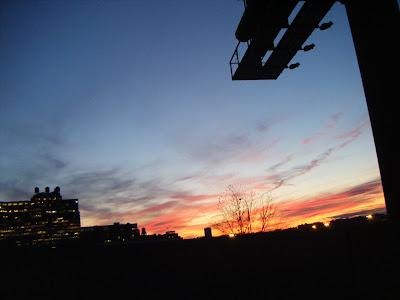 Not the sunset of our lives…but a cool sunset, nonetheless.

One of my friends, B, and I always come up with cool new phrases, ideas and products. Just the other day, we came up with “Faux-ny,” the cell phone handset that would look like a cordless land line hand set and give you hands-free cell phone access for when you’re doing stuff around the house, like dishes, and just can’t keep the cell phone balanced between your chin and shoulder. I know. Old habits die hard. But then she found out Saturday while listening to “Wait! Wait! Don’t Tell Me!” that the “Cell Mate” already exists. What? Do you use that when you’re in prison?! I like our product development idea sooo much better.

Anyway, she writes down practically each and every thought we compose together in a book that we swear we’re going to publish one day. B’s current new phrase is “use it AND lose it.” Possibly because she recently had hip replacement AND she’s a nationally-recognized gold-medal swimmer and all-around active athlete. We’re pairing up her phrase with a new term of mine I’m coining: the cripster.  Or crypster. Depending….

You could say we’re on the teeny, tiny precipice of those transcending, or as I like to think of it ~ rounding out ~ the term hipster. Those maybe a little gray at the edges, perhaps not the über-hip Kate Moss-streaked gray, but still cool…. Those experiencing the aches and pains that indicate we’ve lived a nice, full life so far. And, yes, I’m closing in now on two friends my age who’ve had a hip or two replaced. Of course, I myself have had two-handed carpal tunnel surgery. Hm, hmmm. It’s throat-clearing stuff, I tell ya.

But hey! I say we’re in good company. Look at Like John Lydon! Touring again with PiL after 17 years. And he ROCKED last week, both at Terminal 5 on Tuesday and at the Music Hall Wednesday in Williamsburg (yes, the hipster’s current homeland), as he wrapped up a 15+ city schedule.

Not to be confused with me and my other friend, seen here, below, who’s One-derful birthday is this Summer Solstice… Happy Early Birthday, Arleen! Just a little aside…. 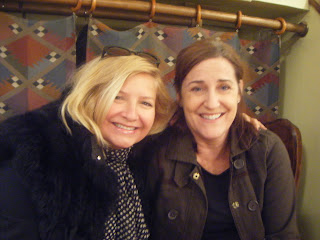 I just think we’re getting better and better. Not just older and older. And I thank Kate Moss for making gray cool. As B points out, I’ve wanted to go gray for years, although, back then, my hairdresser admonished me that we don’t do gray.