Heading out to Rockaways today to help clean, hopefully take pre-packed, self-heating meals (Army style) and try to do my part to help. 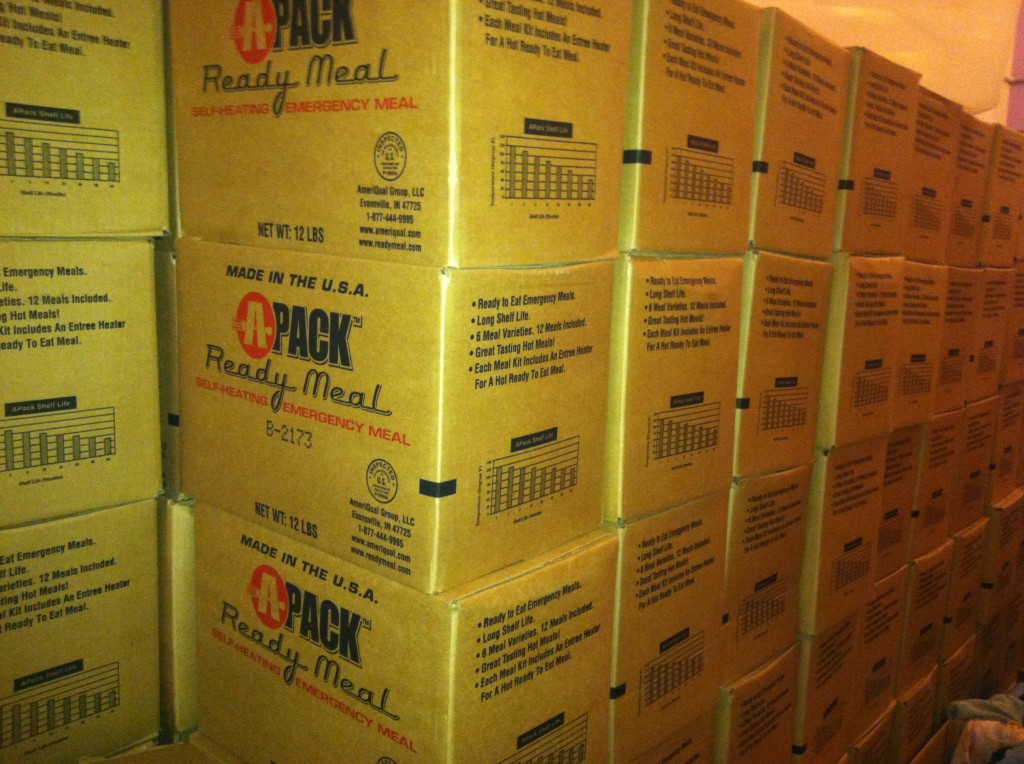 Have been putting in hours at the Sixth Street Community Center, helping make PBJ sandwiches, man the donation areas, unload trucks, van and cars as they come in with donations. It simultaneously has been a heartwarming and heart wrenching experience. Yesterday, a couple came in with their one-month old baby, needing all kinds of supplies a baby that young needs, as well as warmth for themselves. Others came in needing a sweater, a jacket, blankets. One gentleman took a book by Marcus Aurelius, saying he needed to feed his body, spirit AND mind. Some said no to offers of additional items of clothing, saying they didn’t need it and better to leave it for someone who did. I won’t say there weren’t others stuffing rolling cart after rolling cart with clothes, but, hey, no judgement. Perhaps they’d lost their closets in the flood and needed everything they could get their hands on. 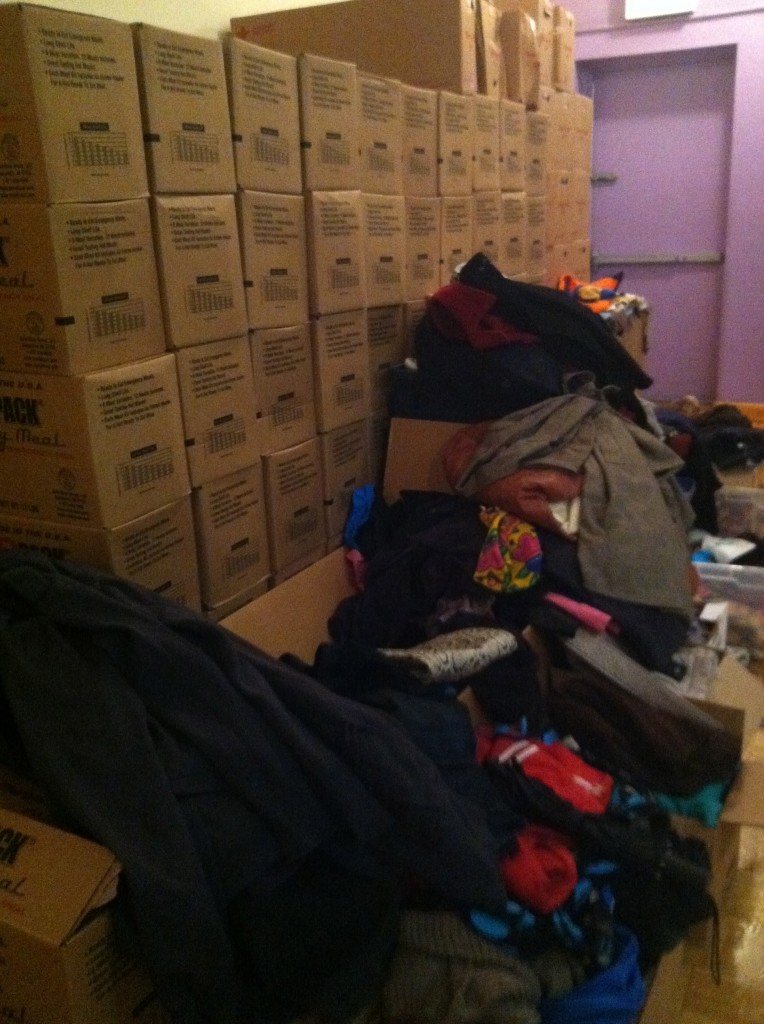 People have been so kind and generous, donating brand new blankets, clothes with tags on them, non-perishable food, batteries, sandwiches and baby goods. A woman came in Wednesday during the snow storm carrying several bags of new soft faux fur throws from Century 21; a little girl carried one out that night, clutching it to her, fearful to give it up even to put it in a plastic bag to protect it from getting wet as she walked home with her mother in the thick of the wet whiteness. A couple, landlords from midtown, came with 10 brand newly-bought sweaters, among other items. The Turkish Cultural Center came Wednesday  with box upon box of brand new men’s dress socks, warm and toasty enough for males and females. A couple of angels from Calvin Klein dropped off a huge amount of gift-with-purchase bags from their perfume division, greatly appreciated for the runners taking food to elderly on high floors, shut-ins who hadn’t eaten in three or more days and people just generally afraid to leave their homes in the NYCHA buildings, which have had no power or heat.

The 9th Street Police Precinct dropped off in the height of the snow, late Wednesday, with tons of Pampers and the like, as well as water and other necessities. 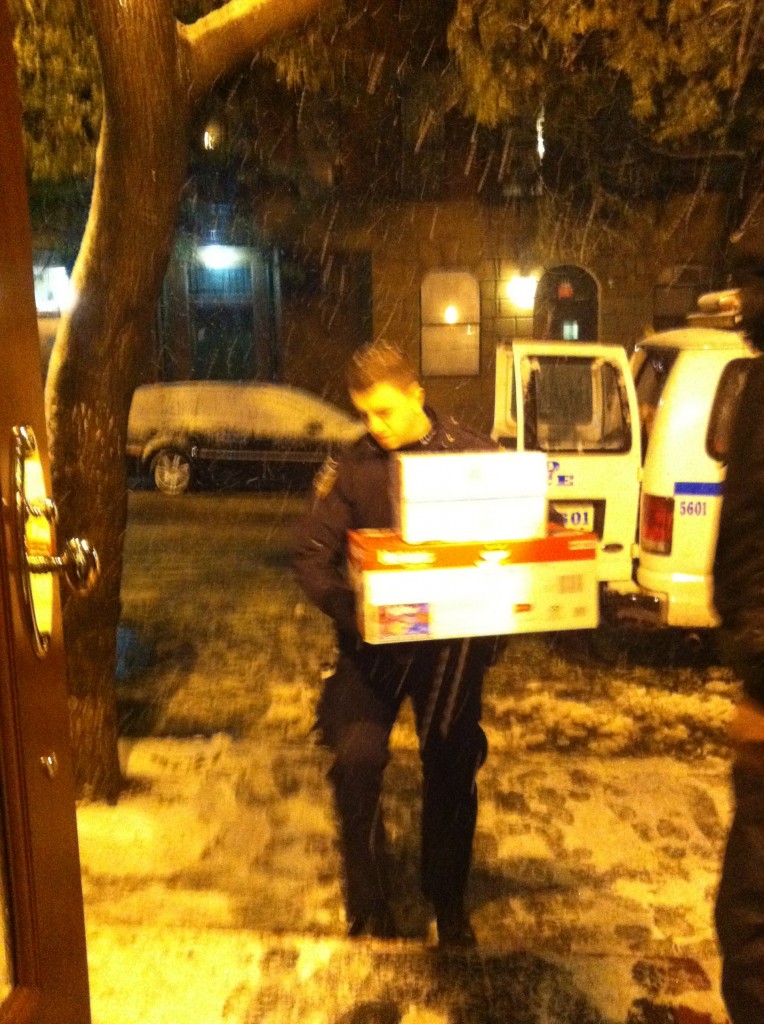 Several people have set up Amazon registries, so people donating to the Rockaways know  exactly what and how many of each item is needed, like this one called Occupy Sandy and Occupy Sandy’s Wedding Registry.
Here’s what I posted earlier this week about the East Village, many of whose residents are still without power or heat:
Please know that as terrible as things are out in the Rockaways and Staten Island (and they are BEYOND TERRIBLE – met a woman today who’d been out there over the weekend volunteering until she ran out of gas and couldn’t get back so she came to Sixth Street from the Bronx; they need tons of help out there and Staten Island, too), there is SO much to be done here at home in the EAST VILLAGE, not even a block from our apartment building.
People who got flooded in the EV up and down Avenue C are still without power, heat, food. Some live in NYCHA buildings on high floors, unable to make it down the 20+ flights of stairs in the dark without the elevator — I met an EV neighbor yesterday who’d been taking FEMA meals to shut-ins who told me he met a 90 year old woman yesterday who hadn’t eaten in three days and another woman on a respirator that had been hooked up to a car battery to ensure she could breathe.The angel of our neighborhood, The Sixth Street Community Center, working in tandem with GOLES (Good Old Lower East Side), will be open tomorrow afternoon to 6. They will need more bread tomorrow for PBJ sammies for sure, among other donations. People are lining up and coming in cold, looking for blankets (they got a donation from the Red Cross late today), warm winter coats, sweaters, hats. Angels from Calvin Klein brought in gift-with-purchase bags to help people carry away sustenance, warmth, water.

Hugo Nicole and Kristen Strombelline, after their bag drop off at Sixth Street Community Center

Oh, and P.S., I was lucky enough to have so many people thank me that I nearly burst into tears a number of times. What were they thanking ME for?! I was doing nothing! Now, if I could turn on their power and heat, that would be another story….