We were blessed last night to be able to take in the Blakeian Patti Smith, who counts the poet William Blake as a major source of inspiration, as she read, spoke, sang, strummed and generally reminisced about libraries, school, New York City of old, waitressing and, of course, her friendship with photographer Robert Mapplethorpe during her Live from the NYPL performance feting her new book of prose, “Just Kids.”

Setting the tone for the evening, Smith read her first chapter from backstage, intercut with an aria from the Puccini opera “Tosca,” describing the last day of Mapplethorpe’s life. She then stepped out onto the stage and, sometimes prompted by NYPL event director Paul Holdengraber, recounted the tale of how the two met while she was working at Brentanno’s on Fifth Avenue, interspersing accounts of moving to a New York City that has now “changed, and some of it not for the better,” her mother packing a waitress outfit with its requisite white wedge shoes into Patti’s tiny suitcase, a loatheful suit of armor she immediately left in a Port Authority woman’s bathroom; a starving and penniless Patti living in the bathroom of the bookstore, unbeknownst to her co-workers, and accepting dinner out with an “award-winning Sci-Fi author,” who she was sure wanted “something” in return for the money spent, a fear based on perhaps too much Peyton Place, she joked.

She spoke of her love of books, the poets Rimbaud and Jean Genet, and  quoted freely and easily throughout the night, especially from “The Alchemist” and the author Paolo Coehlo’s take on radiance. Holdengraber asked her to sing and she did so, sweetly, powerfully, poetically, her last song an ode to William Blake. 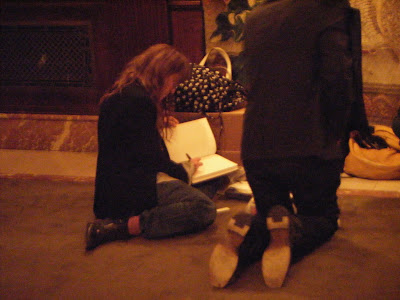 The ever-approachable Smith, wearing skinny jeans tucked into pink socks, lace up, distressed men’s style high-top brogues, an untucked white shirt striped on sleeves and bottom panel and an oversized dark tailored sport coat, flopped to the floor to sign a copy of her book for Holdengraber. In his desire to “make the lions roar,” Holdengraber has engaged many an iconic cultural figure in his “In Conversation With…” series, and when he tempted the New Jersey-native to name the stone cats guarding the library, her response was Patience and Prudence. She was close; they’re Patience and Fortitude, with Fortitude closer to 42nd Street, according to Holdengraber….”and Patience is closer to Patti,” offered the poet. 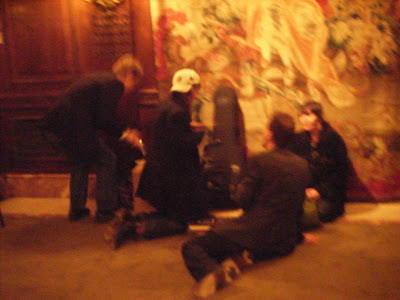 I didn’t want to run up into her face to take photos at the private reception we were invited to…so I got some pretty soft focus shots, but you can still see how frickin’ adorable she is, so approachable, sitting on the floor, with her cap on sideways-backwards. 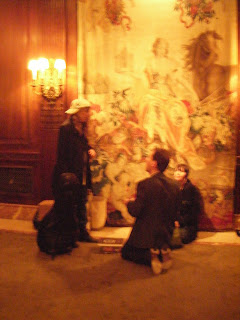