The things I learn about art from Eric Esmailzadeh Parnes….I had no idea about the manifestation of the I Dream of Jeannie vase!

Per Eric’s website: “It is of especial interest to note that Jeannie’s famous bottle was not specifically manufactured for the show. The actual bottle was a 1964 Jim Beam Bourbon Whiskey liquor decanter, produced as a specialty release for Christmas that year. It was created by a commercial designer by the name of Roy Kramer for the Wheaton Bottle Company, clearly influenced by a Middle Eastern design. Reportedly, Jim Beam Distillery’s President at the time, Martin Lewin, had travelled through Europe to inspect the company’s branches situated overseas; and during a trip to Germany in 1963, he noted a Middle Eastern decanter that would eventually become the holiday edition of the whiskey and later the vessel for Jeannie.”

Also from Eric’s “I Dream of Jeannie: I See Demons” collection: “Of Visions of Jinn II”
Acrylic on Canvas
140cm x 132cm

Not only is Eric an art world eye opener, he’s great fun, a terrific neighbor quick with artful conversation and a unique sense of style that never ceases to amaze me. FashionWhirled has featured him before, focusing both on his art and his fashion (remember his cool “mandels?”). 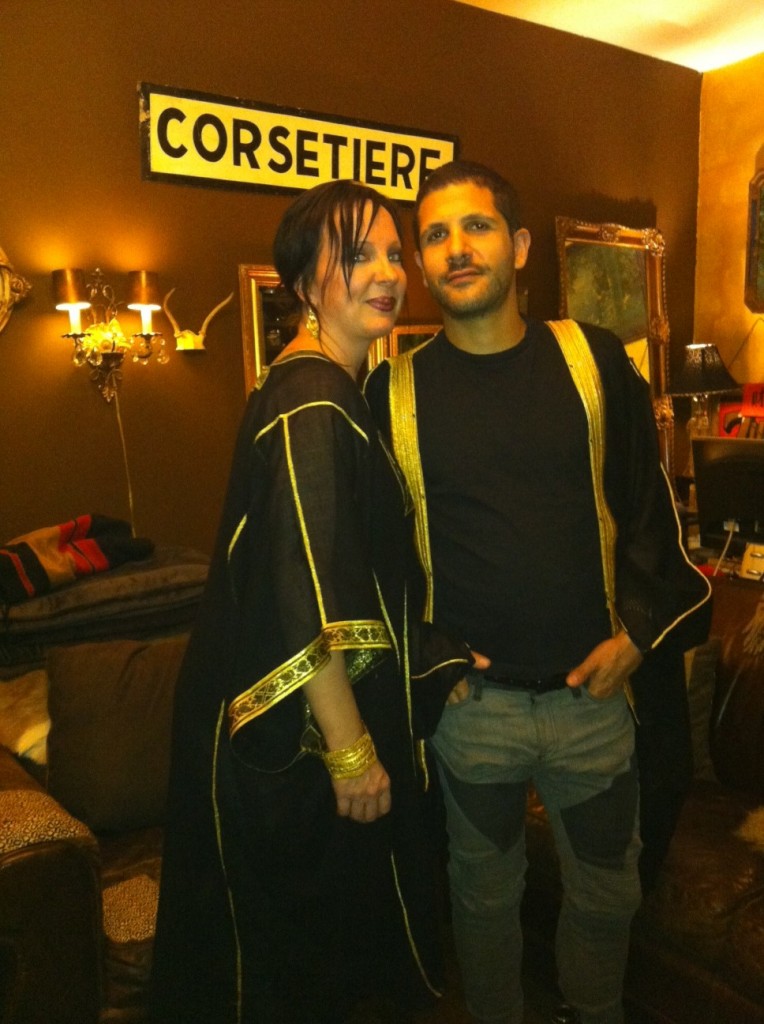 Rebecca and Eric, such a lovely couple, in gorgeous fashions from Qatar, where Eric just returned from exhibiting his latest work

Plus, he and the lovely artiste and chef Rebecca Weber, whom we’ve also written about in a past post, brought us some amazing myrrh and a mangosteen the other evening when we were lucky enough to spend some time over wine with them. Thank you, Eric and Rebecca!

the magical mangosteen with myrrh