Our footsteps diverge somewhat from those of Hiram Bingham, who in 1911 “discovered” the lost city of the Incas. Bingham was a professor from Yale who found the ruins at Machu Picchu supposedly from information from a farmer’s son.

The welcome on Monday as we check in for our Orient Express train trek through the Sacred Valley from Cusco to the village of Aguas Calientes; mimosas, an indigenous dance troupe and a first rate wait staff. In fact, our trip is first class all the way, baby! Brunch on board. A bar car with a balcony featuring open windows for a view out the back. Peruvian dueling guitar players, who improvised beats on a metal storage bin. The party has started! Of course, I’m in seat #13. My lucky number arises time after time on this trip, in some form or another! 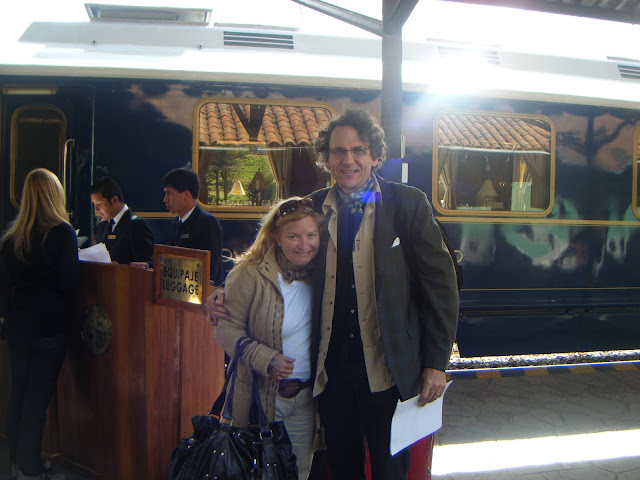 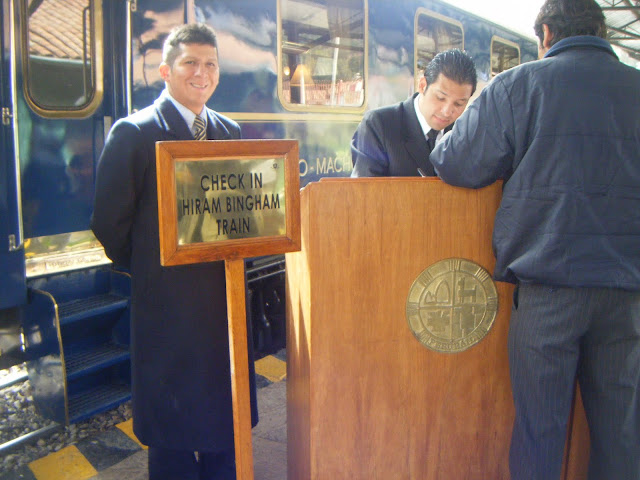 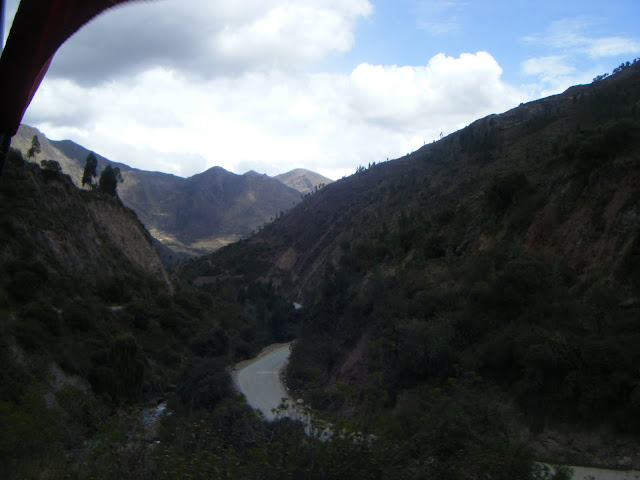 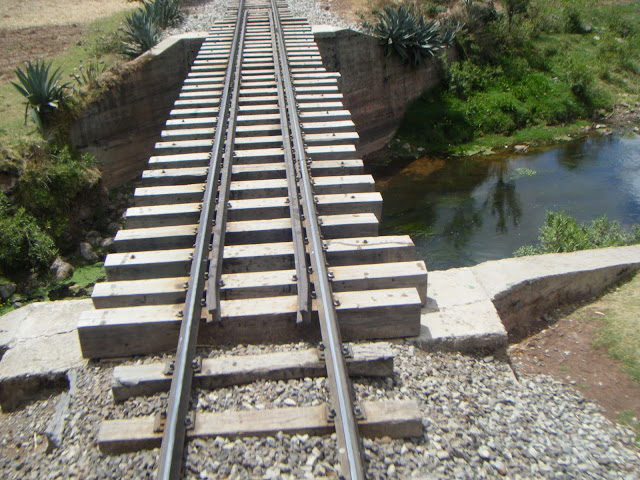 When we arrive in Aguas Calientes after the nearly 4 hour train ride, it’s time to board the bus of 13 switchbacks ~ the manner in which we make it to the Sanctuary Lodge at the entrance of the ruins of Machu Picchu. For some reason, I’m more exhilarated than afraid. And I’m even perched on the window seat, taking pictures down the side of the mountain. I still count each switchback, though, under my breath to Philippo. 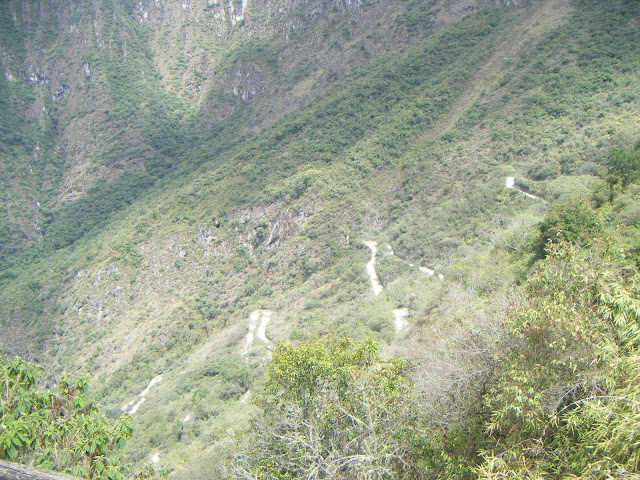 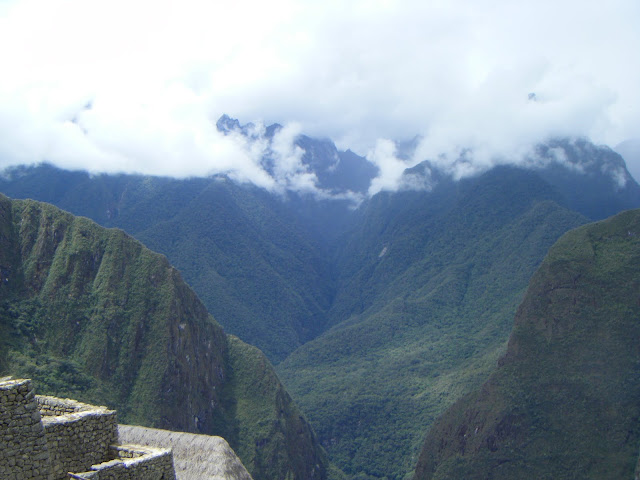 We trek around the ruins the rest of that afternoon. Our guide, Garry, is super informative and passionate about his history, beliefs and position on the place. He tells us that many Peruvians dispute the findings of Bingham, who took bodies out of Machu Picchu graves (he had the site excavated) and his sources told him the remains were all women, leading to the assumption that Machu Picchu was a temple for virgin sacrifices. It later was revealed that half the remains found were men as well as women. I’m going to have to read the book that Bingham wrote after his last time in Machu Picchu, “Lost City of the Incas” and delve into this more. Garry also disputes the spirituality of the space, but at times it seems almost palpable in spots. Although we are not allowed into the Temple of the Sun, one can imagine the services, the animal (human?) sacrifices, the prayers to the gods of nature. 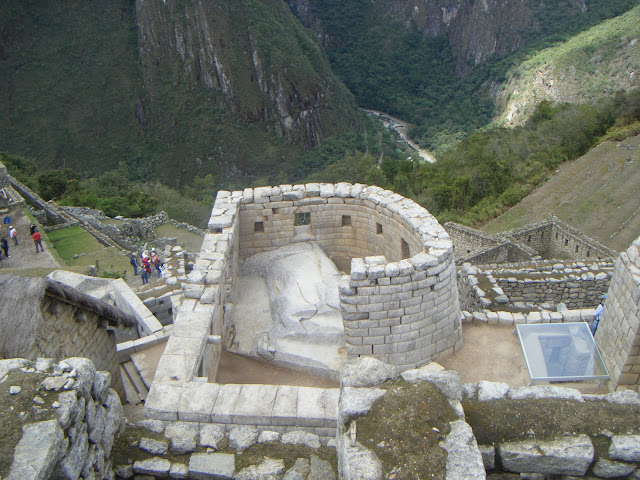 Garry, showing us the Temple of the Condor. Peruvians believe in a 3-tiered existence, symbolized by the Condor, the Snake and the Puma, representing the gods of the sky, the underworld and the energy of the mother earth. 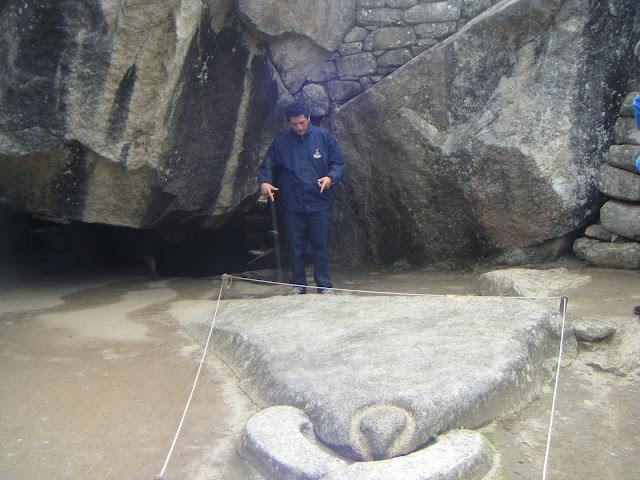 Our first actual, true rainbow over the peaks. We’d seen a rainbow flag flying over an adobe farmhouse and thought how wonderful it was the Peru was so gay friendly. Turns out, the rainbow is the symbol of Peru! 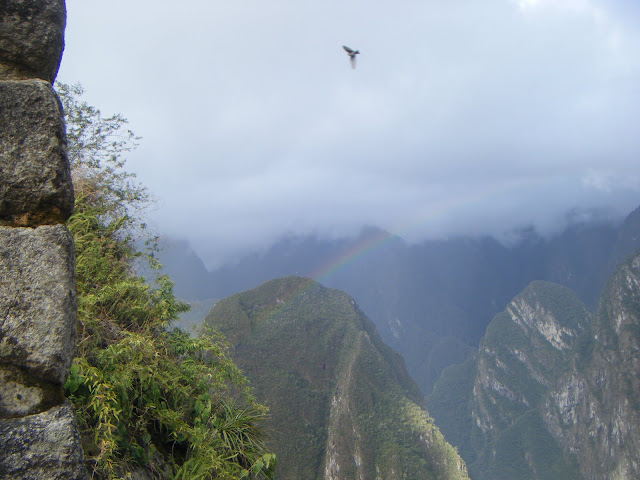 I like to think that’s a condor flying high above our mystical, colorful welcome to the top of the world!