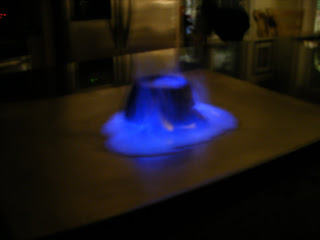 It wasn’t the first time I’d brought the flamin’ pagan figgy puddin’ home for the holidays. I just don’t remember anyone having a real problem with it in the past.

Oh sure. There had been the usual grumbling about it being “pagan” ~ “What, are you against Christmas now? Should we be calling it a ‘holiday tree’ and ‘seasonal vacation days?'” My family wanted to know if I was into another weird New York City trend, this time a vaguely sinister, spiritual one. My mother mostly worried that I would set my sister’s kitchen on fire during the requisite flamin’ part of the pudding. But all fears were laid to rest.

And for the most part, everybody seemed to like the fun new family tradition. The yummy switch from inedible fruit cake to figgy puddin’ lovingly stirred by East Village “elves.” The foreign coins hidden in the cake for luck, a fortune wrapped around each. Even the blazing, heated bourbon poured from a small sauce pan over the pudding until the little cake was all lit up, like one big birthday candle for Jesus.

I liked the fact that I was, in my own way, supporting my friend Sacha and her organic, local goodies, the pudding but one small part of her Stiggly Holistics product line. I liked that I was continuing her family’s tradition, handed down from her now-90 year old Granny. Excited about the prospect of being able to bring another puddin’ ripe for flamin’ luck-giving, I reserved one weeks prior to our estimated southern excursion and purchased it from Sacha that snowy Saturday afternoon, parking in a deep white drift in front of her craft fair behind d.b.a. on First Avenue.

Somehow this year, the figgy pudding wasn’t as eagerly anticipated by my family. Yeah, they each commented on the cute little fabric-covered dessert sitting innocently on my sister’s counter top those few days before Christmas, exclaiming, “Oh, look! Wow! We can’t wait! Remember that other year when we danced around the kitchen….” Their enthusiasm trickled off. Christmas came and went and the little pudding still sat on Susan’s counter.
We planned a New Year’s Day party, with my brother’s family joining us for dinner and dessert.  I started steaming the pudding the called-for two hours. Everybody became impatient, mostly my brother, who was jet-lagged from a business trip to Taipei. They were tired, full from the huge holiday meal and wanted to go home. Maybe there were too many other desserts, also lovingly prepared. The pumpkin pies and deep, dark rich brownies baked by my husband, the green jello fruit salad ~ an annual masterpiece ~ concocted by my sister, the peanut butter cookies and angel food cake made by my mother, the tin after tin and plastic-wrapped holiday plated presents from Susan’s neighbors. No one seemed too interested in my flamin’ pagan puddin’ presentation.
My brother was the loudest dissenter. Maybe he’d had just a little too much holiday cheer on top of his exhaustion. Daunted, my feelings hurt, I cut my losses after about an hour and took the pudding housed in its reusable glass container out of the steaming water, placing it upside-down on a cookie sheet, following, as I chose to believe, Sacha’s own granny’s instructions word-for-word. My nephew, my brother’s son who is a 10-year-old violin virtuoso, began to help me pat it out of its glass home, me with my oven mitt on, he with his musically-gifted bare hand. Slowly, but surely, a sucking sound was audible as the pudding started to squoosh out.
And then the unthinkable happened. The glass container bottom, now on top, slowly fissured, the crack broadening until a tiny piece no bigger than two chocolate chips broke out from one side near the bottom on the pan, penetrating the pudding. My nephew and I looked at each other, in horror, in silence. I thought he might cry. It really wasn’t his fault; perhaps he’d been a little overzealous, smacking that glass with gusto, wanting that damn dessert out already. And maybe he too should’ve had on a soft oven mitt. But I didn’t want to make him feel bad; he was the only kid  at the party, the girls both had overnight guests and were roasting S’Mores on the fire pit outside. “It’s okay,” I whispered to him. “We’ve got so many other things to eat. Let’s just not tell anybody else.”  Too late.
“What’s wrong? What’s wrong?” Everyone chimed in, blaming the glass, reminding me that my inability to take full responsibility in regards to failure came from a long history of familial dysfunctionality. “It wasn’t cook proof! It wasn’t heat resistant!” I just was about to trash the pudding when I caught myself. We still could light it aflame, I thought out loud, slices to eat and good luck coins be damned.
There was great objection to my wanting to heat up the bourbon before lighting it afire. “No! No! Just pour it on, then light it!” That, from my brother, who’d been pouring it on already all night. Somehow we did get it to light, as you can see that from the picture above, but after my brother-in-law warmed the liquor before lighting it, the new general consensus was that, yes, warming it opened the spirit so that it could light and stay on fire.
We did several takes, lighting it, Philippo killing the room lights, Laurie and I snapping away, she taking pictures for the family scrapbook, I for this blog. The flame burned low and blue and finally sputtered out. My sister cut open the pudding so we could access a glass-free section. John B. and Elliott dug around in the demise, debunking the lucky coins legend. Then they hit hot gold, tiny Saran-and-fortune-wrapped pieces of luck that turned out to be bits of Mexican currency. We took turns sticking our fingers into the cooling confection, churning it with spoons to seek out edible bits, chewing carefully lest we bite into the lost bit of glass container.
That’s when Susan blurted out, “This tastes just like a Costco bran muffin!”
My face fell. “And STAYED that way for a full 15 seconds!” according to my brother, who took great delight in my crest-fallen look. He even claimed it made his whole holiday. 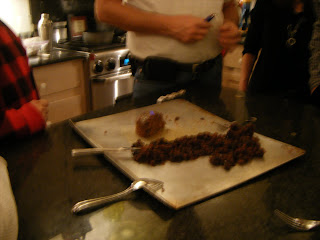 A bourbon-burning light bulb went off over my family’s collective head, a burn and destroy mission, their desecration of the flamin’ pagan puddin’, kicking in. Half a Costco bran muffin was procured from the pantry and thoroughly marinated with the good bourbon. Then, the rest of the lovingly-made-by-elves, mutilated-by-my-family pagan pudding was re-drenched. Philippo killed the room lights again and again as attempts to torch each were made, with varying degrees of success. We all stared at the flamin’ competitors. Laurie and I snapped photos. Elliott was giddy with fireworks of real fire.
Things went quickly downhill from there. Tequila replaced the bourbon. A new, whole muffin replaced the smoldering embers of the last Costco tester. The burning basically spent, Elliott now was trying to roast S’Mores over the anemic flames that refused to spark. He switched to a burner on the gas stove. Excitement moved from the flaming desserts to the burn pit outside. 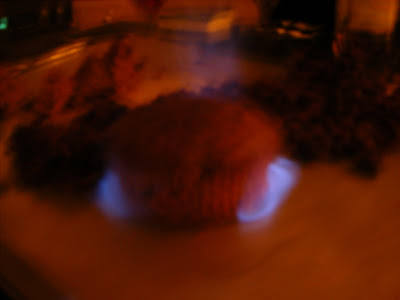 For the record, the Costco bran muffin did NOT burn or taste like its organic couture cousin of dessert. But a new holiday family tradition was born that day. It will be interesting to see what we can torch in 2011. I think next year, I won’t waste the money on one of Sacha’s Granny Jones Organic Flamin’ Pagan Puddings. At least, not for my family. 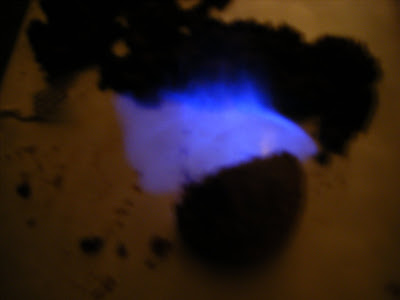 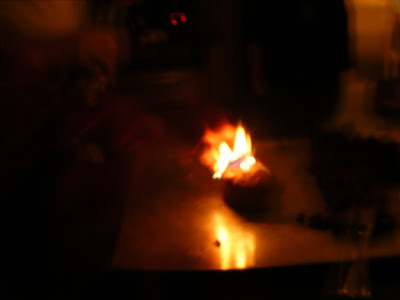 2 thoughts on “Burn + Destroy: A Christmas Story. Or, How My Family Came to Desecrate Granny Jones’ Flamin’ Pagan Figgy Pudding with a Costco Bran Muffin”