I have just two words for the Spring/Summer 2015 collections of Trina Turk and Mr Turk: 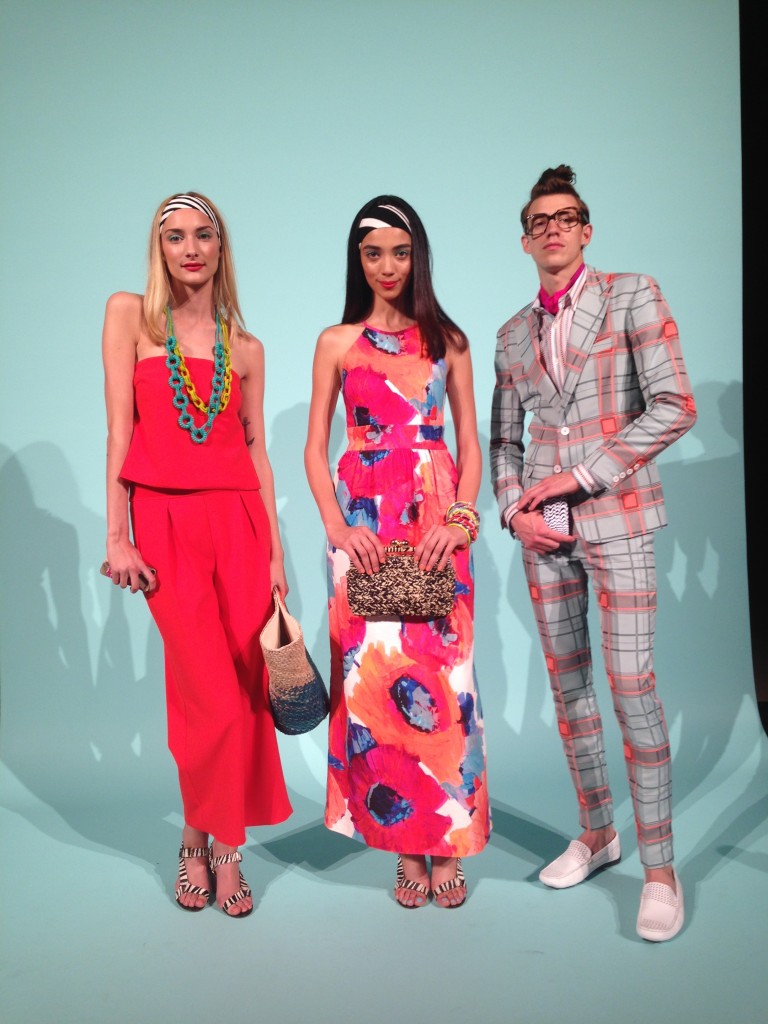 Oh, yeah, and let’s add in selfies for everyone, as the models were told to keep their Smart Phones (branded brilliantly, of course, with Trina Turk phone covers) and document the presentation for Instagram. Double whammy of a PR Wham, Bam, Thank You, M’am! And, yep, that’s Trink Turk, below, capturing the moment after the walk-through with her designer hubby Jonathan Skow, surrounded by their fun-loving gang of girls and guys. 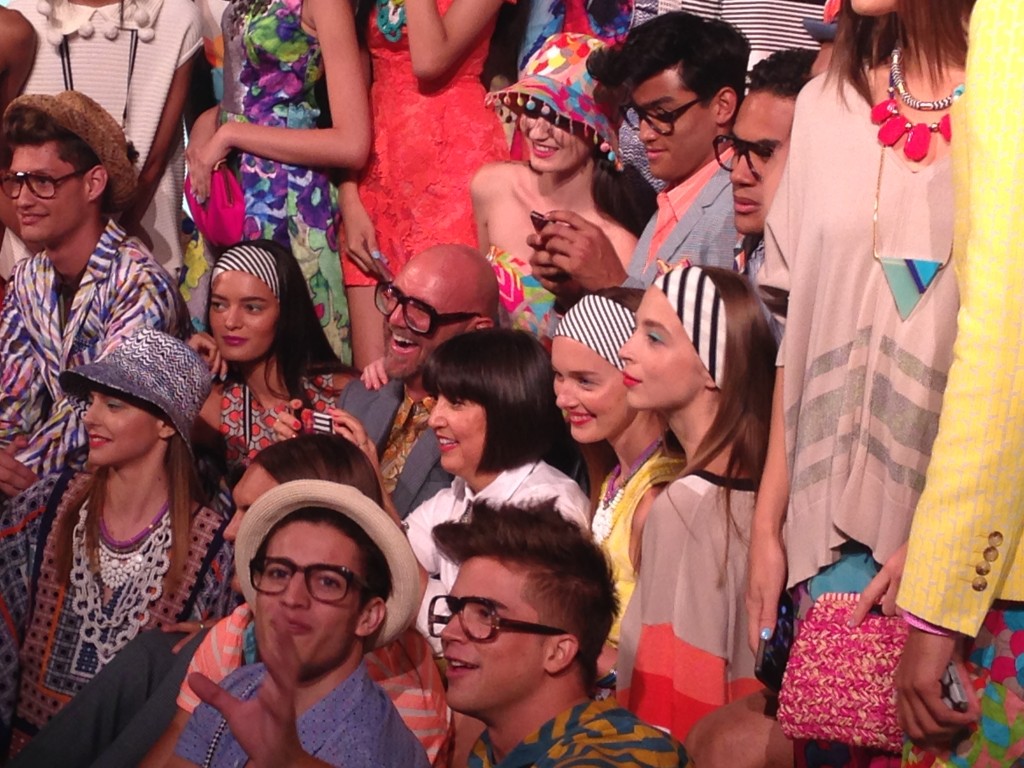 The duo put forth a kaleidoscopic range (we are so loving that term for this season — cuz it fits) of hue and pattern influenced by a trip to the L.A. Flower Market. Based on the hothouse hues they presented, it looked as though they bought out the entire market that day! Each tableaux vignette focused on some aspect of a fun day in the sun, with female models blooming in Trina Turk’s trippy patterned maxi dresses, sweet short sets or poufy sundresses and guy models in Mr Turk’s tropical shorts, pop art swim trunks, super slim trousers and boldly printed tailored suits perfect for those schmoozing L.A. poolside parties. So, naturally, there was swimwear. Because what L.A. day isn’t complete without a quick jaunt to the beaches of Santa Monica or Venice?! 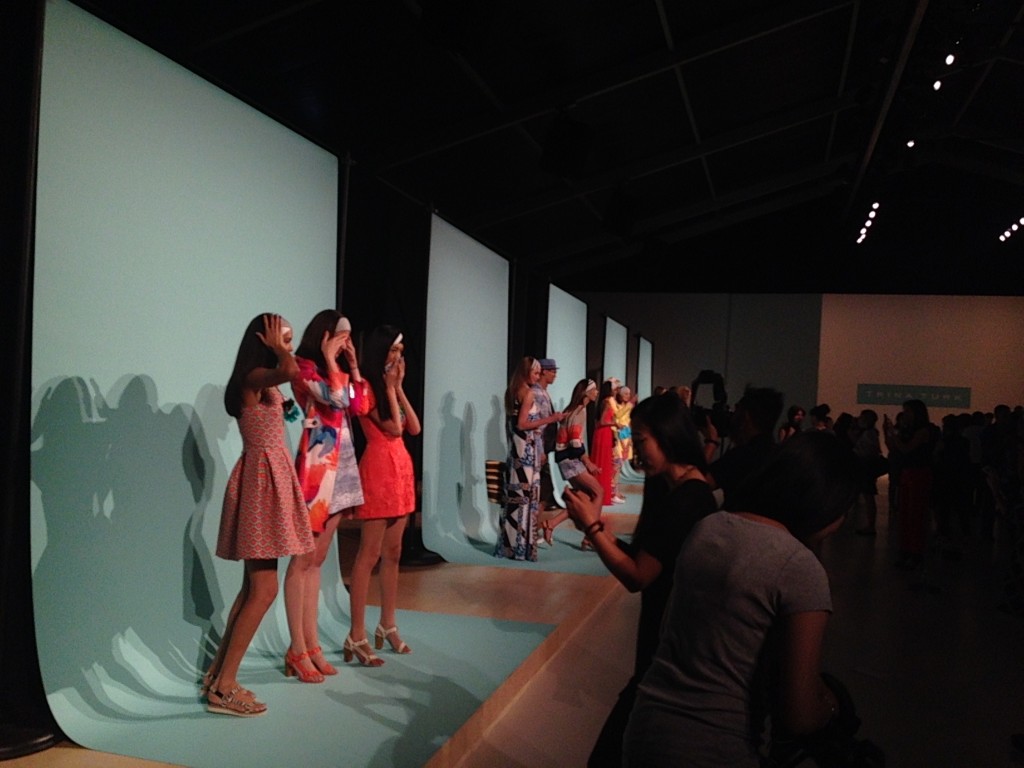 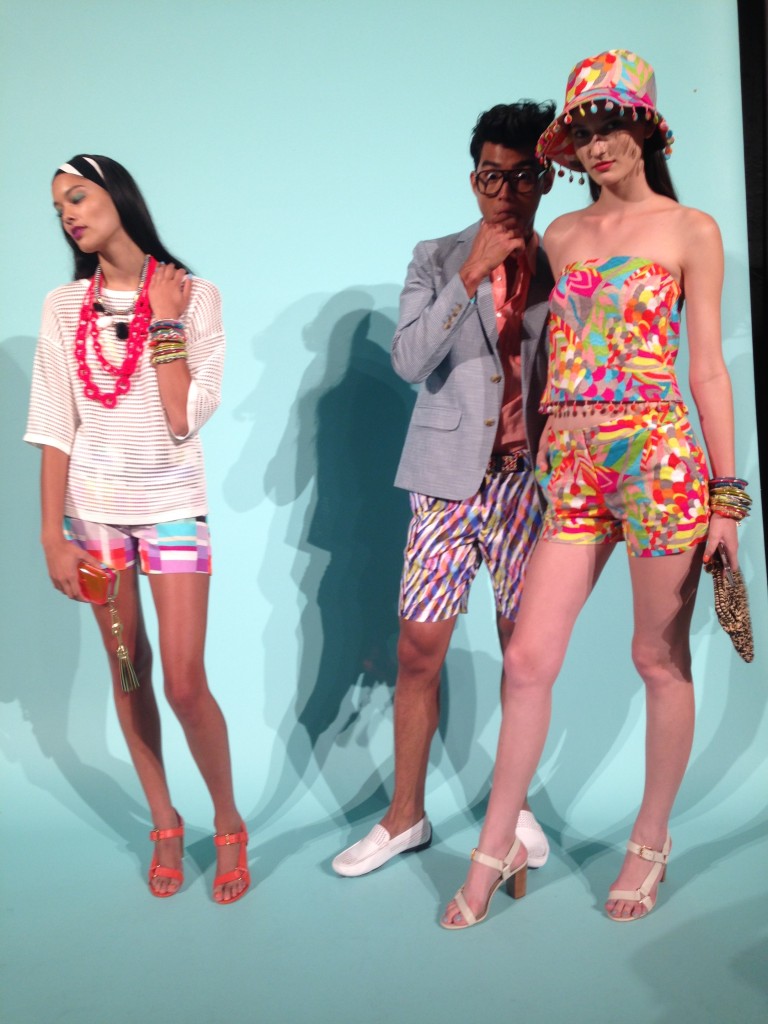 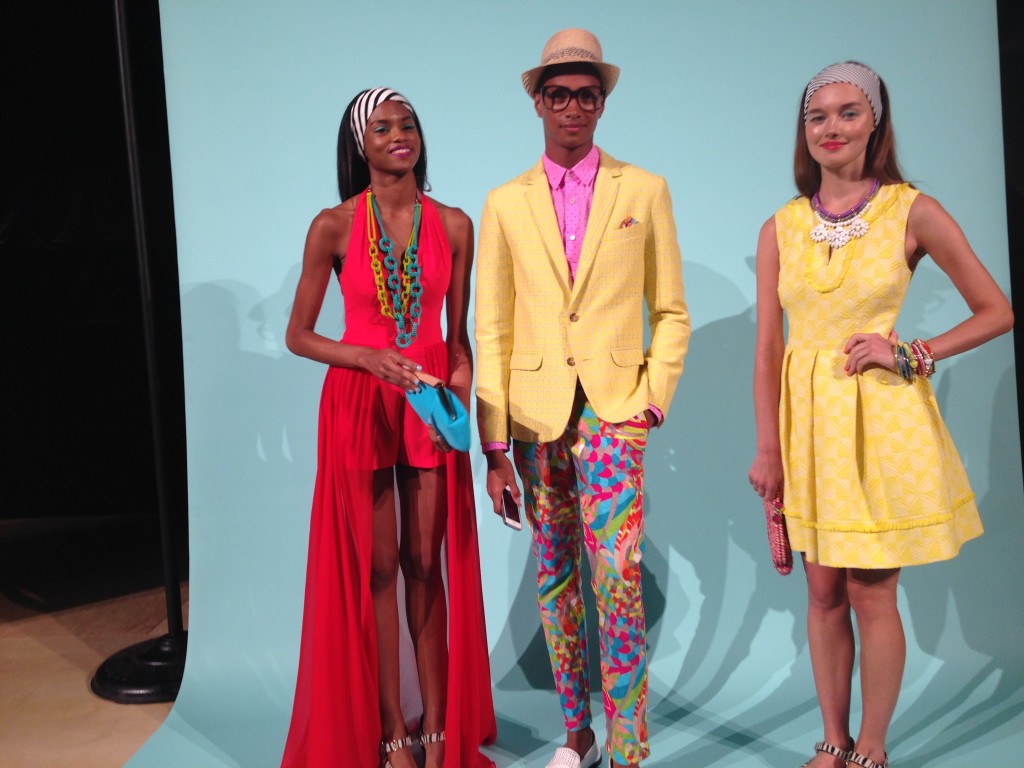 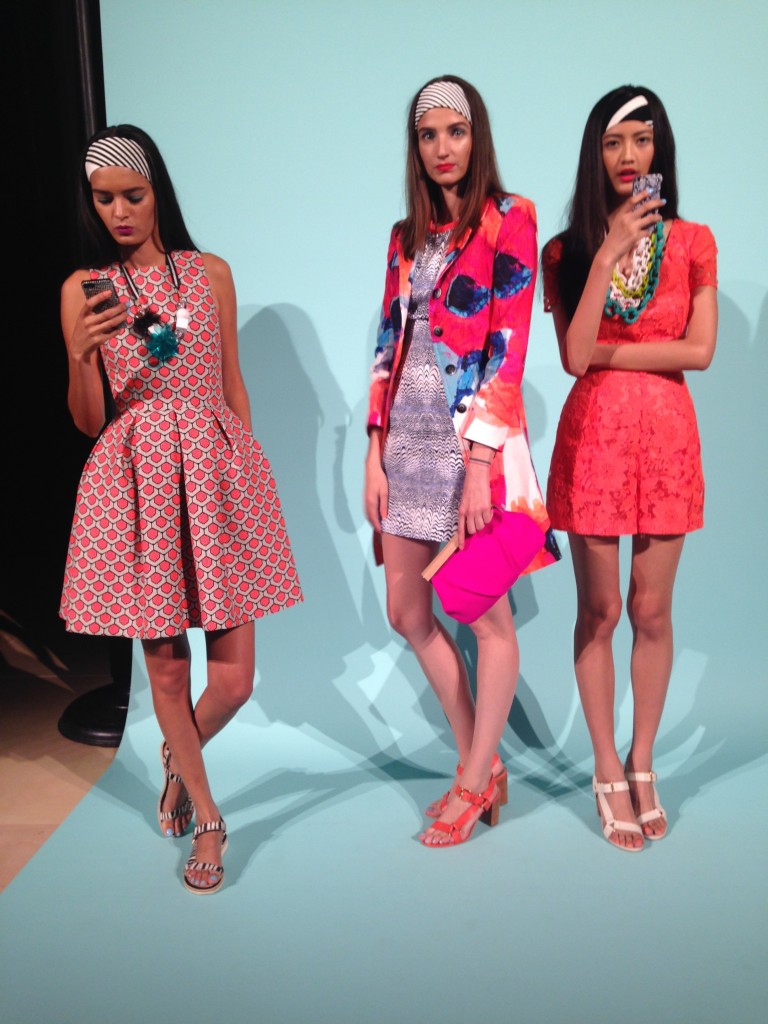 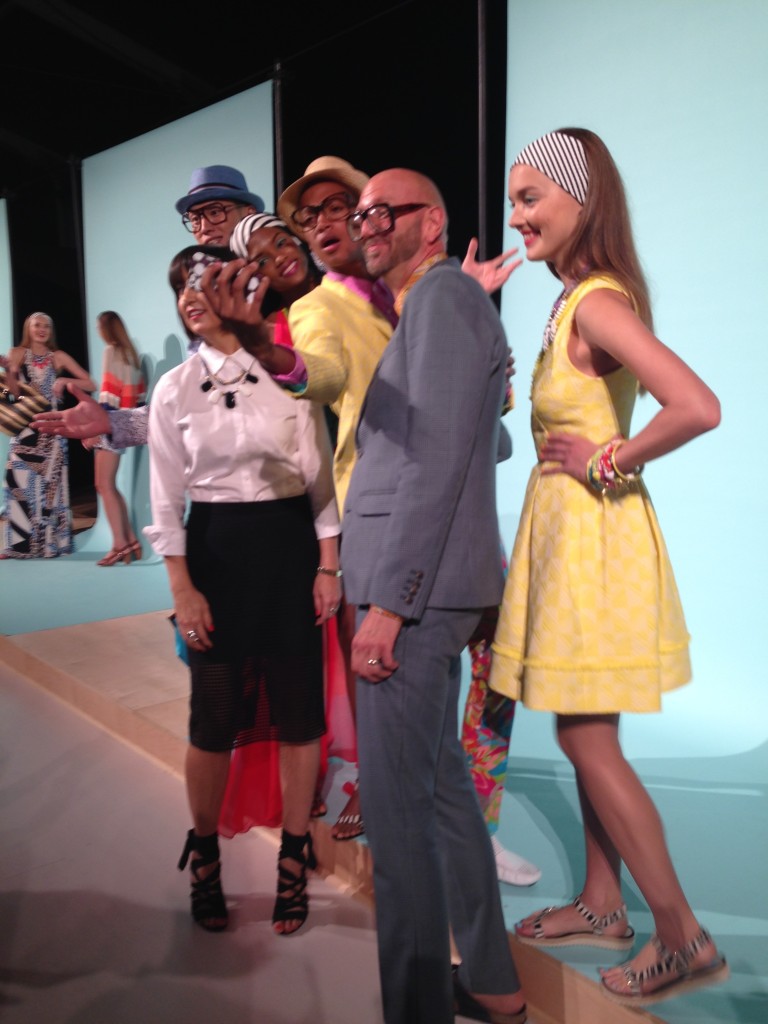 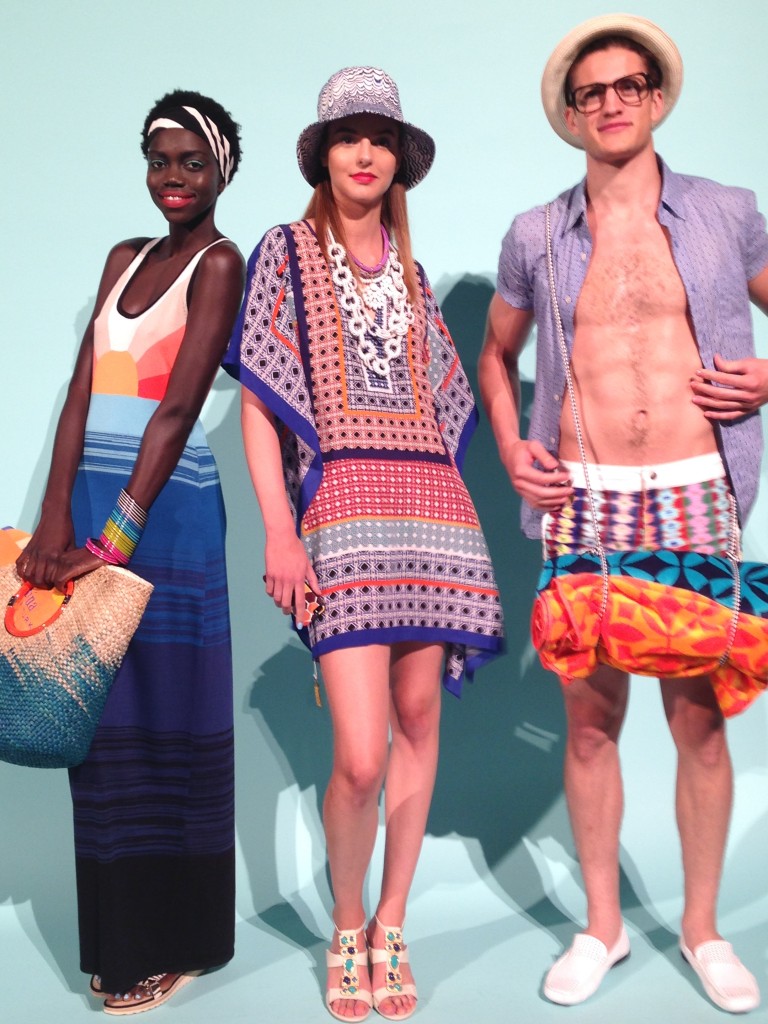 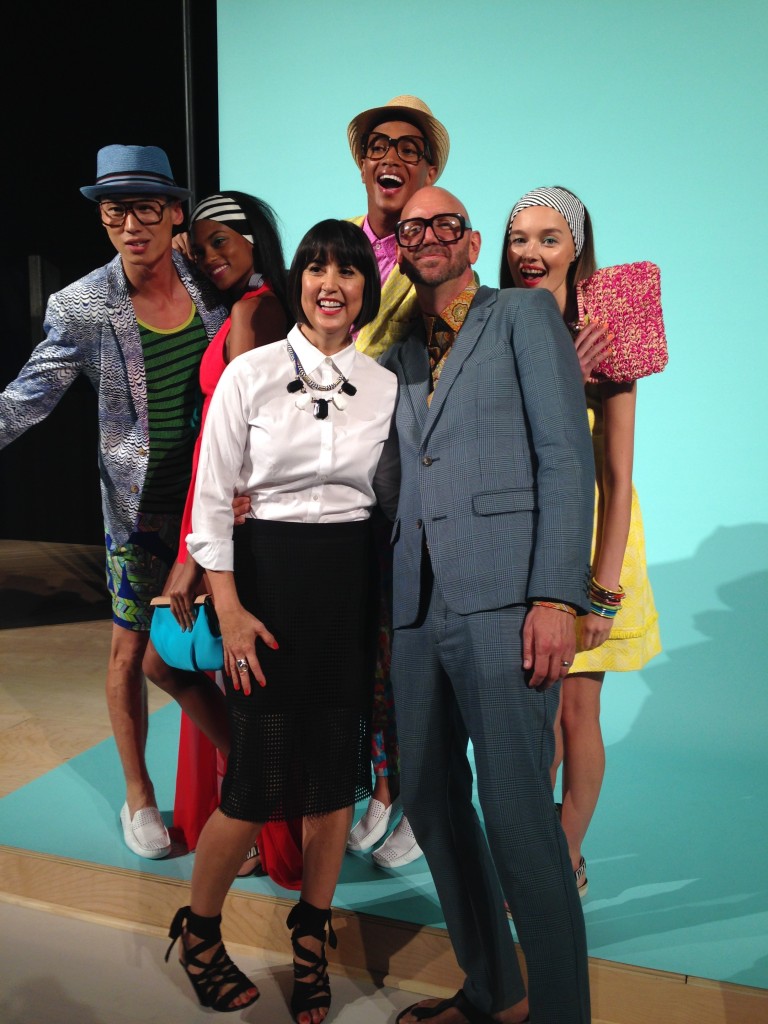 Handbags may have been the newest addition manifested from Trina Turk’s imagination, but the freshness came directly from the clothes themselves. 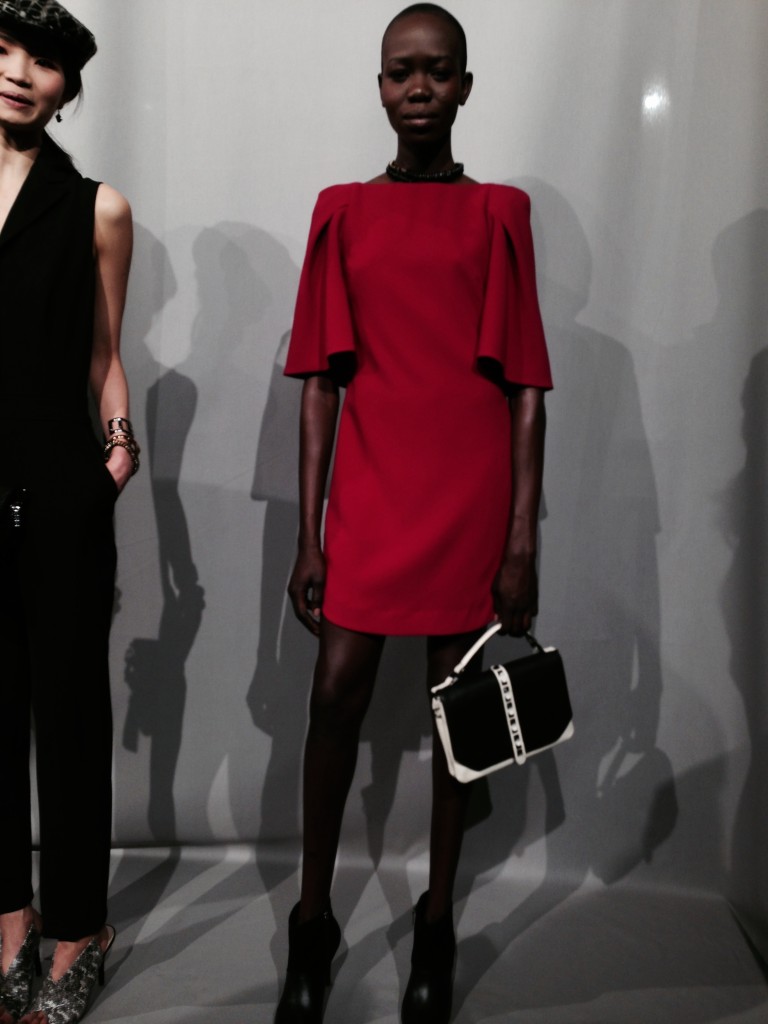 Her eponymous women’s collection, shown in tandem with Mr Turk menswear for AW14 at The Hudson Hotel’s The Hub venue last week, was modern yet nostalgic at the same time. Trina cited California cool as the inspiration, as though the Turks had spun along “Sunset Boulevard through LA from Silverlake to the sea.” Fresh mixes of patterns, colors, textures and cuts made their Palm Springs-focused mark. Think bold florals, vibrant reds and turqs, tweeds and plaids. Swingy shorter jacket silhouettes. Sexy and slim pants and skirts. And those handbags! Just the right amount of edge to stave off any lady-like prissiness.

Mr Turk, designed by photographer/stylist/Trina husband Jonathan Skow, had a retro gentleman’s-punk attitude going on, echoing the womenswear with a slim fit, quirky pattern combos and color mixes. Jonathan has said the menswear is exactly his style. And he wears it well.

These two collections looked so cool, so modern, they could’ve been seen out on Lincoln Center’s Plaza, being stalked by the street style blog photogs instead of being showcased in the basement of the The Hub. These are clothes that are as perfect for jumping around from fashion show to show as they are for the upcoming Oscars Red Carpet wear – how ’bout those his-and-hers black and green jacquard tuxes? Gotta be fresh. 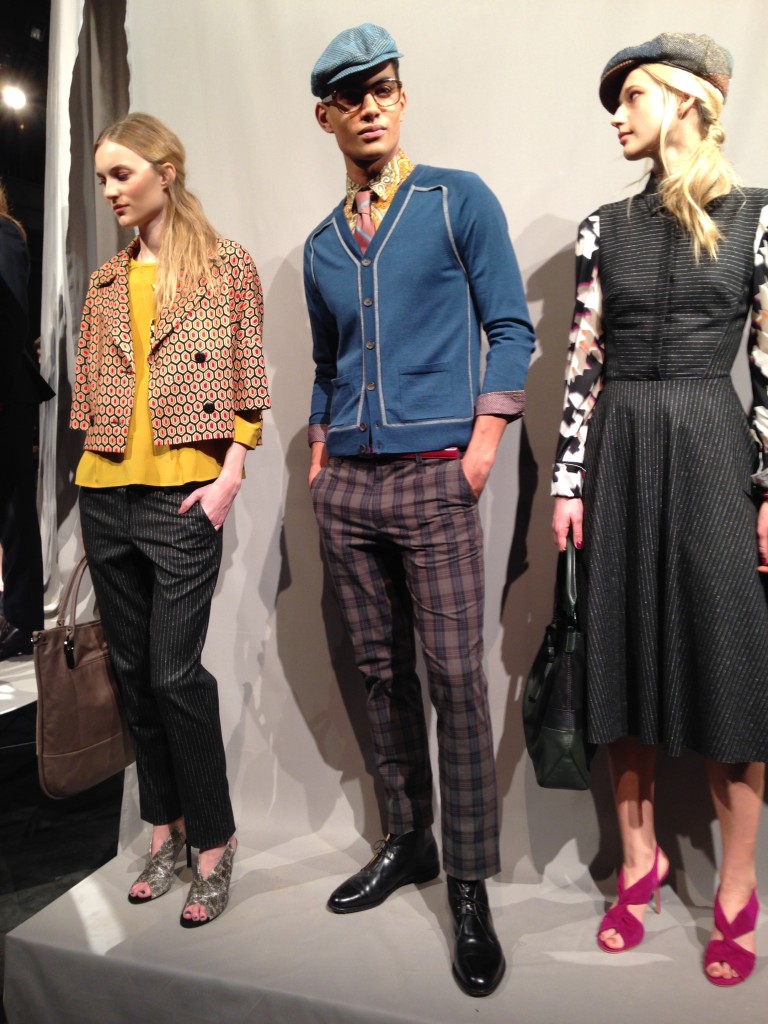 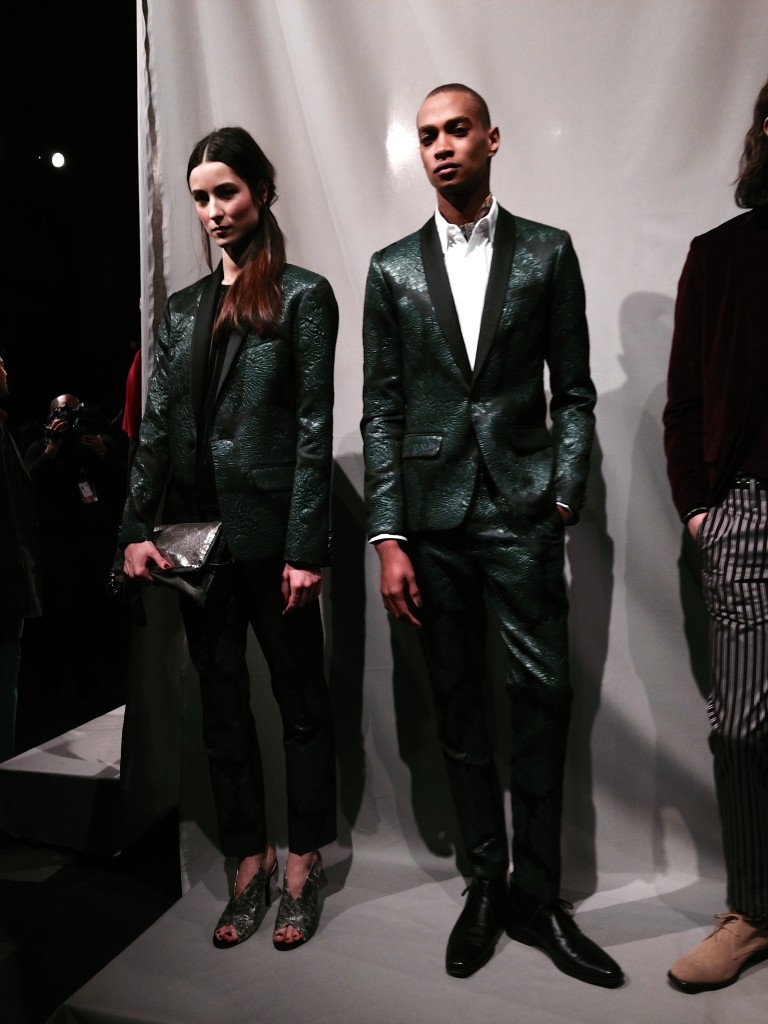 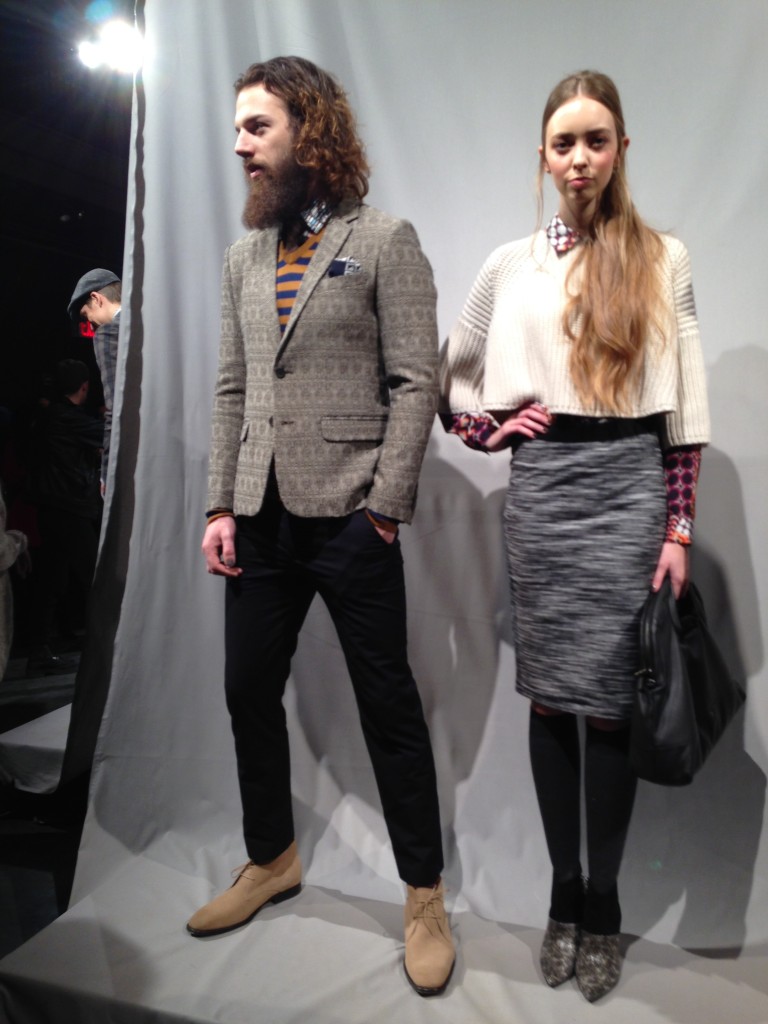 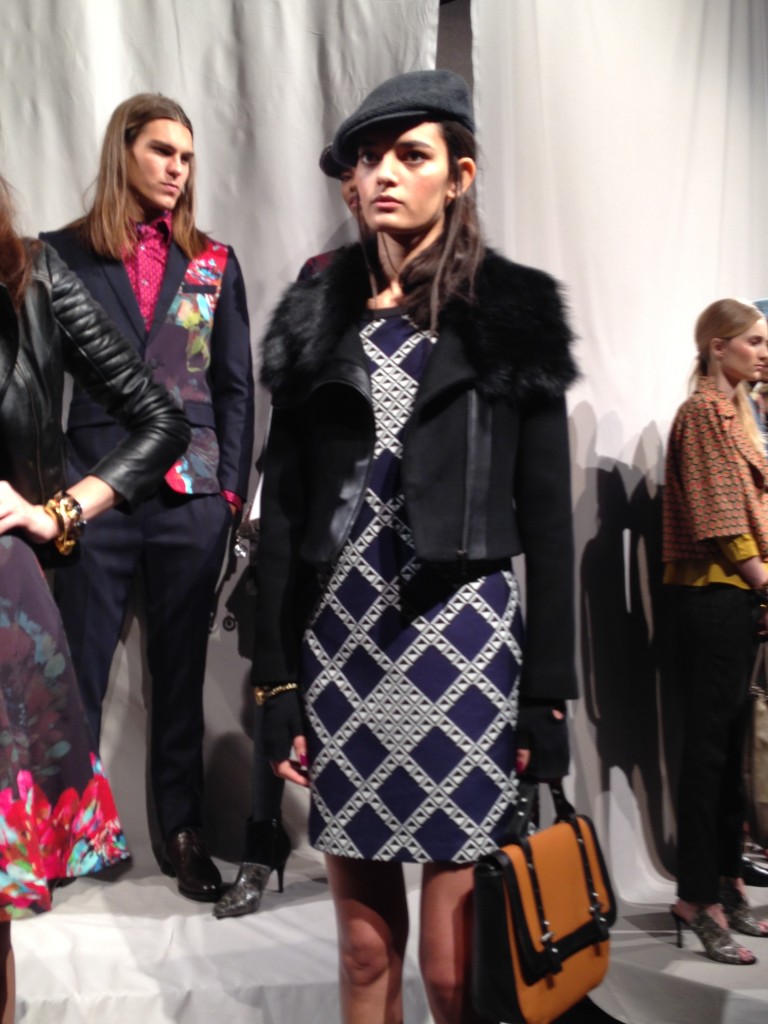 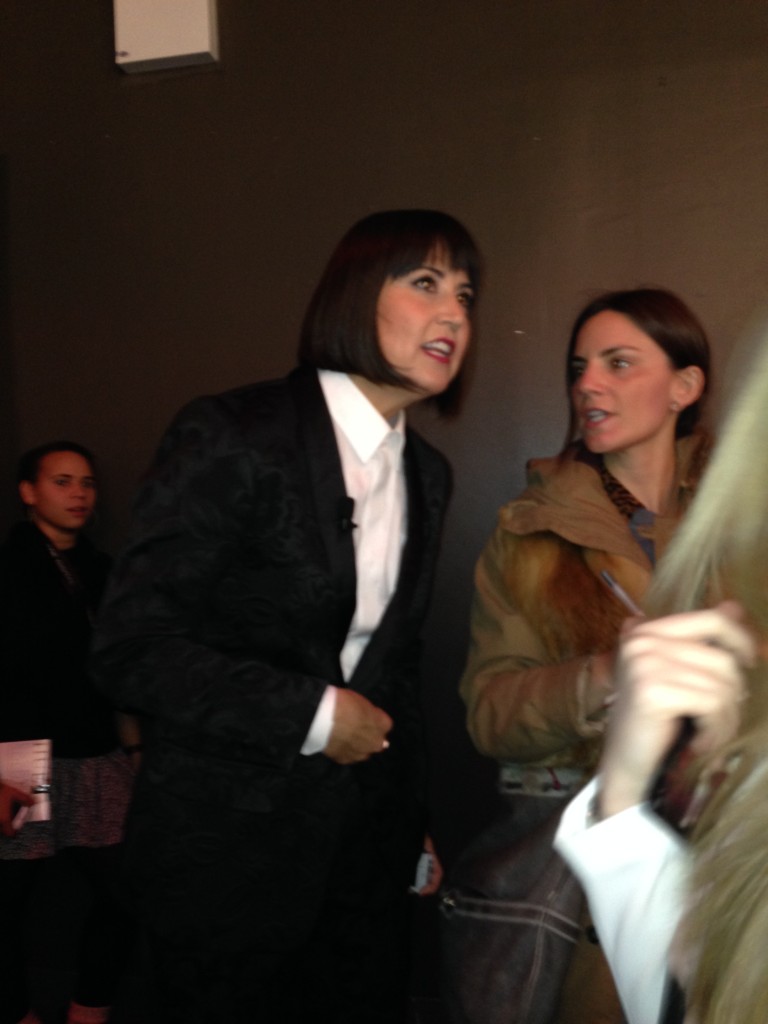