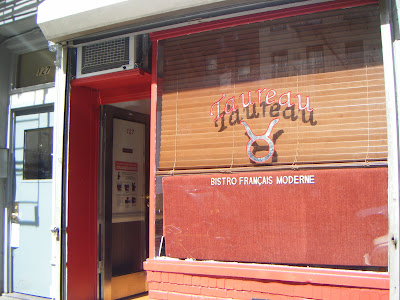 We met the engaging and excited Didier Pawlicki last night walking by his new French Bistro, Taureau, the adorable fondue joint, whose name means bull and is the latest foodie addition to our Strip of Seventh between Avenue A and First.

Heading to a pre-arranged 6th anniversary date-night dinner at The Redhead, we stopped to check out the resto whose opening I’d been anticipating since I watched them paint the name on the bistro window a week or so earlier. The door was open, the tables were set and there was a just-posted menu a couple of pages long on the side of the establishment’s entrance. It was in business! We commenced to perusing the pages.

Erin, the cutest little wait person ever, who’s eyes each looked like their own little smile when she did, came over to fill us in on the deets. Before long a gentleman was at her side, further explaining the types of vegetables ~ “not starchy and there are four or five” and how you could order as many as you wanted or needed, how filet mignon was on the menu but more for those who maybe needed to feel “snobby” because “the regular beef is the best anyway” and how the tables heat up in the middle so you yourself cook the main of your meal, i.e., beef in various oils ~ “but not like shabu shabu.”

In the back of my mind, I kept wondering if the man we were having the pleasure of walking us through the menu was chef-owner + proprietor, Didier Pawlicki, of the beloved La Sirène in Soho. And, yes, my suspicions were confirmed. This was the very first, the opening night and he was expecting a group of friends. But mostly he wanted regular people to try it out so he could see if the proportions were too much or too little, if he needed tweaking in the kitchen or in the front of house and if people liked what they were eating ~ “if they don’t like it, not that we don’t know that it’s good, because it will be, but if they don’t like it, they don’t pay for it.”

Pawlicki says he hopes to send people toward the 7th Street 38-seater when La Sirène (I’ve never been, but apparently it’s half the size) hits overflow capacity. To facilitate their acceptance, Pawlicki has placed a few of La Sirène’s favorites on his new offerings, cassoulet among them. The new spot is also BYOB, same as L.S., with no corkage fee. Of course, there’s also cheese and, wait for it!, chocolate fondues, all suggested for at least two people, but as Didier notes, there’ll be no judging. “If you want to share with four or eat all by yourself ~ it’s your free choice!”

Do be aware that Taureau is not EV cheap (but, really, what is these days???!) at approximately $22.50/person for 2 for fondue. It’s cash only, at least for now. But you get what you pay for and it looks like Taureau will be giving the other bulls around the block a run for their money. We can’t wait to try it; in fact, I’m hoping for some great beef fondue there tonight. I’m in favor of spending the whole weekend celebrating our 6th. And that’s no bull.