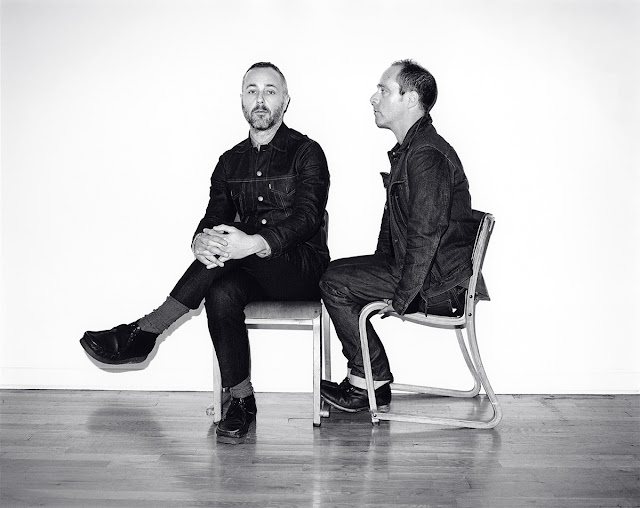 The award-winning designers just
wrapped up a particularly impressive New York Fashion Week, premiering their Perry Ellis by Duckie Brown Tuesday after a wildly successful turn down the runway the week before with Duckie Brown, the line they founded in 2001. 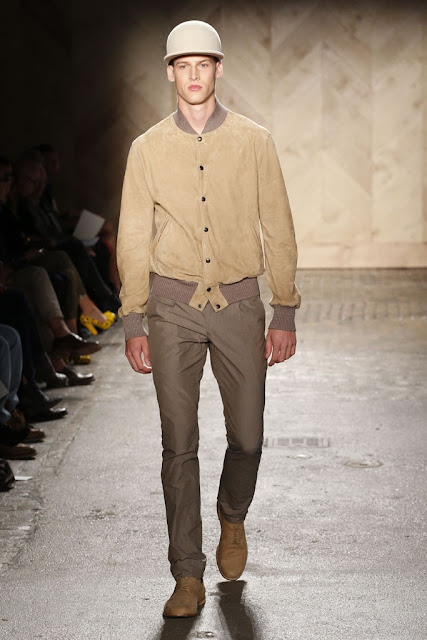 Perry Ellis by Duckie Brown photos (above and next two below) by John Aquino, courtesy of WWD 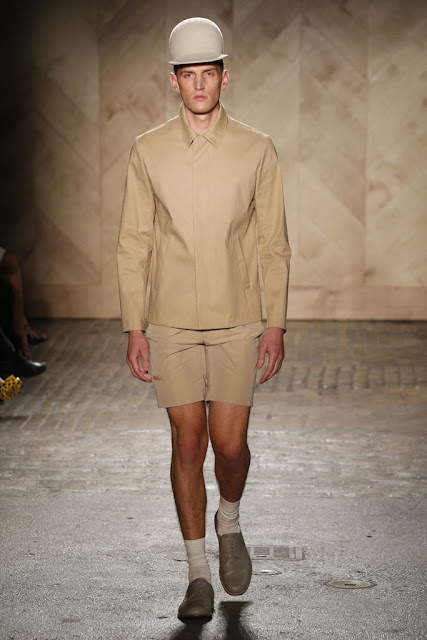 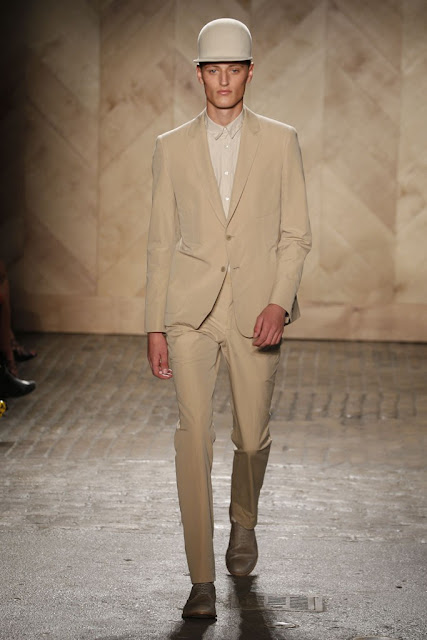 Within Duckie Brown, every season embraces innovation, wit and exacting tailoring, and, per their press bio, “each collection starts with the shoulder of a man’s jacket and then builds layer upon layer … .”
Just the way menswear should! At least, that’s the way menswear used to begin. Tailored clothing was always discussed in terms of point-to-point, the measurement from shoulder to shoulder, and in the past, the changes within menswear garments were nominal, maybe an eighth, a sixteenth of an inch at a time. 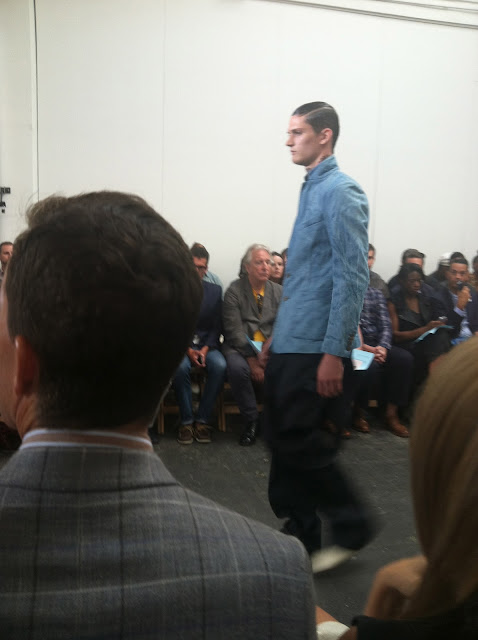 Today, those rules have mostly been thrown out the window. At Duckie Brown, changes can be voluminous, case in point, the pants silhouette from last season, that featured dropped crotches, below, and oversized legs, even in grey tweed. 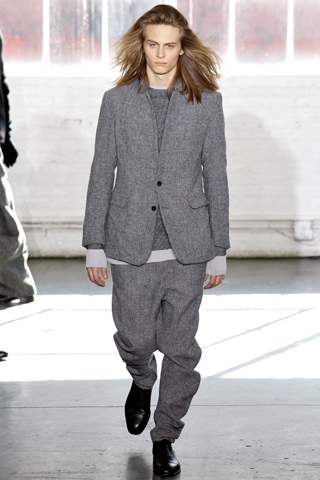 Duckie Brown Fall 2012, photo by Thomas Iannoccone, courtesy of WWD
The award-winning duo — Duckie Brown received a nomination for the CFDA Perry Ellis New Menswear Award in 2006, followed in 2007 with a nomination for the CFDA Menswear Designer of the Year — also are featured in London’s Victoria & Albert Museum show, New York Fashion Now, a retrospective of up and coming American designers, with one of their outfits now part of the museum’s permanent collection.
FashionWhirled got the chance to Q&A them for this week’s Friday:5ive.
FashionWhirled: What role does fashion, or style, play in your lives personally and as designers? How does each of your personal styles inspire or affect your designs for Duckie Brown?
Duckie Brown Designers Daniel Silver + Steven Cox:  DUCKIE BROWN IS A REFLECTION OF WHO WE ARE, WHAT WE BELIEVE IN. WE DESIGN FOR OURSELVES AND OUR FANTASY SELVES. 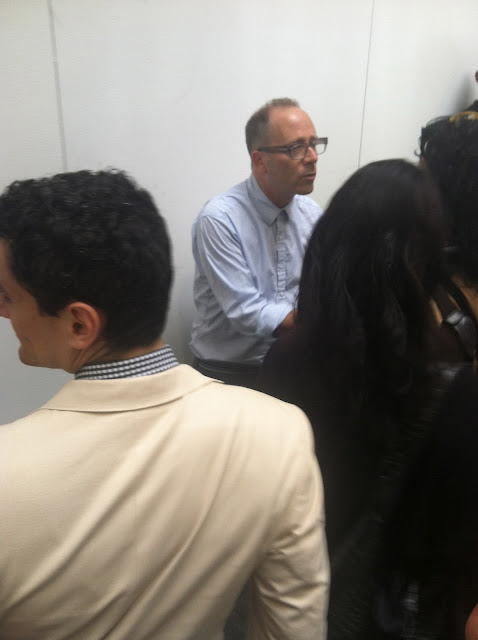 FW: What made you first realize you wanted to design clothes? Were you always into fashion and how? Tell me about your favorite fashion or designer pieces over the years? 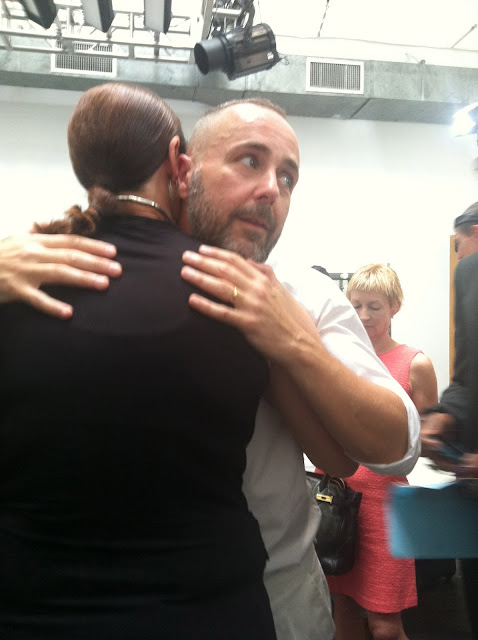 DB:  STEVEN HAS ALWAYS BEEN A DESIGNER AND STUDIED AT LIVERPOOL UNIVERSITY. 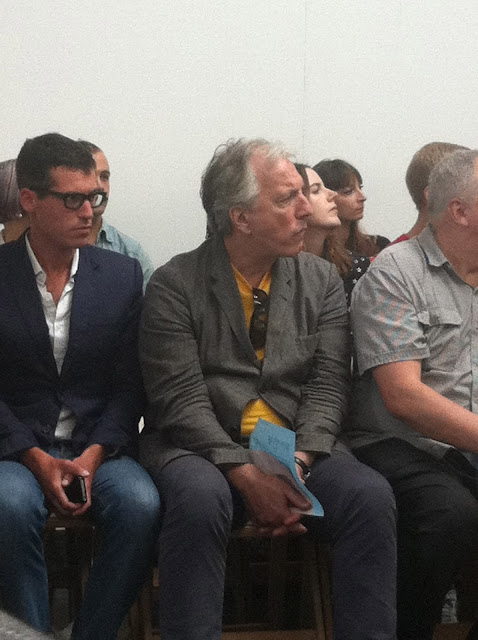 Actor Alan Rickman front row at the Duckie Brown SS13 show. A possible muse?!
FW: Who is the muse of your collection, or of each one of you individually, and how does s/he affect the choices you make for your own personal wardrobe or any style decision you make for the collection’s designs?
DB: WE HAVE MANY MUSES  –  OURSELVES AND SOME VERY CLOSE FRIENDS WHO INSPIRE US EACH SEASON.
FW: If you could have any notable individual — dead or alive — wear Duckie Brown, who would that be and why? What would you dress them in and why? How and why would you try to change their style? 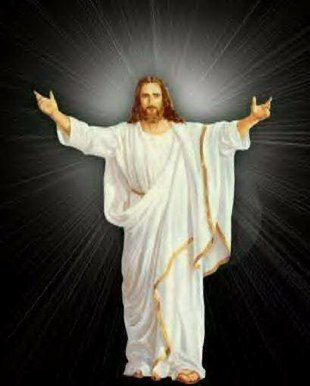 DB:  JESUS – HIS STYLE WAS SPECIFIC AND AMAZING – WHY CHANGE WHAT WORKS?
FW:What words of wisdom do each of you live by, or strive to live by? What legacy, fashion or otherwise, as fashion designers and as human beings, do you hope to leave to the future?!
DB:  EACH DAY IS “THE BIG DAY” BECAUSE IT’S THE ONLY DAY YOU HAVE – SO MAKE THE MOST OF IT. 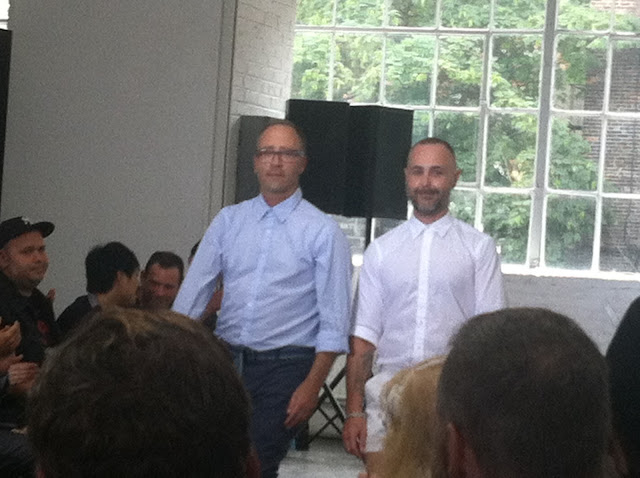