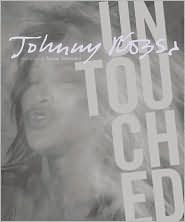 For years I have walked by a huge blowup of a glitter-y gold bikini bra wearing Mariah Carey (who actually used to be the coat check girl at a restaurant I worked at years ago, but that’s a whole ‘nuther story…) hanging in the window of Luster Photo on Avenue A. The blogger EV Grieve recently noted that the “arm pit sniffing photo” has been replaced. I think it’s now a photo of a lotus flower.

Turns out, the Mariah shot was lensed by Johnny Rozsa, my neighbor down the block, who I have bonded with over time regarding dogs and fashion. He’s got 2 Chinese Cresteds who model and a scruffy but adorable terrier-chihuahua mix named Stella.  He’s also incredibly fun and humorous with a a great sense of style. And, he loves the beach.

I ran into him earlier today and asked him what he’d be wearing to his book signing event at Barneys New York tonight, part of the Fashion’s Night Out extravaganza there. He said that he’ll be the “Queen in green,” and described his plans on popping with color, from his preppy style purple and green Burberry pants to a raw silk sport coat from Hong Kong he found that he says fits him perfectly.

With his cool sense of style, he could wear anything tonight and look amazing.

He’ll be there tonight autographing his new book, Untouched, which will be available for sale and signing from 7 to 11. Here’s what amazon.com has to say about his book:

“In this never-before-seen collection of 160 untouched photographs of some of the biggest names in Hollywood before they were Hollywood-ized by plastic surgery and makeovers, luminary photographer Johnny Rosza offers intimate glimpses, capturing nearly 30 years of his work. Rosza has photographed for the likes of Vogue, the Sunday London Times, and Ritz. Just some of glamorous stars included in this collection include Muhammad Ali, Halle Berry, Daniel Day Lewis, and Winona Ryder.”