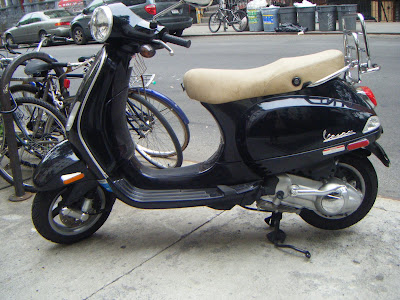 Yes, it’s official. It’s not only shoes…now I also have a Vespa fetish. Well, actually, it’s been there, simmering, for some time.

From the moment Vespa re-opened sales to the US in 2001, I have fantasized about owning one of these pint-sized Piaggio precursors to a full-blown motorcycle (although, personally, if I could and had a choice, I’d prefer a Ducati! I just fear one of those Italian Stallions would squash me when it fell on top of me at a red light ~ and, trust me, it would ~ just like the rolling clothing rack that toppled onto me in front of the Javits center when we were striking the Nick & Mo booth after FAME. I’ve always relied on the kindness of strangers, and this was no exception, as no less than 4 people ran to my rescue, including a, I swan, Southern gentleman, a delicate Asian chick who bellowed directions — “Put your foot on it!” — and a woman I swear was well into her 70s and who was instrumental in re-attaching the huge HEAVY clothing bag that fell off the rack back onto the rack.).

When I saw this magnificent mode of transportation on the street the other day, it took me back. To Italy, specifically. Years ago, I rented one of these classic scooters in Florence during a Pitti Uomo trade show and drove myself from the Fortezza da Basso up into the gorgeous foothills of Firenze. It was pure love, bliss & adrenaline maneuvering on the sassy switchbacks, the sun peaking gloriously through the leafy canopy overhead, and all I had to do was leave my calling card with the company as proof of identity. An actual telephone calling card! Yet I never had the opportunity to repeat the experience, either there or Stateside.

Call it history or call it legend, but as the story goes, the first prototype was nicknamed for Donald Duck, of course, in Italian, because of its weird shape. Enrico Piaggio apparently hated the look of it and asked for a more aerodynamic design from his aeronautical engineer, Corradino D’Ascanio, who revolutionized “motorcycle design logic.” Since all the controls were placed on the handlebar, riding was easier not only for men but “for women and priests” as well, the quote attributed to D’Ascanio himself.

When Piaggio heard the engine crank on that second prototype, named MP5, he supposedly exclaimed: “Sembra una vespa!” (“It looks like a wasp!”). It probably sounded like one, too, due to the high-pitched screamin’ made by the two-stroke engine. And, hence, today’s name for the somewhat wasp-shaped moped, with handlebars forming the likes of “antennae,” and its front and rear sections connected by a shapely waist-like footboard, stuck like a stinger in the calf of pop culture.

Today’s newer models are streamlined, smooth and suave. Safe? I’m still not so sure. But fashionable? No doubt. Accoutrements these days are as vast and varied as the offerings on the accessories floor at Bergdorf’s. Helmuts that color coordinate not only with your ride, but also your Balenciega “bandals.” Saddle bags for Whole Foods goodies. Windshields wipers for inclimate, showery NYC summers. Animal skin-inspired seat covers. 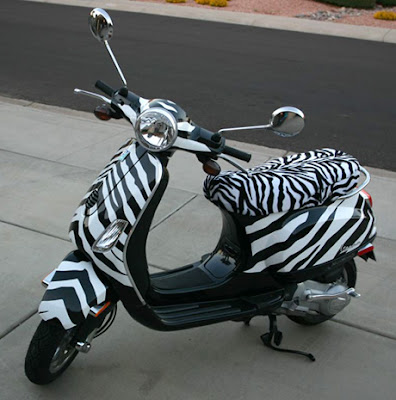 And never mind mentioning the whole E.C.-ness (environmentally correctness) of the vehicle. One cheeky Vespa-oriented website chides: “Try to not be a gas-hole!” Quite clever, if a little tacky. But, well, you get the point….

And, so. My advice to all? Motor forth, ferried on the wings of a wasp!