! ! ! The one thing we couldn’t do at last night’s Fashion Icons discussion with Bruce Weber, led by the ever-on-top-of-the-industry Fern Mallis at the 92Y, was take pictures. We tried. God knows, we tried. Ushers ran down with flashlights and practically flogged us if they saw our phone screen light up. Wasn’t the whole point of the evening about photography and the man?! I wanted to show his face, see the photos that went with his stories.

Oh. And the stories! The stories were fascinating, captivating, inspirational and envy-producing. Bruce on his signature bandana?
It started on a hot, steamy, muggy shoot in Australia with Grace Coddington, where he was wetting a bandana and wearing to keep cool. The style stuck. Now he has drawers full of them at the homes he shares with wife Nan. Note to self: do not send Bruce a bandana for Hannakhuh this year!

Reminiscing about his childhood, he divulged that Sundays at the Weber household, which was right next door to his maternal grandparents, consisted of family photo-taking, water coloring, piano playing. All the things a well-rounded creative family would partake in, as I would think. He called his family dysfunctional! I might call it heavenly. Sundays at my house were filled with fights about going to church, fights about the family meal, and more fights about homework before going to bed. Early.

Bruce talked about his love for his dogs (he has six now; they are wintering in Florida as we speak), elephants (one name Tay, in particular) and his extended family, all his “friends that he just asks to come along and shoot with me.” He spoke of using film to “loosen up” for photos. He spoke of being nominated for an Oscar for his Chet Baker film “Let’s Get Lost.”

Personally, I loved that Bruce admitted that he wished he could write better and that he loves that you can touch a print (over the digital photography of today). His advice to aspiring photographers? “Don’t get caught up in what you think you should be doing. Read a lot. Find your own path.” He feels that great designers are like great editors and spoke a lot about his work on shoots for and with Ralph Lauren, Calvin Klein –  all his friends and family, as he refers to them.

There was a reception afterward that I somehow missed (would have loved to say hello to my old employer, the great Ralph Lauren!). But I was, thankfully, able to snag some shots from friend and colleague Tom Julian, who as always, has his feet on the ground and his phone camera firmly planted in the air. Thanks, Tom! 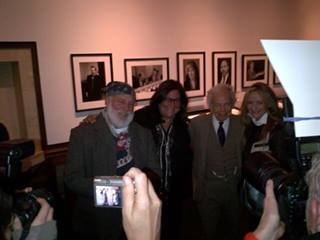