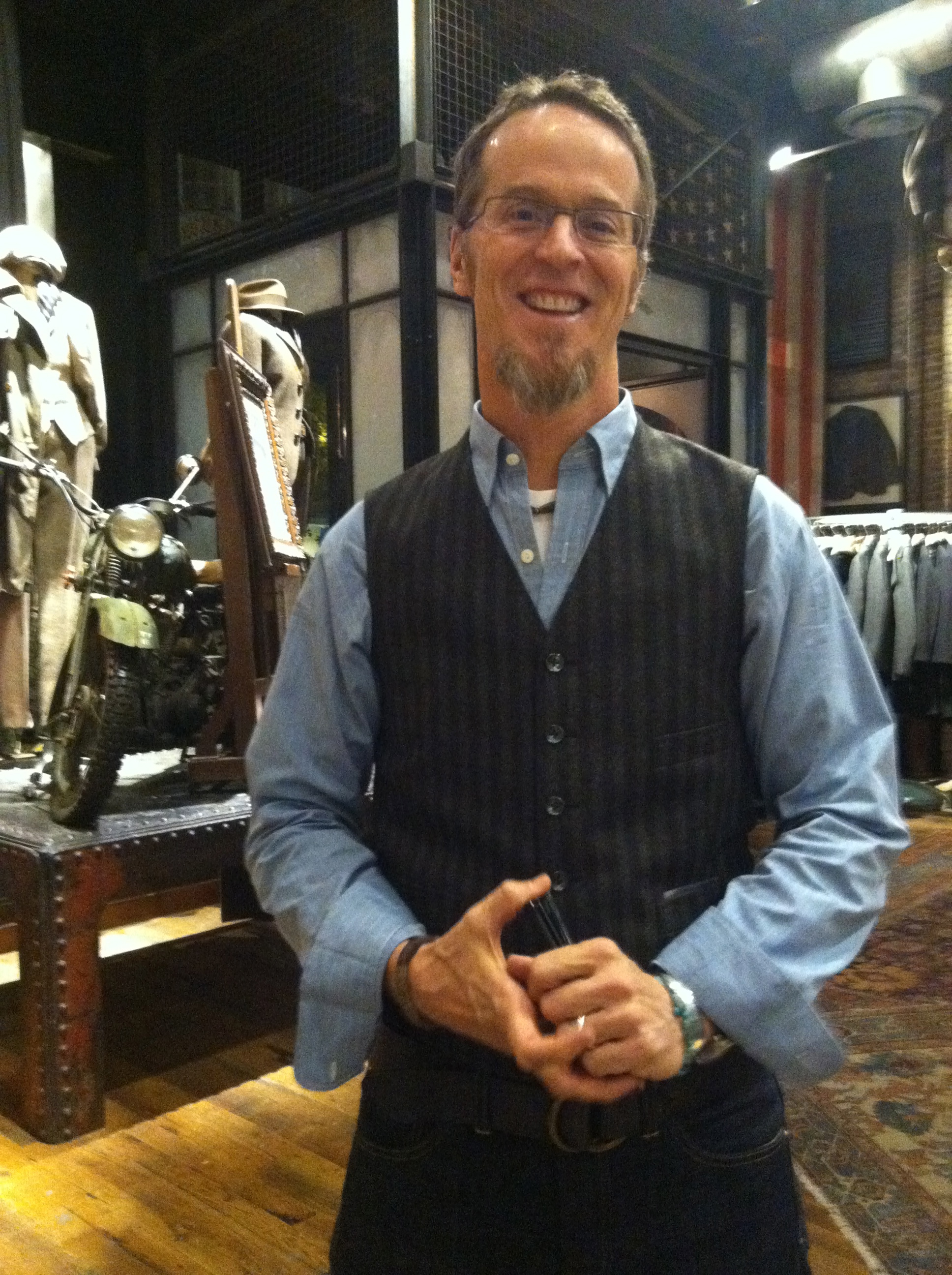 I swear, I’m movin’ to Montana soon. Gonna be a dental floss tycoon. Well, that’s “Montana,” according to Frank Zappa.

But seriously. I’ve never seen so many chic cowboys as I did at last week’s book signing party for photographer Robb Kendrick. The Ralph Lauren RRL boutique on West Broadway became the crossroads of Chelsea gallery walk meets Madison Avenue meets Bad Dog Ranch. The ultra-talented artist, above, looked like a gentleman cattle baron version of one of his gussied-up cowpoke subjects straight out of Still: Cowboys at the Start of the 21st Century, Robb’s tintype artwork photography book featuring the modern American cowboy. These cowboys were all shot on location and styled the way they came, in other words, not styled at all. I was quite impressed by what we fashion folk would consider their trendy, highly stylized outfits, which are just another day at the ranch for them. Funny, considering where we were that night — the retail bastion of “authentic” ranch and cowboy dressing. 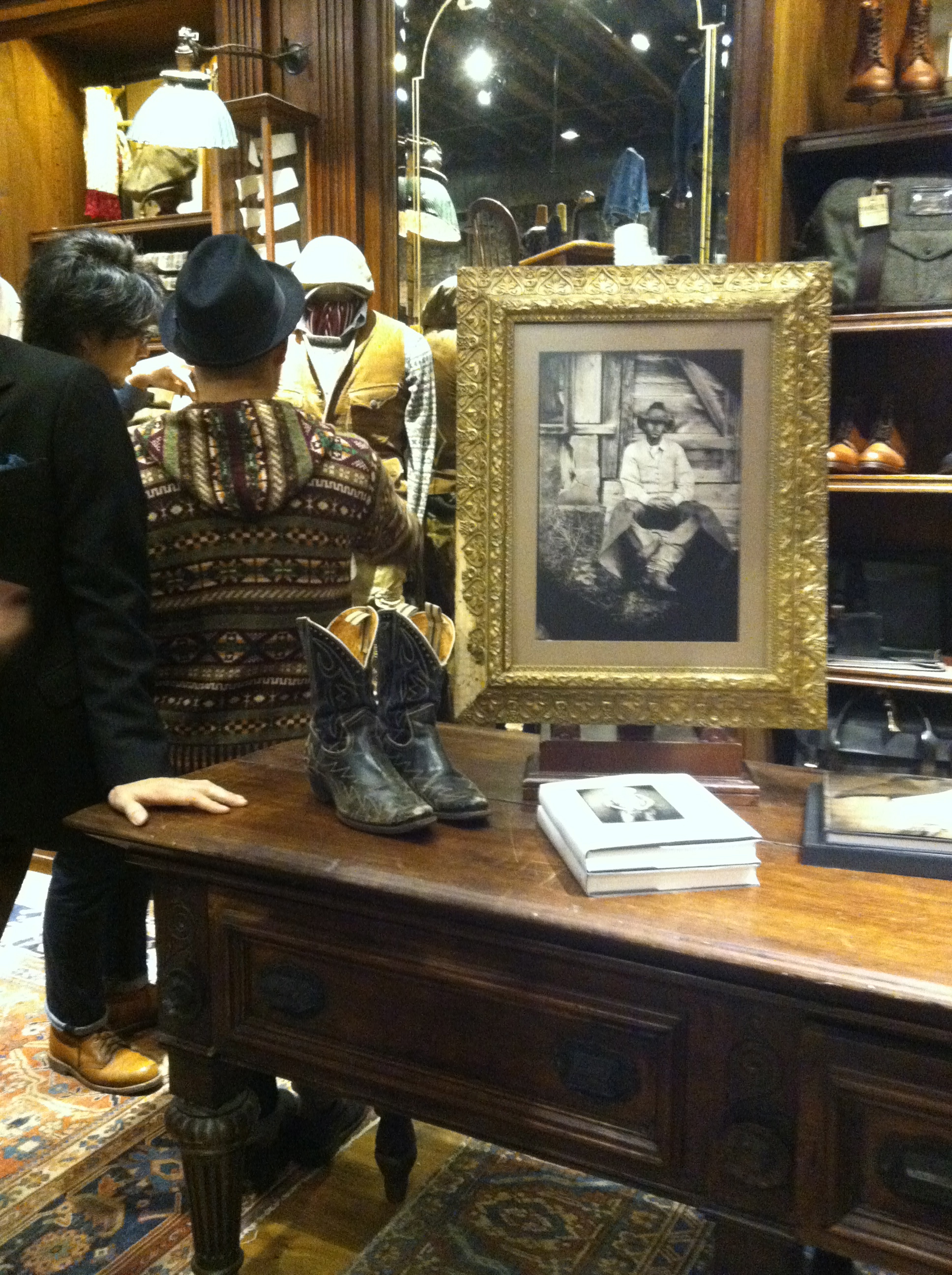 Lucky for us, we got to meet more than a couple of those modern American cowboys. Cliff, the cutie cowboy from Montana, showed us the ropes, as it were, of the cowboy way of dressing. He said cowboys spend what little money they make — and, trust us, it didn’t sound like much — on silver and finery. But they really do look like a million bucks (which is also how you’d look, too, and closer to what you’d pay, if you assembled the “look” from RRL. Ralph’s fare is gorgeous, but it ain’t cheap.). 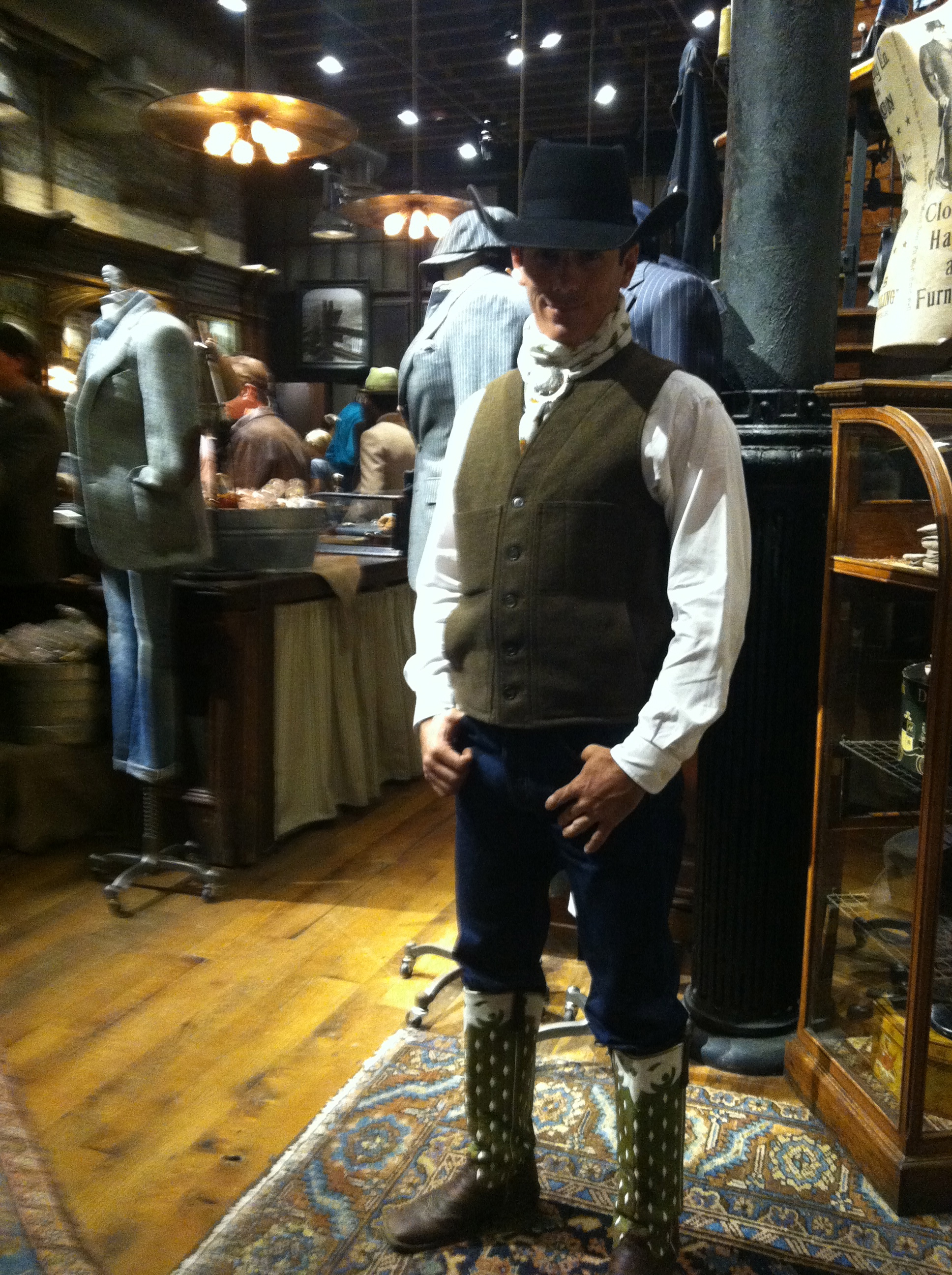 Everything Cliff had donned that night was authentic, from his hat and vest down to his square-toed boots. He taught us that tucking jeans into boots is known as “shot gun” style. And that you can tell where a cowboy hails from by the shape of the crown of his hat. The squarer his crown is, the more from up north he is. Super square indicates as far north as Canada. I never found out if square toes correlate to any geographic point, north or south. 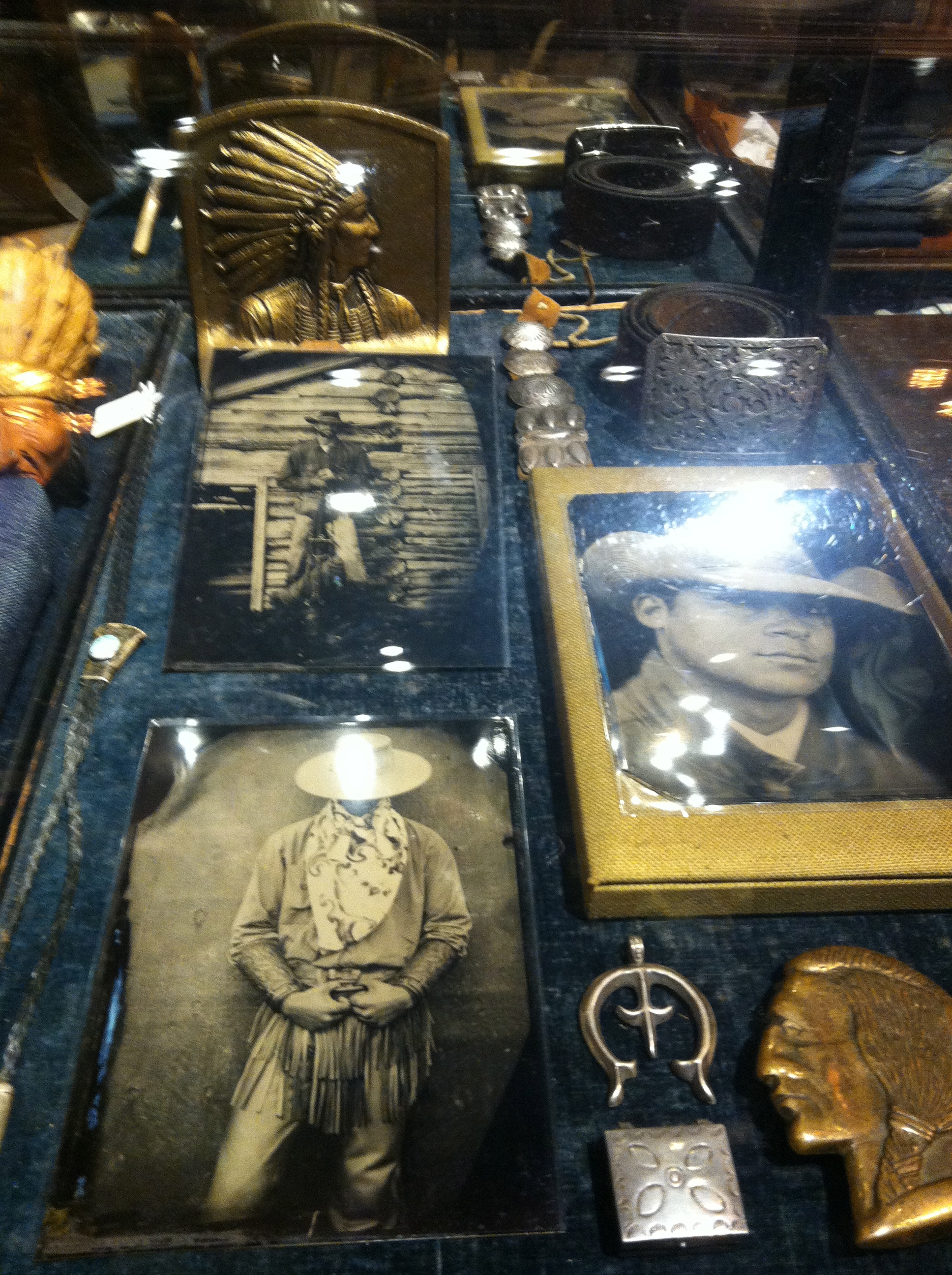 Cliff also explained that the fringed “skirt” that some cowboys wear, like the one on the cowboy, above, who graces the cover of Robb’s book, isn’t a skirt or belt at all, but chaps called armitas. The pieces of leather, the fringe, give purchase in between the saddle and the rider’s legs, helping the rider stay in the saddle during roping, or whatever. “Stovepipes” are the straight, narrow chaps (and Cliff pronounced this with the soft “SH-aps,” which is apparently the way English-speaking riders in the West and Canada say it, although in the East we say CH-aps. Interesting.).

Another real cowboy we had the pleasure of speaking with, Jarrett, below, 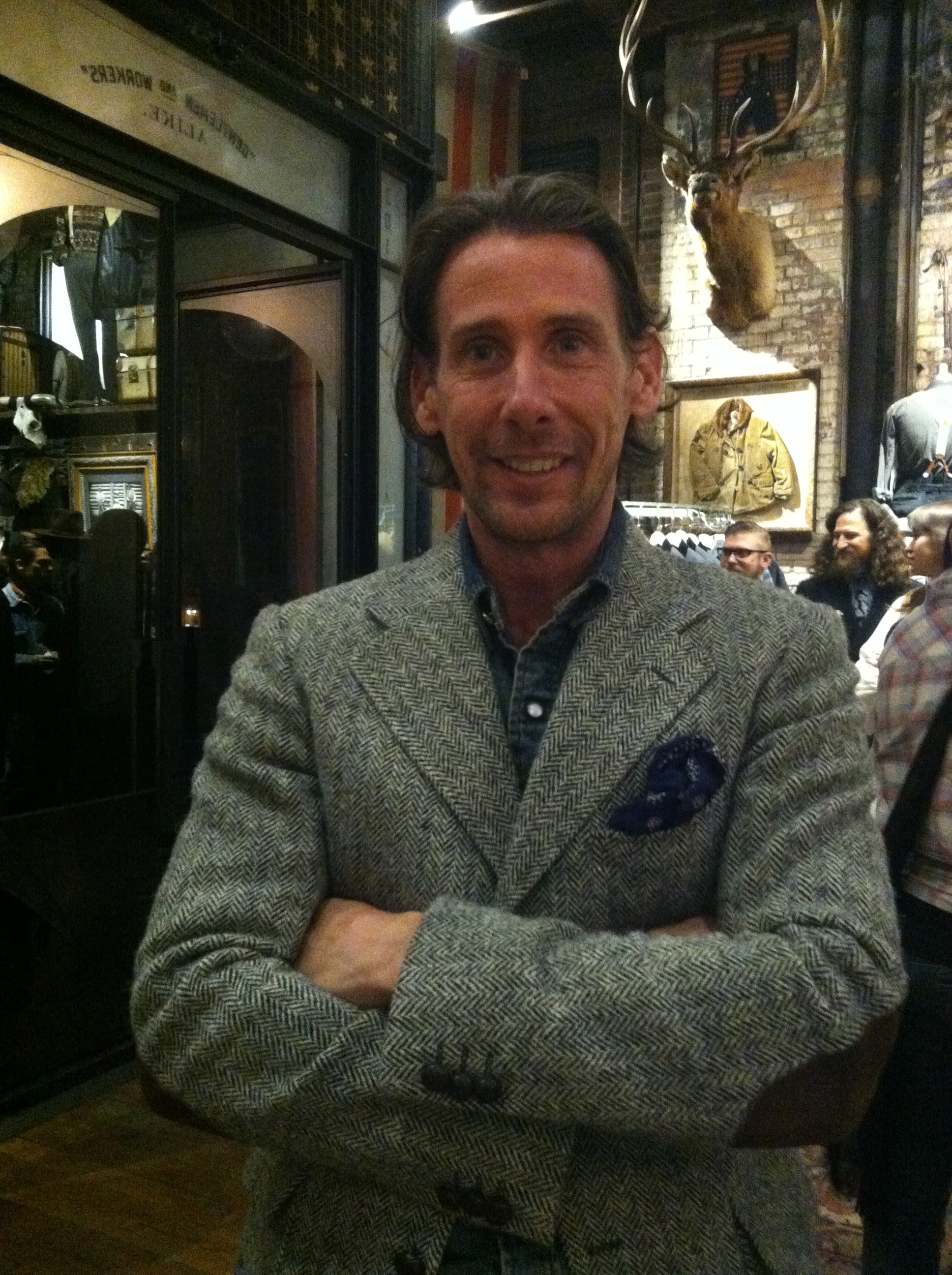 Real cowboy Jarrett, who also happens to be a Ralph Lauren RRL manager

had been a “cutter” (a cowboy rider who separates, or cuts, a cow from the herd, heading him off with his horse) who, post-cowboy career, lived in Charleston (wow, somehow there’s always that connection for me) and is the current RRL manager at Bleecker Street. He said he got out of the business after he was “broke and broke” — financially and physically, with many a cracked bone, to boot.

One of the prettiest cowboys, er cowgirls, we got to hang with that night was Ashley Riggs, a friend of Robb’s and his lovely wife Jeannie. Ashley ended up on the cover of National Geographic Greatest Portraits after Robb recognized her style, grace and beauty while shooting at her father’s ranch in Nevada. Ashley, who was homeschooled and raised in Nevada, is now one of the designers at RRL, a storybook ending if there ever was one. 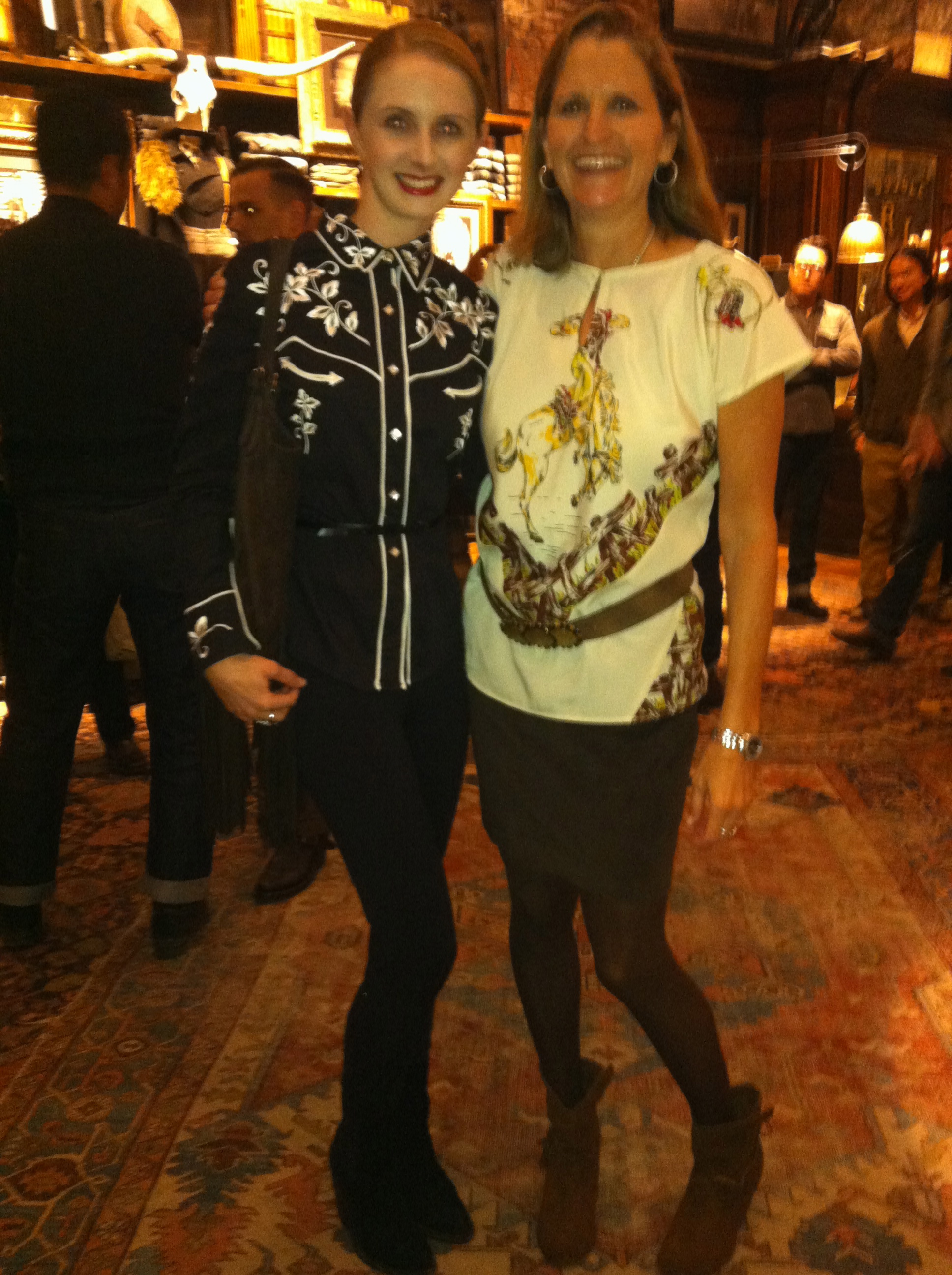 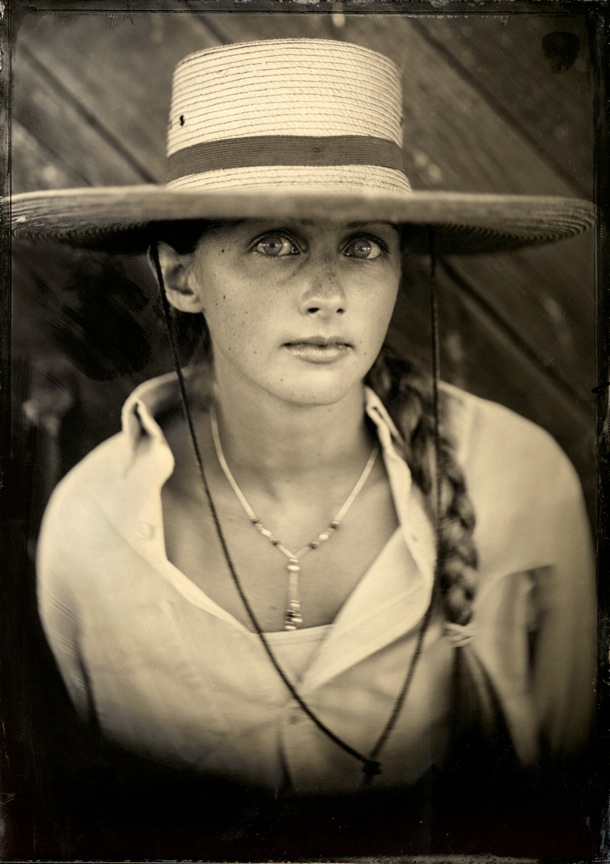 Ashley Riggs on the cover of National Geographic Greatest Portraits

Her partner, designer Cody Hammond, below, a ranch-centric individual from West Texas, rocks true Americana style. As producer of the event, he helped get the word out about Robb that night and none of the fabulousness of the evening could have happened without him. His hat doesn’t look square anywhere that I can tell. 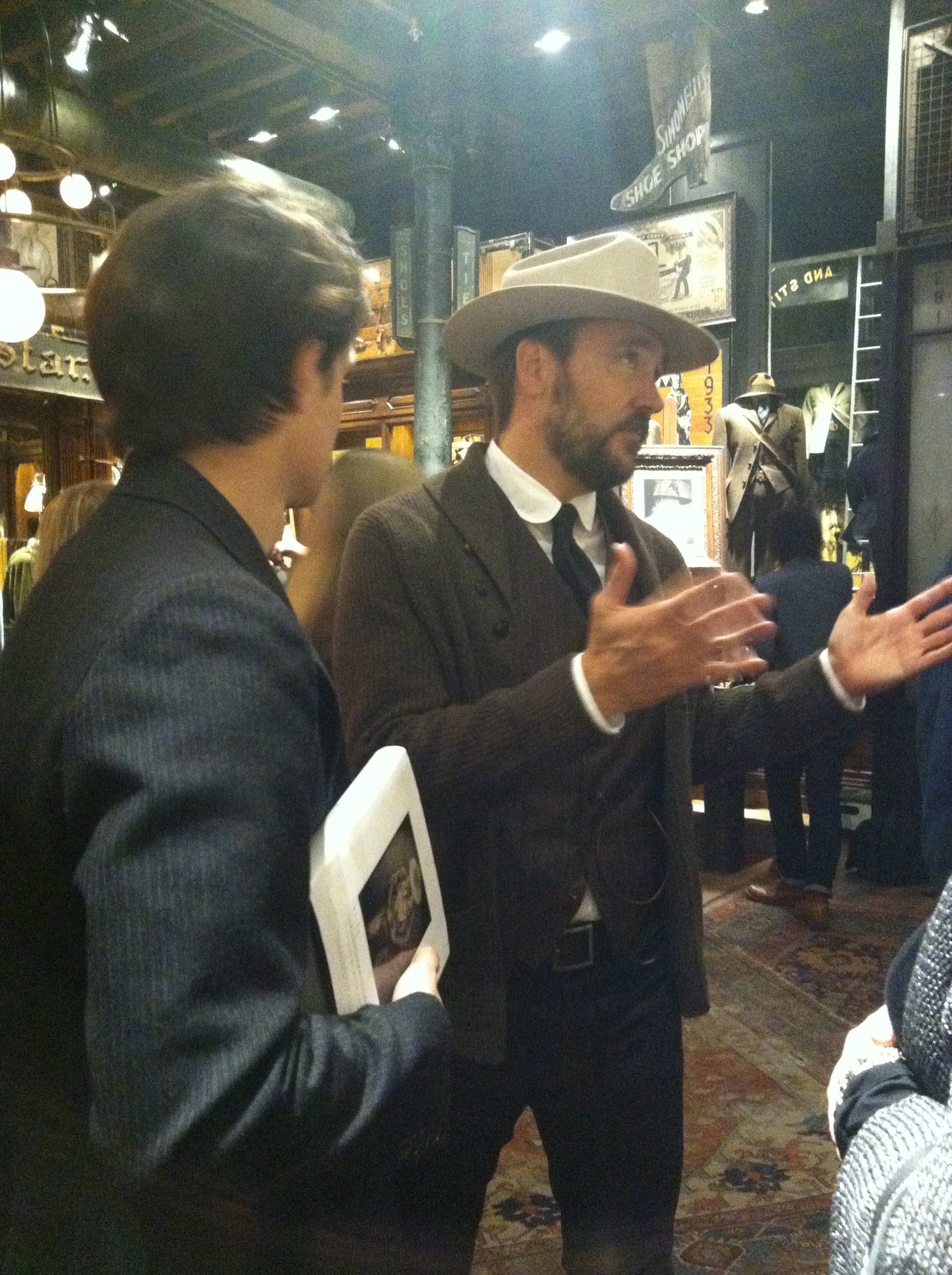 Many of Robb’s beautifully hand-made tintype prints adorn the store, from inside changing rooms to inside jewelry cases, sprinkled amid the RRL clothing that rings true with heritage and authentic style. There was also a Nat Geo-produced video that looped throughout the night, following Robb’s process, capturing him as he shot on location with an individual cowboy, hauling a “dark room” trailer filled with scary chemicals behind his truck.

Both Robb’s book and artwork will be available at the West Broadway boutique indefinitely, as it’s part of the permanent Ralph Lauren collection. Don’t miss it. Lasso some modern cowboy tintype art, then ride off into the sunset in style. 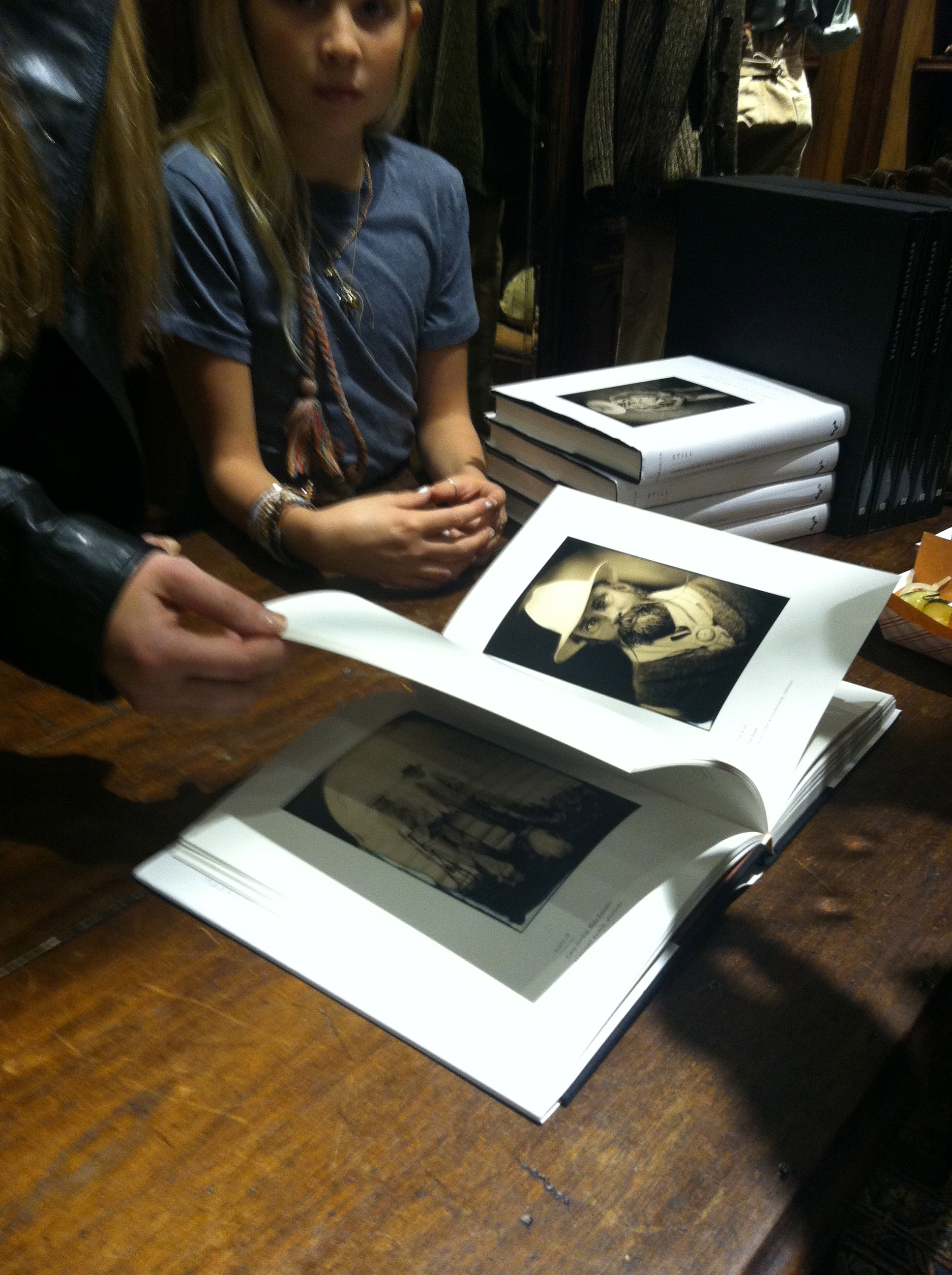 Still: Cowboys at the Start of the Twenty-First Century by Robb Kendrick