When I first saw Willy Wonka, the movie, I played “Pure Imagination,” the song, every morning on my computer for about a month, until my husband — and probably my neighbors — didn’t have any imagination left anymore. The song, for me,  was pure inspiration, riling me up for a day of creativity and productivity.
Much as it must have been for songstress/jewelry designer Shana Farr, for whom the composition held such meaning that she named her debut jewelry collection “Pure Imagination by Shana Farr.” 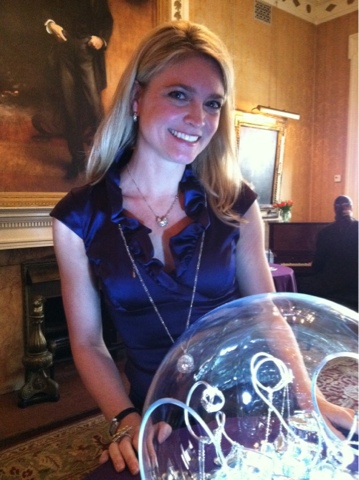 Presenting that new collection at The Players Club on Gramercy Park this morning, Ms. Farr entertained, singing her inspirational favorite, as well as some of the other American standards in which she’s so well-versed, like “Over the Rainbow,” a snippet of it here, below.
Ms. Farr is a doll of a New Yorker, a heart-of-the-Midwest transplant from Missouri 13 years ago. While singing held the key to her heart, she fell in love with jewelry while working at Harry Winston (who wouldn’t?!) and she followed her heart until the journey culminated in her creative combination this morning.
She said her number one fav piece is the Fortune Cookie pendant at her neck, inspired by, what else?, one fateful Chinese take-out dinner, which — just when she was questioning whether to take the plunge into jewelry design — included a fortune cookie extolling the advantage of using the doors that were opening. She took the cookie’s fortune to heart.
Now, all her Fortune Cookie pendants come with lyrical messages, like “Dreams that you dare to dream really do come true” from Over The Rainbow, as well as other song lyrics. Personal messages can be included, too.
Shana’s second fav design is the Bouquet floral ring, which has an outside band that spins when touched, something she loves to play with while speaking or just thinking.
As Willy Wonka said, “Hold your breath. Make a wish. Count to three.”
And in this case, then just sing and design to your heart’s content. 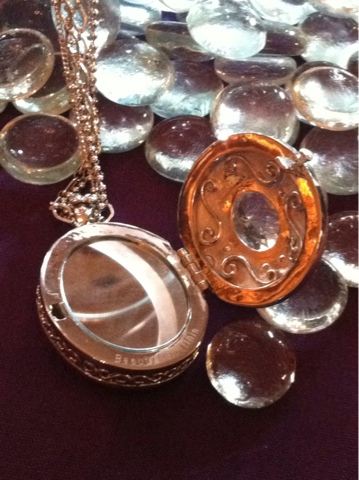 one of the Secret Garden mirrored lockets 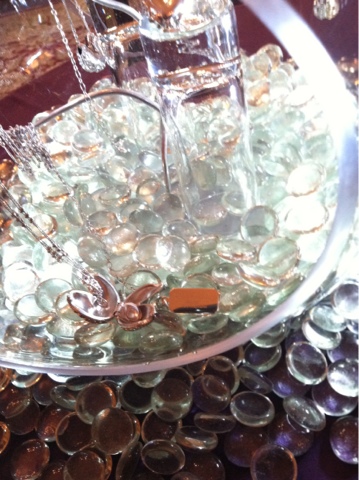 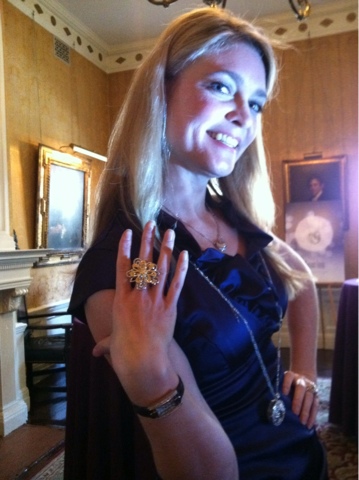 Shana wearing the Bouquet ring, above
Bouquet pendant, below