One of the nicest gents I’ve met in my many recent menswear sojourns out and about, from our MensWearNetwork gatherings to AskMen Academy evenings, Mike Crooks is the real dapper deal. Hailing from Atlanta – yes, he’s got that Southern Charm, alright – Mike is as sweet as he is fashionable. FashionWhirled was able to nail him down for his astute and educated take on stylish dressing, his haberdashery choices and, naturally, his unique way of rocking a bow tie and no socks.

FashionWhirled:   What role does fashion and style play in your everyday personal life? You are one sharply dressed dude; what is your creative process for dressing everyday? For dressing for a special occasion? 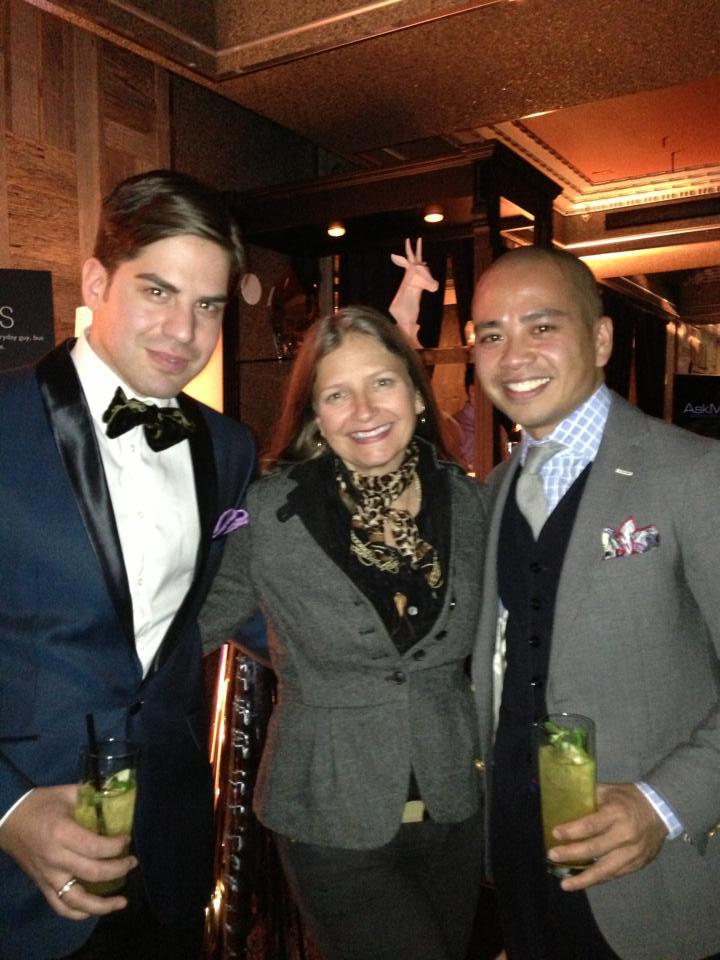 Mike with Michael Arguella and me

Michael Crooks:  This answer has probably been recycled more than once, but for me, style is more important than fashion. Fashion denotes a current trend regardless of its appropriateness for an individual’s sensibilities or body type. Style is understanding 4 things – fit, proportion, nuance, and restraint – and how that all relates to you personally. Fashion is a moving target; style never changes. In my day-to-day life, I try to leverage style to convey something significant about myself to another person in a split second without having to explain it verbally. Because visually, if I can convey that I understand nuance, restraint, and proportion, perhaps it’ll be more likely that the other person will assume I understand those principles about other things in life – humor, manners, timing, and so forth.  It’s also about dressing appropriately for the occasion and for the company that you’re going to keep, because that’s ultimately a sign of respect. There are times that call for a V-neck tee and jeans, and times that call for a velvet bowtie. Just make sure the V-neck is plain white and fits well, and that the velvet bowtie is a solid dark color to compensate for the luxe fabric. fit, proportion, nuance, and restraint. 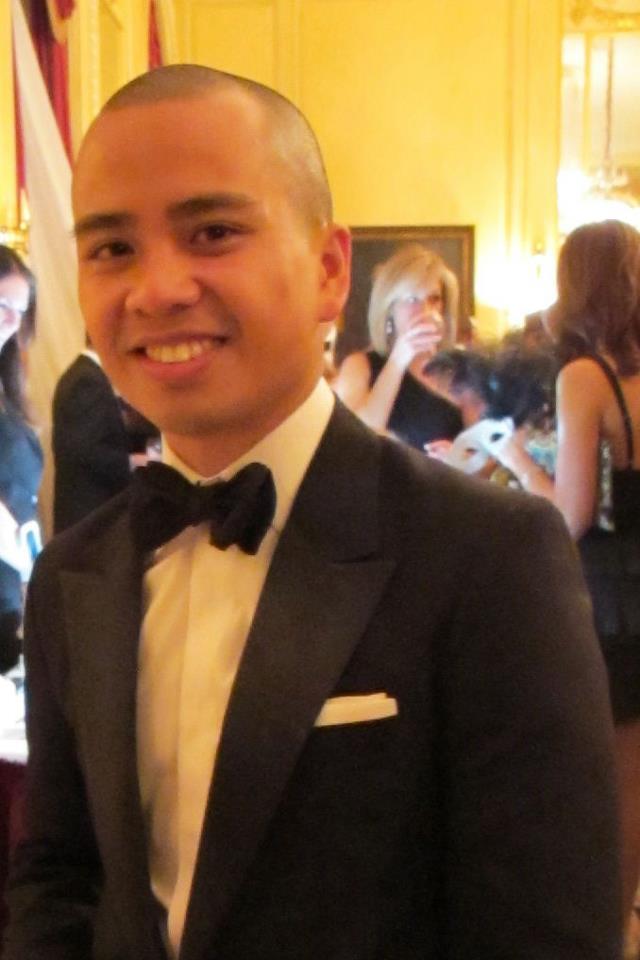 FW:  What was your “Aha!” moment that led you into the fashion world? What’s been your favorite piece of clothing EVER?!
MC:  I never had an “Aha!” moment actually. Professionally, one thing led to another – Lord & Taylor buyers recruiting on my college campus, running into various designers in New York, deciding to give digital marketing a try when the opportunity came up – it was about being open to new ideas and avenues that I didn’t consider before. At first I wanted the quintessential dream, which was to be a menswear designer, but after giving that a shot and comparing it to digital marketing, I realized I liked the latter a lot more. There are a lot of roles in the fashion industry, and oftentimes you’ll end up somewhere you never imagined – but that flexibility will likely result in being more happy and satisfied with your path.My favorite piece of clothing will have to be what I’m wearing right now – a navy and tan windowpane linen check blazer from Gant Rugger. The shoulder is completely natural, but that’s balanced out my a mean peak lapel and decently suppressed waist. Either that or my English tan leather motorcyle jacket from Coach. Totally simple, but completely mean.
FW:   Who is your muse? Why and how does she/he/they inspire you within the realm of fashion and style?
MC:  My muse is the guy I worked for as a buyer and assistant designer – Sid Mashburn. The man taught me everything I know about style. His own style is completely distinct without having to put a logo or label on it – an amalgam of Italian, prep, and the southern US. Aside from being a Zen master of nuance in design, he also taught me that it’s ok to be a red-blooded American male who likes college football and red meat, but also be into clothing. He is 100% authentic through and through, and it’s refreshing to see in an industry that emphasizes costume and aesthetics.
FW:   If you could have one designer – dead or alive – redo your wardrobe, who would that be and why? What pieces would you want added to your wardrobe that you already do not possess?MC:  Sid already redid my wardrobe, so this is kind of a tough one – I guess I would have Tom Ford come in to add some of his signature. Oftentimes he goes too bold and luxe for me, but he does understand one crucial underpinning of menswear that a lot of designers miss – that most men dress to feel masculine and desirable. It’s a simple point but often overlooked in design in lieu of pure showmanship. He understands how sex ought to be fused into the nuance of men’s clothing, and you see it in everything from his fragrances to the cut of his suits.

I need a pair of double monkstraps, because during my gig with Sid I forgot to pick up a pair of his. They’re perfect – English bench-made, with the last tightened up just so in order to make it a little more current. Also I need a leather jacket with a shearling collar. The rest of the details would stay really simple because the shearling would be a statement in and of itself. And definitely in English tan. Finally, a Rolex Submariner with a green bezel. It’s a shame that such a quintessential and foundational watch has been given a bad name by New York investment bankers and startup fiends; hopefully it can reclaim its rightful social status one day as the classic gentleman’s watch.

MC:  What words of wisdom or inspiration, or daily affirmation do you at least strive to live by? And what legacy, fashion or otherwise, do you hope to leave to the future and why?MC:  Be fair, but be willing to fight for what’s yours. Smile. Open doors. Have a strong handshake and look people in the eye. Tell good jokes and make every effort to put people at ease. Be strong and bold, but be nice. and for goodness’ sake, know how to have fun. 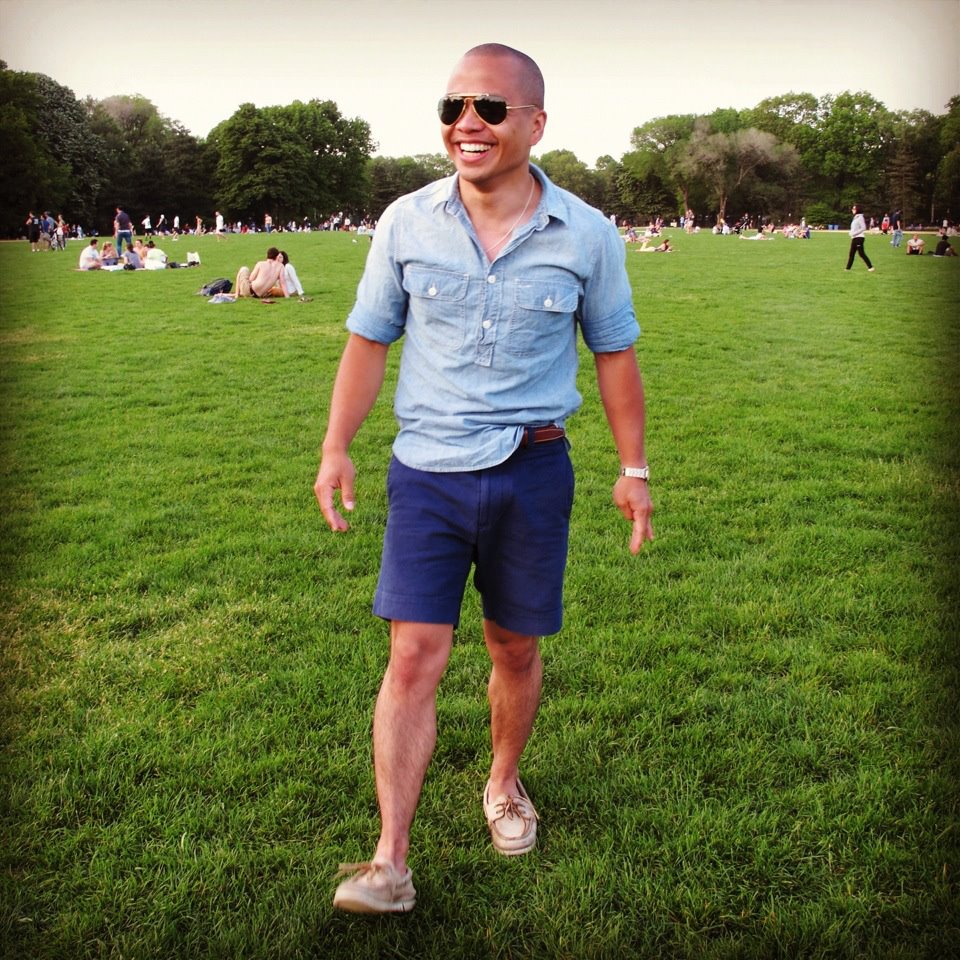 My answer to this has somewhat been baked into my other prior answers – understand what works for you. Be comfortable in your own skin. Respect nuance, proportion, fit, and restraint all within the lines of individuality. A grounded appreciation for clothing is a masculine endeavor, as it seeks to portray what’s best in a man in every scenario. But at the end of the day, they’re just clothes 🙂 it’s more important to get out there and live.

Having fun with clothing at a costume party during work

2 thoughts on “Our Friday:5ive: the Stylish Michael Crooks”