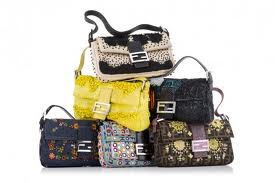 With the Baguette’s anniversary comes a coffee table book released by the Italian fashion house capturing celebrity stories of the beloved bag — helloooo Sarah Jessica Parker and Patricia Field! — and Fendi’s celebration of Baguettemania last week at its Madison Avenue boutique, fêted by hosts Annabelle Dexter Jones, Byrdie Bell and Hilary Rhoda. Naturally, all the PYSs (Pretty Young Socialites!) were there with their beautiful Baguettes stowed under their arms.  Yes, like the French bread. Yes, hence the name. 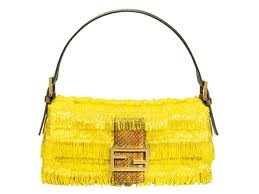 I remember when the Baguette became the first IT bag, back in 1997. Of course, I worked at Fairchild’s DNR then and couldn’t afford the real thing, so I purchased a pony skin tiger stripe I’m sure on Canal Street. Embarrassed that my bag wasn’t real, I nicknamed it the “O-Fendi,” fearful that I actually was offending various fashionistas with its knock off status (of course, I wouldn’t do that today — buy a designer bag on Canal,  I mean, what with the mayor knocking off that business down there and the pariah status one might endure by carrying a fake. I don’t think there even is a handbag business left down on Canal. Is there? Hmmm.). My O-Fendi played a major role in my writing life, though, inspiring the name of my first novel — The Knock Off — which I am debating serializing here on my blog. (Pssst. It’s a fashion murder mystery set in Milan….)
Click here to see last week’s fab party coverage (by B Productions for the House of Fendi with yours truly as producer) and the Baguette love that flowed all night.