Bathroom renovation practically complete. Presto, chango ~ really, just a lot of hard work on many people’s parts ~ and I am soon to have a fashionable, modern bath.

It’s sort of a joke (and sort of, like, well, not a joke…) that I’ve been living for nearly the past decade with a hole in my bathroom ceiling.

Long before I moved here, there’d been a leak. Then there’d been sort of a fix. Then the ceiling material itself sort of leaked. Kind of an old, crumbly cement, the ceiling just kept dusting down into the bathtub, creating a bigger and bigger hole over the years. Before long, it was exposing the underside to the tub of the apartment above us. 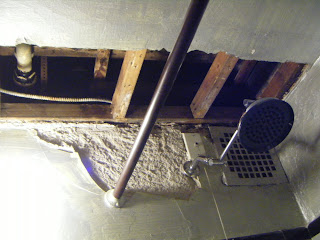 P cut down the crumbling bits and put up a piece of wood, which I covered with silver mylar contact paper. That worked for a long time. The, finally last year, he put up a sheet rock panel, below, and planned on making some electric changes. 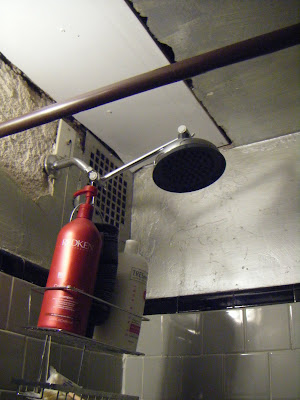 And now ~ here we are! At the almost-done phase of our bathroom reno! 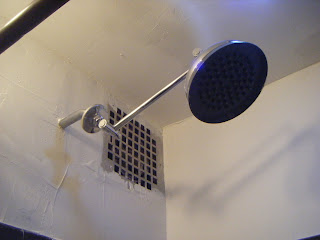 Ahhhh. A clean, closed ceiling. My life is almost complete now. This is basically the view now from under the shower head. There will be possibly a new shower head with a nozzle neck added later, for bathing Mignon.

Of course, there’s more mudding and sanding to be done, plus painting beyond the primer.  My plan was a Ralph Lauren Paint black hue, from either the Urban Loft or Thoroughbred Lifestyles collections, and all the electric face plates are glossy black. I may rethink the black ~ it’s kind of nice all white right now. But the last incarnation of the room was a silver RL Candlelit color that never made it to its second coat (my bad) and I think dramatic is better, even though it’s a small space. I know a lot of people don’t like the idea of a small space painted dark, but I had a black bathroom once before, a very tiny space, that we finished with Chinoise-inspired graphics in red nail lacquer (yes!) and it was a great little moody get-away room. 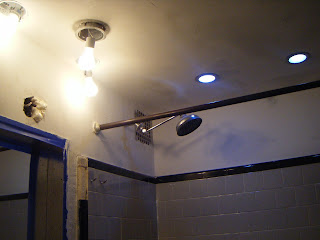 While the door of the Pegasus medicine cabinet is up, it isn’t in this picture, above (finished bathroom pix will be posted later). I absolutely love its oil-rubbed bronze frame and its INTERIOR mirrors and glass shelves are to die for! Unfortunately, the overall cabinet needs re-aligning in the wall and we’re just waiting for our man, Juca, to return this Saturday.

Sink vanity remains unpurchased and we need a new wall cabinet for towels, etc., which must be picked out and agreed upon. Thinking of something like this Amanda cabinet to replace our current metal “linen closet”  cupboard. 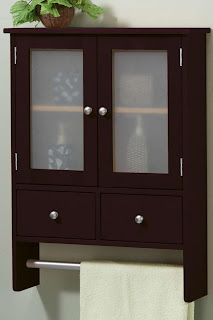 We may end up getting the Fairmont Tuxedo vanity, below, although our faucet fixture cannot be the gooseneck ~ no room to open the med cab then….

~ or something like the Fairmont Tribeca Vessel sink stand below. Perhaps this too “tra-modern” (traditional/modern)? 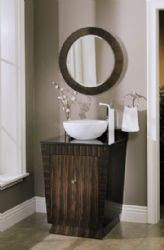 And after we’re all done with this? Well…we start the kitchen! Another birthday gift coming to fruition. Thank you, hubby P!