Change of Season, the wildly popular EV designer overstock boutique born of the creative genius of Marco and Clinton Querci, made it to the one year retail mark and celebrated its first birthday Saturday with some designer shopping, free book give-aways and a very downtown-style soirée.
Dandy-about-town Patrick McDonald, dressed in signature high style with his infamous arch eyebrows, Fedora hat and black and white ensemble punctuated by confetti Margiela footwear, signed “Four Famous Dandies,” the paper doll book by Jim Howard that features the former Launch my Line contestant and fashion consultant, along with the Duke of Windsor, Beau Brummel and Oscar Wilde. 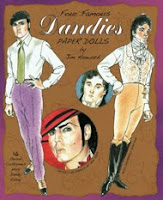 Artist Olek displayed her fashion-y, humorous crochet artwork, outfitting the window and busts throughout the shop, securing an outpost on the bench outside the boutique of “Couples Therapy,” models wearing a three-legged full body crochet suit of balloons, who startled more than a couple passersby when they breathed! 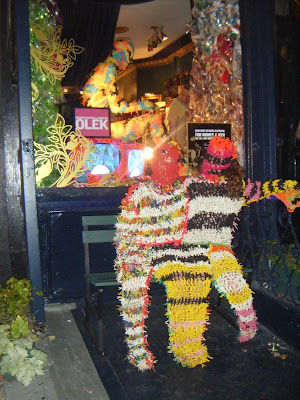 Portraitist and Lower East Side fixture Antony Zito, one of The 4Heads Collective and founders of the successful Governor’s Island Art Fair, dropped by early in the evening, taking a break from his curating duties to support McDonald and beam about recent press, including last week’s Huffington Post embrace of the fair.

New fashion works in the boutique ranged from the fabulous to the absolutely stunning. Of course, it goes without saying that there were great apparel pieces from Comme des Garcons, Rick Owens and Boudicca. But also new recycled jewelry finds from Maria Zureta (from designer Roberto Costa) and an Eastern European designer who hand ties satin ribbons and crystals for the most breath-taking necklaces.

Happy Birthday to YOU, dear COS!
xoxokimmie