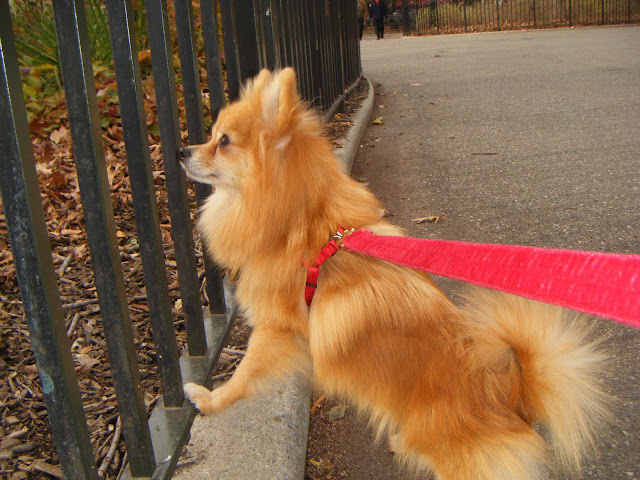 I first met this beautiful little pomegranate, oops! er, Pomeranian!, at a North Shore Animal League adoption event sponsored by designer extraordinaire/animal rights supporter John Bartlett, held in front of his 7th Avenue South West Village clothing boutique a couple of Saturdays ago. In my mind, it was just a drive-by for us, a quickie run-through-the-wagon-thang to say hi to JB and head home for a very much needed shower. (P and I had pitched in with the workmen that morning during a massive cleaning of my co-op’s cellar storage space, recently made even more filthy than its normal cellar dirtiness from a building-wide electric upgrade.) The deal had been struck between the two of us that I could run through and look at the doggies, but that P would not get out of the car.

On first pass, this Little One, “Penny” on her cage’s name card, coyly drew me in with those endlessly deep liquid eyes, then literally drew me in with her dexterous curling paws, begging me to scratch her behind her ears in between sweet, warm licky kisses. She had me at ~ yes ~ hello. Yet still I dangerously pushed my limit by giving in to the attendant’s request to hold her.

No doubt about it. I was hooked.

I ran out to the car and now I was begging, pleading with P to come in and meet her, breathlessly describing how her sweet little delicate face seemed a combination of Kuku’s, our former pocket Yorkie, and Lily’s, our lovable Maltese we’d lost nearly a year ago, whose death I thought I’d never get over enough to want another doglet in our lives. Obviously, I was wrong. The time had finally come.

JB came over and met the hubby, but P still wouldn’t get out of the car. Okay, I rationalized, we’d go home, shower and return to the adoption wagon. They’d be there at least until 4:30, according to one of the volunteers. If the doglet was still there when we got back, it would show that it was meant to be. If not, oh well. We’d only just begun to talk about adopting a shelter dog, anyway, and we hadn’t even begun to look at any at all. This was our first foray. And it was a big step.

Of course when we got home, there was no water in the building. I waited, secure in the belief that we’d be able to shower soon and head back over. When 4:30 came and went, I started to accept that maybe it wasn’t meant to be, and when it was 6 and there was still no water, I began to worry about how we’d get cleaned up for dinner plans we had. By the time our friends let us know they were running late and we finally had water to shower, the doggie adoption idea was fading as fast as the shower water was swirling down the bathtub drain.

I Facebooked John quickly before running out the door, thanking him for inviting us and apologized for not making it back. I inquired about the little pom and who she’d been adopted by and told John we were thinking about heading out to Long Island the next day to check out what other doggies the shelter might have. When I got home, John’s response made my heart jump; a woman had been in the process of adopting the Little One and had gone out to get her checkbook but never returned. Little One was still available for adoption! 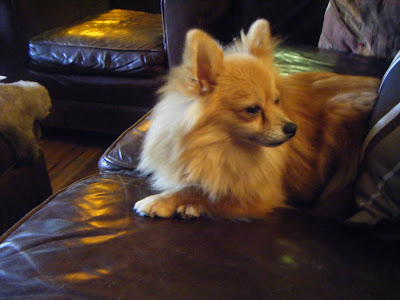 That next morning we got out to NSAL later than we’d planned, more like around 11 than the opening hour of 10. Inside the atrium, a young woman already was playing with “Penny,” her completed paperwork piled to one side. I watched as a worker came and took “Penny.” She was being adopted.

When the news was confirmed, I burst into tears behind my sunglasses and merely walked silently out to the car, crushed. P tried to console me and as we were about to drive out, I had a change of heart and decided we should make certain the adoption was going through. For an hour or more, we tried to track her down, bugging various volunteers, unable to find out exactly what was transpiring. The young woman adopting “Penny” was now playing with two other puppies. No one could tell us where “Penny” was. One worker said she was already adopted, and tried to steer us toward other Poms. I tried to explain that we weren’t looking for Poms in general, merely looking for one Pom in particular. Another worker said he found out that she was on hold but couldn’t figure out why or how, since the shelter doesn’t allow holding; it’s a first-come-first-serve basis facility. Then we were told she was on hold along with another Pom for a worker’s aunt whose Pom had died earlier that week.

We gave up; it was all too confusing and I sadly resigned myself to the fact that this Pom and we were not meant to be. I’d left my name and number with one of the more helpful and kindest of the volunteers, Steve, and we were driving out of the parking lot when Steve rang, hurrying me back inside. I was ushered into an interior administrative office where I finally, finally was able to hold the sweet Little One on my lap.

We found out what little information they knew about her. She was a puppy mill mommy from Missouri, a pretty little dog relegated to live, eat, drink, eliminate and whelp her little ones over and over in a wire cage much like a rabbit hutch kept up off the ground. She was 3 or 4 years old and that would have been her existence for the rest of her life, until she died in puppy birth or could no longer have pups and was deemed redundant and let loose as a stray or hit on the back of the head with a rock. Her tummy and teats were swollen from perpetually pumping out puppies that were then taken from her, shipped out probably not even yet weaned and sold in pet stores around the country. She was from one of five states that allow the more notorious mills, “commercial breeders,” which basically ignore the Animal Welfare Act. 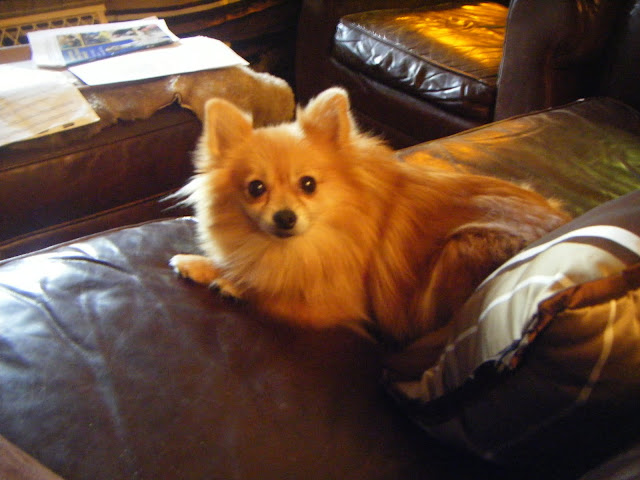 The rest is history. She’s not housebroken, but almost. And she has just found her voice, another difficult training path we are on. But we are making it work, the key being incredible diligence and consistency. And watchfulness. It’s hard work. Especially with my other hand having just been operated upon this past week. But, again. We are. Making it. Work…