They’re known as an “arm party™,” a name now trademarked by Leandre Medine, blogger extraordinaire of The Man Repeller.
And, yes, I think I’ve been wearing my cuffs like this for years, i.e., in multiples, stacked, moremoreMORE being the operative mode. My style has included wood, wood and brass, bone, silver, turquoise, leather, plastic, fabric, chains. All together now. 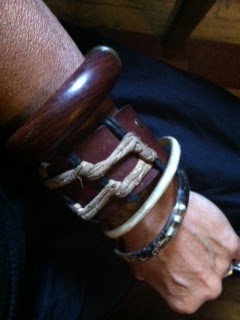 Yes, the more the merrier, but the trend kicked in especially this past year, ever since Christmas when I found several provocatively engraved ID bracelets in South Carolina at a couple of thrifty stores. The ID “arm party,” as it were. Dare we say another trend is born?
I love the I.D. — idea, get it?! — of wearing other people’s names on my wrists. I make up stories of who each one was, the context and relationship of the person from whom they received the bracelet, what they were wearing when they opened the box containing the bracelet.
Natsuko’s bracelet, 5th one down, is from Albert, dated 12-25-44, and is engraved in a lovely, girly script. I think they met in the war, he brought her back to the states and made her his bride, then gifted her this remembrance that Christmas so many decades ago. 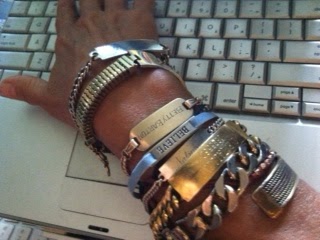 The chunky gold link ID of C.R. Tallent is from an MLT (perhaps a Tallent wife? a husband? the brother? sister? mother? maybe father, since it’s so masculine, a man-acle, if you will.), also dated Christmas (ID bracelets always were and continue to be a great commemorative Christmas prezzie), this one ’66.  It has his or her name on front — C.R., who are ya man? — with a number. Social security? POW? MIA?  What? Any ideas, readers? 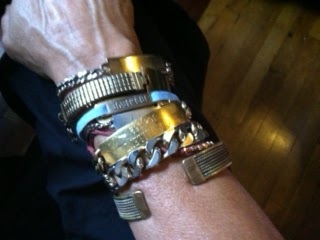 The other ID’s get even more mysterious. Betty Barton’s has no date, but has the most fabulous double safety catch clasp (in my mind, she’s a long-lost member of the Austin, TX family that owns the Barton Springs. I don’t think a family even owns the springs there, but it sounds like a good yarn to me.). Two of them have nothing inscribed on them. And one is just the chunky link chain bracelet that I think used to be my mother’s. Or so I imagine, having forgotten a long time ago.
The little blue one that’s inscribed “Believe” is brand new as of today, with a Catholic saint dangling from the back and was just given to me from my friend, Father Mesa as we went for coffee. I immediately added it to the party.
Because — I do believe!