I’m pre-packing for next week’s trip to warmer climes and it’s sending me into an absolute tail spin. Why? There’s the two-day trip to Florida for fun. But, 80 degree weather? What’s that?! Where are my summer clothes, not to mention my pedicured feet and tan legs? They’re all elsewhere, slowly thawing out (I hope) from our most recent Polar Vortex. Packing for that trip alone would be a hot summer’s breeze but after Florida’s tropical temps, I drive up to Charleston to cover that city’s Fashion Week and straight into a little less warmer weather. So I need vacation frocks mixed with work attire topped with a little bit of warm outerwear. Steam out my straight jacket, puh-leeeze.

Imagine packing for wildly different climates and settings for multiple weeks, traversing harrowing adventure-strewn, even civil war torn, countries. Cue my friend Jeannie Ralston, who knows a thing or two about packing, especially for extreme travel. You may remember my friend Jeannie, the author of The Unlikely Lavender Queen: A Memoir of Unexpected Blossoming, available at Barnes&Noble. As the undisputed home-schooling travel queen who’s packed up her husband and two sons from Austin to parts of Africa (hot and rugged) on to Paris (cold and sophisticated) and lived to tell quite the sartorial tale (she’s currently out with a new e-book called The Mother of All Fieldtrips: Homeschooling two kids in 14 countries – buy it for only $2.99 at shebooks.net/fieldtrips), Jeannie is sweetly doling out some advice on strategic travel packing here.

Fashion Whirled:  How did you make that segue from Africa to Paris? What type of clothing took you from hot and rugged to cold and sophisticated?

Jeannie Ralston: The key piece of clothing for the trip where we spent three weeks in Africa and then a month in France was a sporty black skirt from Athleta. It had a great design and was made from nylon and Lycra (though it felt like brushed cotton to me). I wore it in Africa with sandals and cute short sleeve tops; in Paris I wore it with tights and boots and then layered long sleeve tops with it. Because it was nylon and Lycra I could wash it in hotel sinks and it dried quickly. It was the most important item on that crazy trip. Also, I try to pack shoes that can work in many different ways (especially since shoes are so bulky). I have a pair of black Merrell sandals that has pretty strapping on top and a cushy sole. I am able to wear those for dress up and for just kicking around during the day. They are way sexier than Teva’s or Keen’s (which I also love). For the colder weather, I have one pair of black boots that are low-heeled and comfortable. I can wear them with skirts or jeans. So basically one pair of shoes for warmer weather; one for colder. That really helps my packing.

FW: What’s the most essential piece to pack for trips like the ones you’ve taken with your family?

JR: I’m a huge fan of white T-shirts—long sleeved and short sleeve—and white tank tops, too. They are key to layering and adjusting to any climate. On another trip, after leaving Egypt— where it was really hot—we flew to Athens, where it was snowing. I think I wore both of my white long-sleeve T-shirts for layering while we were in Greece. I also like to pack good-looking yoga pants because you can wear those out at night if you pair them with the right top and accessories, but you always have them for hiking or working out or just laying around the hotel room.

FW: Have you ever forgotten an important clothing element? What was it and how did you replace or cope without it?

JR: I’m very picky about the kind of purse I take on our trips. I want something that’s not too big, not too small and I absolutely MUST be able to wear it across my chest like a messenger bag. I want my hands to be free while I’m walking around a city. So before we went to China, I found what seemed to be the perfect bag—nice size, nice design. I thought it looked well made, or maybe I was just influenced by the price (it wasn’t cheap so I figured it had to be sturdy). After a couple days in Beijing—where I trekked around with the purse stuffed with maps, hand-cleansers, camera, etc.—I noticed that the stitching on a crucial seam on the strap was coming undone. It looked like it would break at any moment. I was so mad. But luckily I was in China—where a lot of these things are made anyhow—so I made my way to a place that sold an assortment of bags. I found a great one in red and black that fit everything I needed. And it was only $15. It lasted through the whole six week trip and I still use it now if I’m going on a trip. Good value.

FW: What’s your biggest “fashion” item that you can’t live without on trips like these?

JR: I cannot live without scarves when I travel. They are easy to pack and they can instantly dress up any outfit (especially a white T-shirt). Plus, they help if it’s chilly. In my dreams, I would find a way to just pack scarves and then tie them together to make dresses and skirts and blouses. Everything but jeans. Because of course you can’t do without jeans.

FW: What’s the number one thing to remember when packing for any trip?

JR: Everyone says it: Layer, layer, layer. But I really am crazy strict about this and it really serves me well. Just a month ago, I went to Aspen and of course, packing for a ski trip is really hard. However, I was able to get everything I needed into a carry-on bag. The secret was that I have a very nice North Face down jacket that could be really squished small but is still incredibly warm. I wore a Patagonia shell on the plane so those were the two key outerwear pieces for skiing. Other than that I just had long underwear and one heavy sweater (for apres ski) and lots of layers. Oh and jeans. Because of course you can’t do without jeans. Did I already say that? On the way to Aspen there were lots of flight delays and cancellations because of a winter storm. Almost everyone else in my party got separated from their bags (one friend didn’t get her bag for two days); but I had everything right with me in my carry on. It was beautiful.

JR: My go-to everyday jeans are Gap—nothing fancy. But I’ve just gotten a pair of the most amazing jeans from an Austin company called Traveller Denim. They’re custom fit to me and handmade out of vintage denim. Sure to be my new go-to pair.

JR:  When we hiked the Inca Trail, there was a limit to how much you could bring along. Our bags were carried by porters and of course you don’t want them to be too heavy. It was a four-day hike and I was worried that I wouldn’t have everything I needed. I took along two pairs of those pants that you can zip off into shorts and two T-shirts, one tank top, one long-sleeved shirt, a light fleece top, a rain jacket, a sun hat and hiking shoes. And two scarves! My bag came in under the maximum weight, which was a relief, plus I didn’t look too, too bad along the way. (See photo.) But no jeans this time; jeans are pretty heavy. 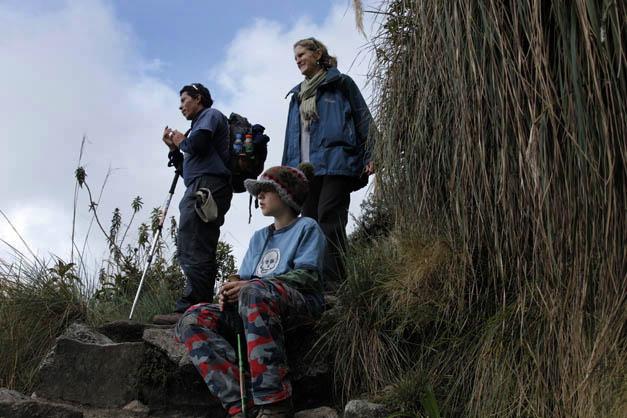 Jeannie and the boys on the Inca Trail

JR: Here I am in Kunming, China with the boys after a 24-hour train ride—which explains the tiny, puffy eyes. You can see my favorite black skirt with my cute Merrell sandals. And then there’s my must-have scarf and the red and black bag I bought in China to replace my expensive U.S. one that fell apart.

JR: In Tokyo in a black cotton sundress that I could dress up or down. Note the scarf and the umbrella; Japanese women don’t go anywhere without an umbrella to block out the sun and we know how beautiful their skin is. 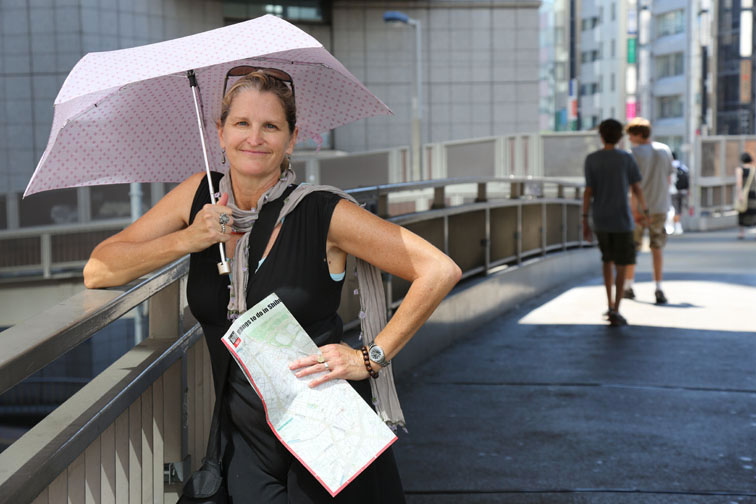 Travel photos snapped by her photographer hubby, Robb Kendrick. Blurb from her new book, below:

“After her two sons came along, journalist Jeannie Ralston packed away her passport and her traveling bug. But when the boys turned nine and 11, she and her husband found a way to fold them into adventures—by turning the world into their classroom. Over three years the family learned together and played together in 14 countries, from the Ecuadorian rainforest to the plains of the Serengeti and the foothills of the Himalayas. They explored icons such as Machu Picchu, the Great Pyramids, the Great Wall of China, and found themselves in the middle of the Arab Spring and on one of the world’s deadliest roads. With humor and honesty, Jeannie recounts the adventures of a lifetime—made all the more harrowing and fulfilling with her sons along—and the struggles to balance motherhood with her own dreams and desires.”