I was very saddened to learn of the passing of former Men’s Fashion Association leader Chip Tolbert, who left our mortal coil yesterday.

I will always fondly remember Chip as being similar to camp counselor at our many Rye, NY fashion industry trade outings, an industry cheerleader for the brands the MFA devoted itself to and an easy-going, happy-go-lucky guy who was quick with a quip, supportive with a smile and fun with a toast. 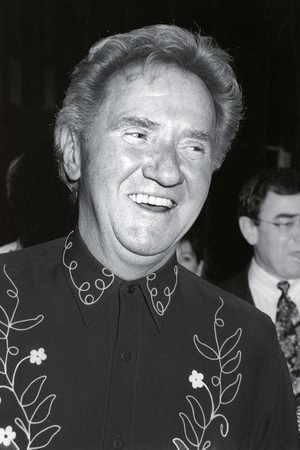 Friend and colleague Tom Julian, who worked with Chip before taking his spot at the MFA, thinks that the picture with WWD’s obituary, above, was from “the Aldo Awards in LA…JCP “Western Night” at the Biltmore…with the cast of Knot’s Landing…”

Chip, always styled for the occasion.

Chip Tolbert, the longtime fashion director of the Men’s Fashion Association, died Thursday afternoon at an assisted living facility in Cortlandt Manor, N.Y., from respiratory distress. He was 86. Services had not been set by press time.

After receiving a journalism degree from the University of Alabama, Tolbert’s first job — a copywriter assigned to hosiery, lingerie and suit accounts — led him to stints at fashion retailing in Chicago, San Francisco and New York, then to Esquire magazine, where he spent 17 years, from 1954 to 1971, working his way up to fashion director.

After leaving Esquire, he went to Rome to advise designers there on the U.S. market before, in 1973 joining the MFA, where he was a fixture at conventions, on radio and TV as the fashion authority for the men’s wear industry’s publicity organization.

Tolbert retired from the MFA in 1992. He relocated to West Palm Beach, Fla., where he worked part-time as a design assistant for Jennifer Garrigues Interior Design. He moved back to New York eight years ago when his wife was in failing health and lived in Cortlandt Manor. For the past year, he had been living at an assisted living facility there, according to his son, Andrew.

Topsy, as he was known to many of his friends, had a reputation as a natty dresser and was listed on the Eleanor Lambert International Best Dressed list in Vanity Fair. Tall and blonde with a ruddy complexion, Tolbert made it a personal quest to introduce fashion to a nation of navy-blue-blazer-wearing button-down men. He was often seen out and about in emerald blazers and cherry dinner jackets.

He served as chairman of the Coty men’s wear awards and the Cutty Sark men’s fashion awards for eight years, and was on the selection committee for the Uomo Moda awards and received a Woolmark Career Achievement award.

“Chip Tolbert represented the best of the men’s wear industry during such pivotal decades of change — the Seventies through the Nineties,” said Tom Julian, who succeeded Tolbert as fashion director of MFA. “He was known for his TV persona, his quotability in the media, his international reach with men’s wear leaders from Nino Cerruti to John Weitz to Pierre Cardin. But more importantly, he helped evolve what was a manufactured clothing industry into an American designer world.”

Tolbert is survived by his son, his daughter-in-law Joy and two grandchildren. His wife, Franca, died in 2011.

You have been and will be eternally missed, Chip.