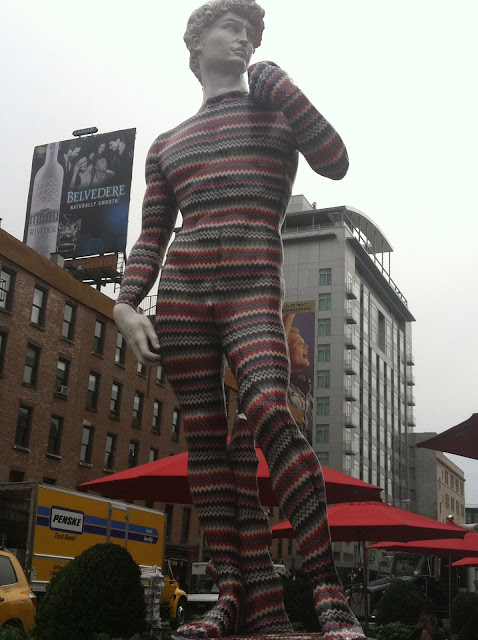 FashionWhirled:  Would you be so kind as to tell FashionWhirled’s readers what role fashion, or style, plays in your life?

dEmo’s David a la Missoni:  Con piacere!  Fashion never, ever, played any role in my life. Until now, I have been naked my whole 511 years!

Sometimes I get to admire a stand-out sense of style that I might see pass me by as I stand in the Galleria dell’Accademia, but unfortunately, I see a lot of bad tourist style. How you call it? T-shirts, Tevas, tube socks. Eccola! My twin in the Palazzo della Signoria gets quite another view, the beautiful Italian women and girls that parade by him every day, with their amazing, inimitable style. E’ un peccato!


FW:  Who is your favorite fashion designer?
D’s D:   Questo dipende. Currently, I would have to say Missoni, though that might be just because I am a little predisposed to their designs right now. I hear horizontal stripes make you look bigger, wider, but my body has been out of proportion for hundreds of year, so I think this helps give me an edge. The signature Missoni chevron flame stripe adds a bit of flair and flash to me, too, no? I have been wearing this since the collaboration between Spanish artist dEmo and Luca Missoni. Originally, I was installed in front of the Missoni boutique in Madrid in 2010 for Fashion’s Night Out, making an appearance in Barcelona for FNO there and now for NYC’s FNO. I think I prefer the Meatpacking District the best!

FW: Who is your muse or inspiration for your quiet demeanor?

D’s D:  You may laugh at this, but for centuries it was the Mona Lisa. But now the world is opening up to me. I have seen a lot of beautiful models pass by me from my perch here at 14th and 9th Avenue. [Sigh.] It’s quite a stylish corner of the world.

FW:  If you could have any notable individual — dead or alive — stop be to see you in your new attire in the Meatpacking district, who would it be and why?

D’s D: Ovviamente, it would be Michelangelo. He created me, me — one the world’s finest pieces of design, most stylish pieces of Italian art to date. I would like him to see me modernized, fashioned, legitimized for this time, this era of fashion pop culture. It might kill him, si, but he is dead already. Non importa!

FW:  What fashion legacy do you hope to leave to the future?

D’s D: Hmmm. This is difficult. But, Io suppongo di it would be that even a nude statue can look better with a little bit of fashion in its life. Mille grazie, Missoni. Mille grazie, FashionWhirled. Ciao, bella!