I fell in love the last time I visited Austin. Yep, right there under P’s distracted eye – he was mostly at the Grand Prix racetrack that weekend, anyway. Sure, I brought back some mementos of that love, although they seem to make me that much more aware of the miles between me and my new addiction.  I’ve got one more fix, a delivery coming, hopefully, today. I’m counting down the hours. But I’m jonesing for the coolness I found there and not sure when I’ll get to embrace it again. 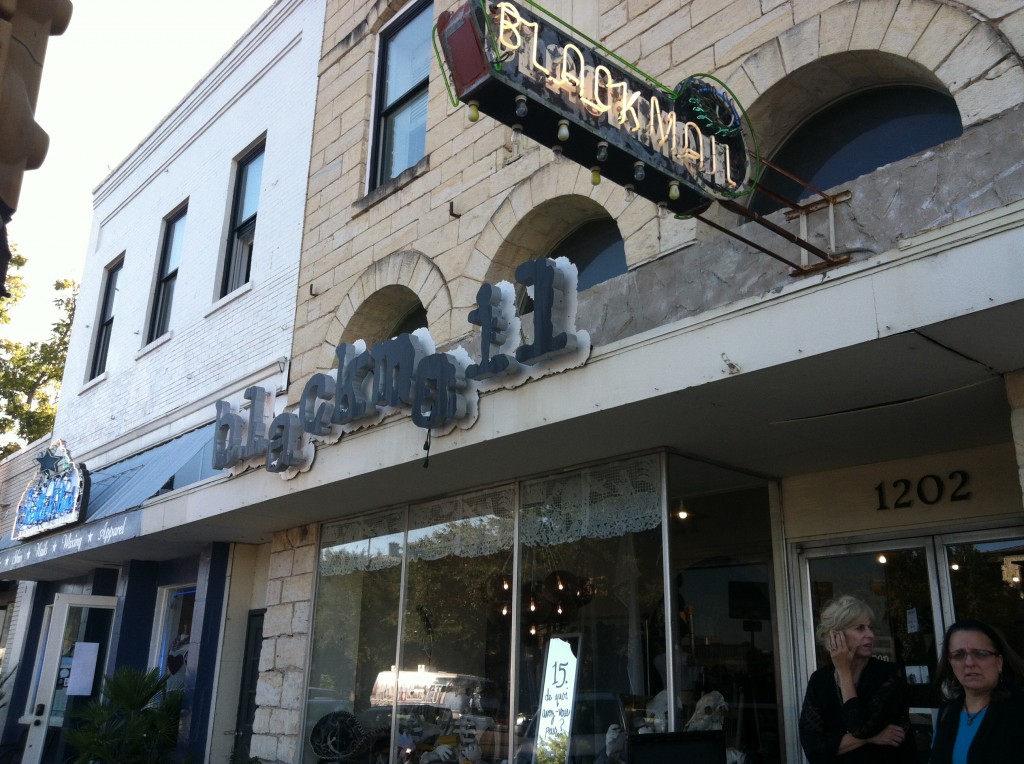 You might say I’ve been “Blackmailed,” enthralled and intoxicated by the exotic fashion world of Blackmail Atelier, whose owner/designer Gail Chovan I met recently through my dear friend Jeannie (you may remember her as The Unlikely Lavender Queen). Gail is a funny, multi-talented, strikingly beautiful blonde with a style penchant for, naturellement, the noir. Occupying a little spot of heaven on South Congress Street, her Blackmail Atelier boutique is based in an old 1889 mercantile storefront, the oldest building on SoCo. It may actually embody the ultimate crossroads of where Coolness meets Couture. 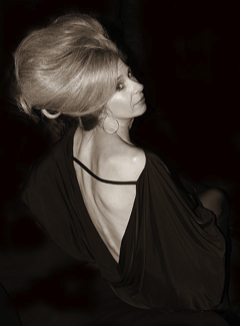 Here’s the thumbnail bio of the rebellious former tomboy: originally from New Jersey, schooled in Paris, gave up a career in academia, switching out French literature at the Sorbonne to clothing design at Esmod. Worked with independent fashion designers in Paris. Eventually launched her own clothing line.

Chovan started Blackmail in 1997, first buying and selling only black fashion pieces to her eclectic Austin clientele. She soon became synonymous with avant garde style and award-winning window displays. She now houses only her own artisanal designs in the boutique, rounded out with a few select pieces from local accessories artists, participates in Gen Art Austin, has been awarded Best Fashion Designer in Austin and also is an educator – mentor for the University of Texas Department of Textiles and Apparel for the past decade, and recently teacher of Fashion and Design at the Sorbonne in Paris.

the hands of the artisan, photo by Todd V. Wolfson

Each of her couture-like creations are produced on-site in the atelier, and are either limited edition pieces or one-of-a-kind works. The origami skirt being delivered today is such a piece; it was a dress when I tried it on that I was only able to make fit as a skirt. Gail has been re-zuzshing it a bit, making the straps into suspenders that I can wear up or down at the waist as a wrapped belt. I cannot wait to see the final iteration! 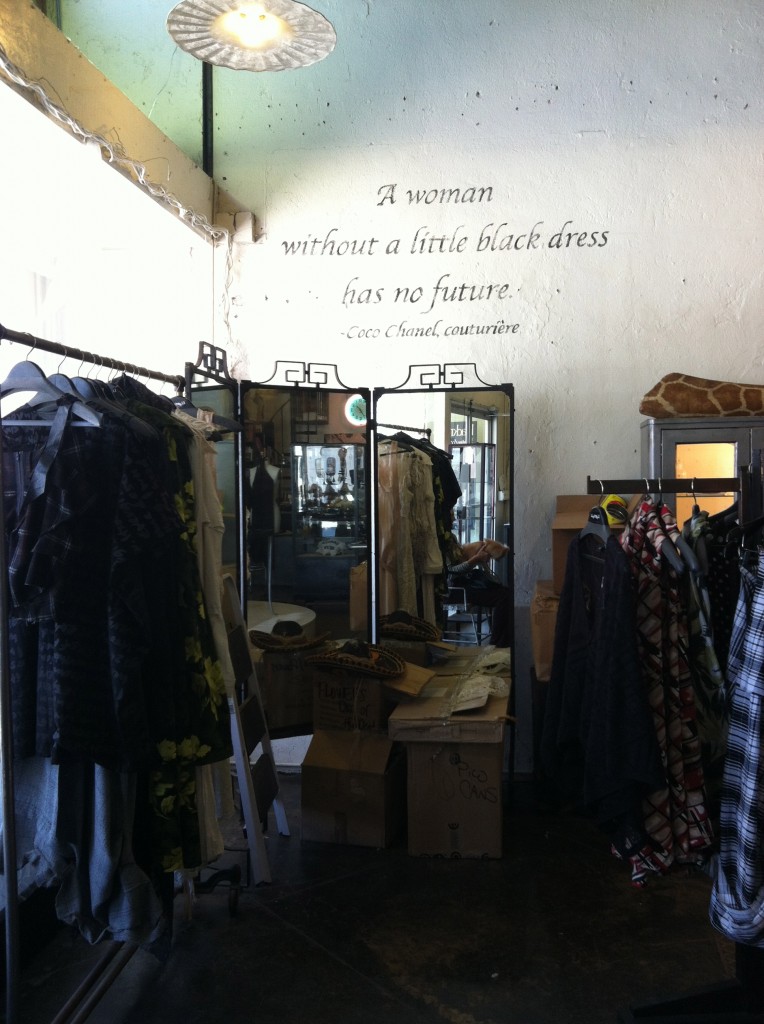 She and her husband, artist Evan Voyles, and their twin children, Creed & Zelda, corner the cosmos of Austin coolness. And her store is truly a must-see go-to destination stop if you’re in Austin, even for just an hour! Thank God we were able to convince this awesome artist to partake in our Friday:5ive this week. You can also read more about her and her collections on her blogs.

FashionWhirled:  As designer of your own line and owner of the unique boutique Blackmail Atelier in Austin, exactly what role does fashion or style play in your everyday personal life? How is that reflected in your teaching in Paris at the Sorbonne? 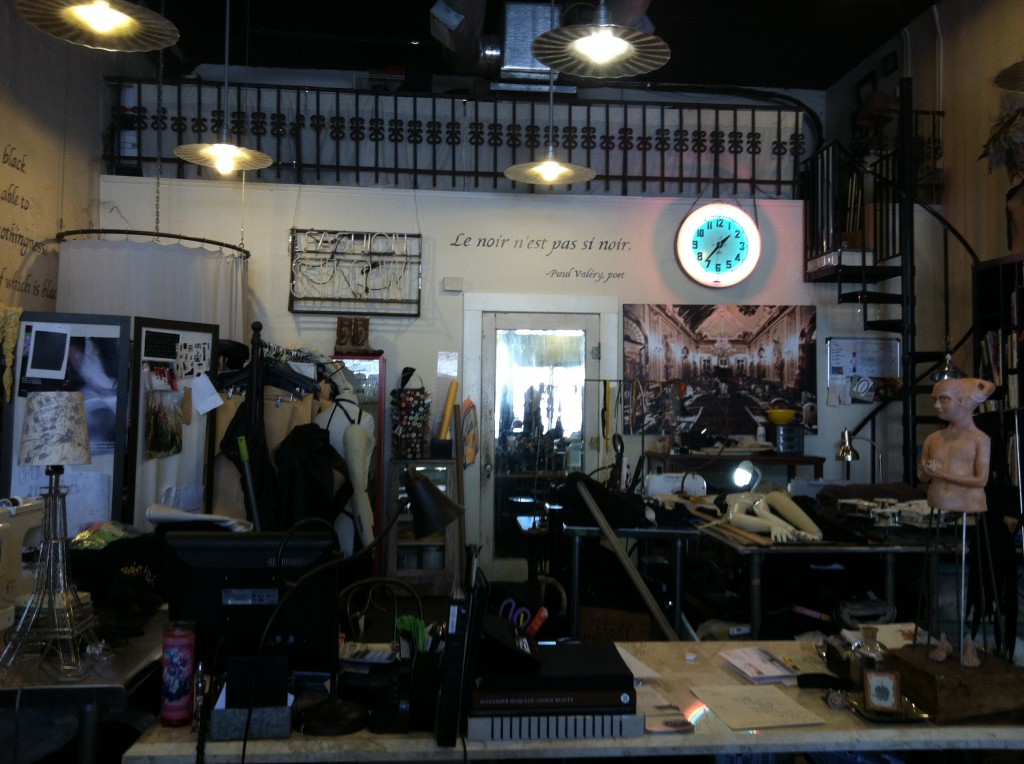 Gail Chovan: I find inspiration everywhere and, therefore, I process things and/or encounters in my life in relation to design.  I constantly look at balance, texture, weight, relevance…. I especially find beauty in imperfection. It’s not so much about fashion – as I try to conscientiously avoid trends and stay away from magazines – as it is about design, style, feeling and how things are put together. 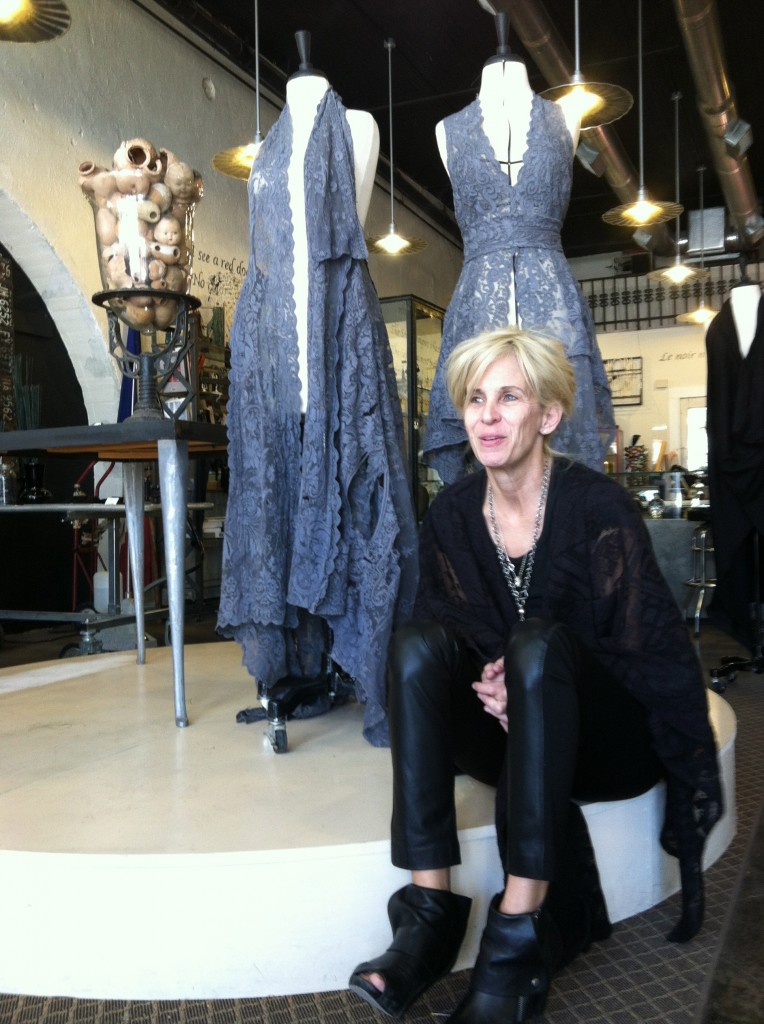 Gail chatting with me and my friends, in front of salvaged lace dresses 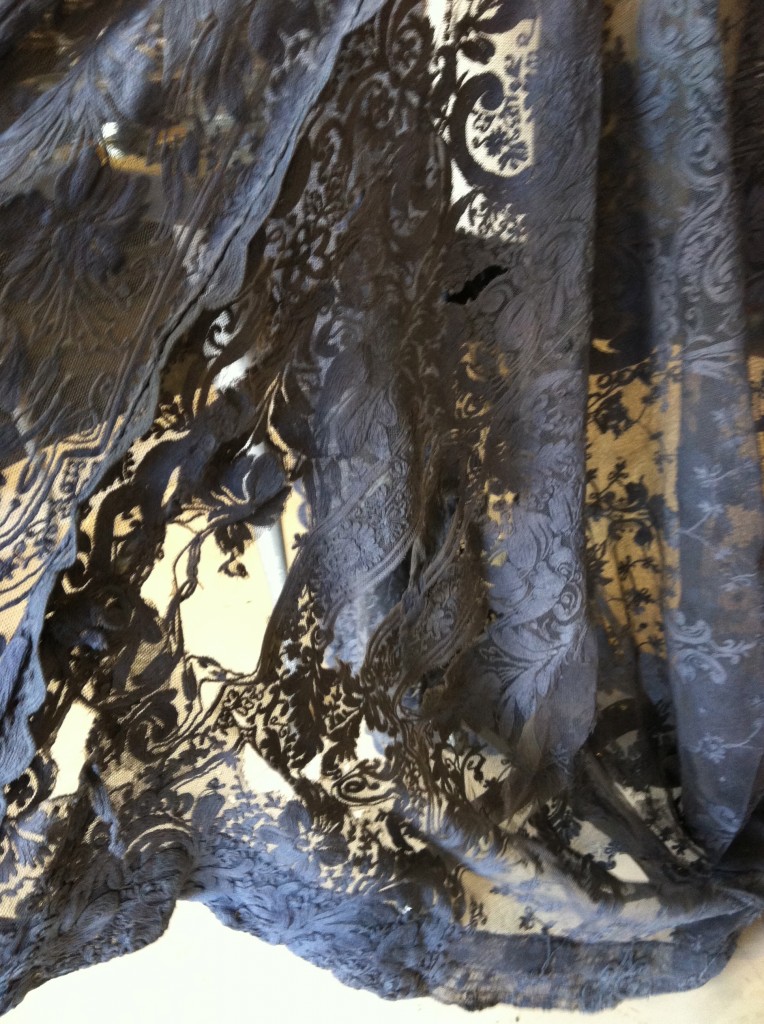 close up of the Miss Haversham-style salvaged lace

When I teach during my summers in Paris, I like to start with the basics: opening one’s eyes to observe without judgement. Sure, we all have our likes and dislikes but so often it clouds our view of what we are truly seeing. I enjoy challenging students in the early days of class to observe with all of their senses what is around them. One of their assignments is called “Qu’est-ce qu’on a vu dans la rue?” – what did we see in the street? They bring to class a description of a vignette: an image, a smell, a sound that they experienced as they traveled throughout their day. Their observations are pretty amazing: a combination of colors on a scarf worn by an old woman, the smells emanating from the bakery, the soft sounds from the headphones of the guy sitting next to them on the métro…it all relates to design. 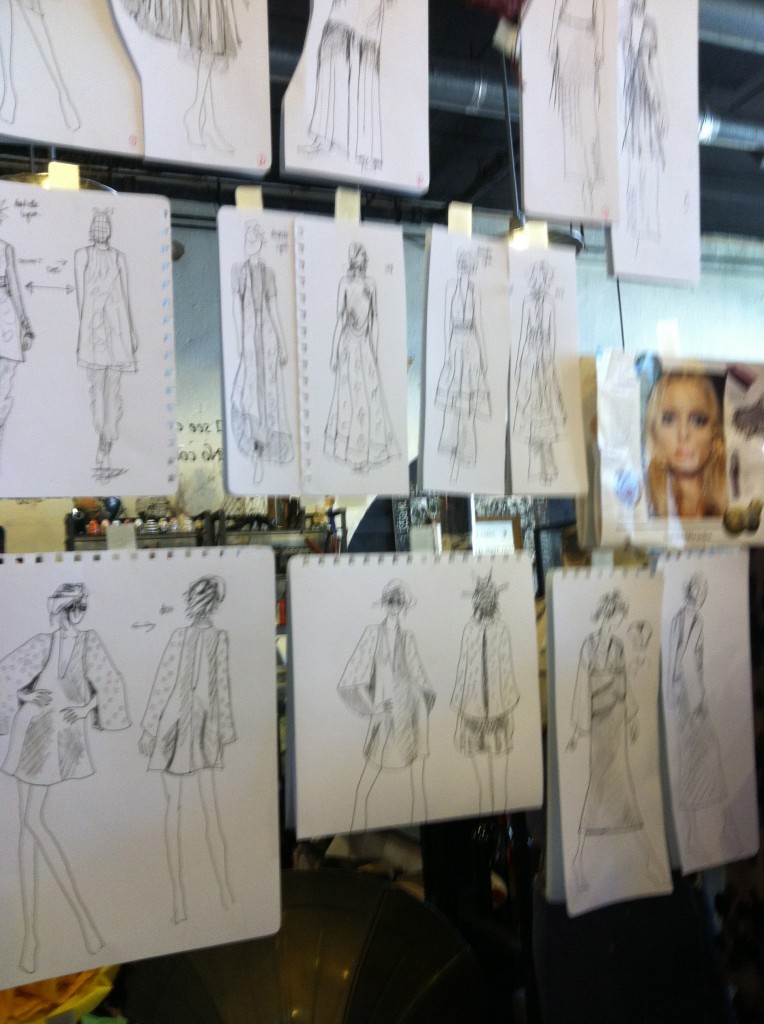 FashionWhirled:  What was your “aha!” moment that led you into the fashion world? What is your creative process for designing? What’s been your favorite piece of clothing EVER?! 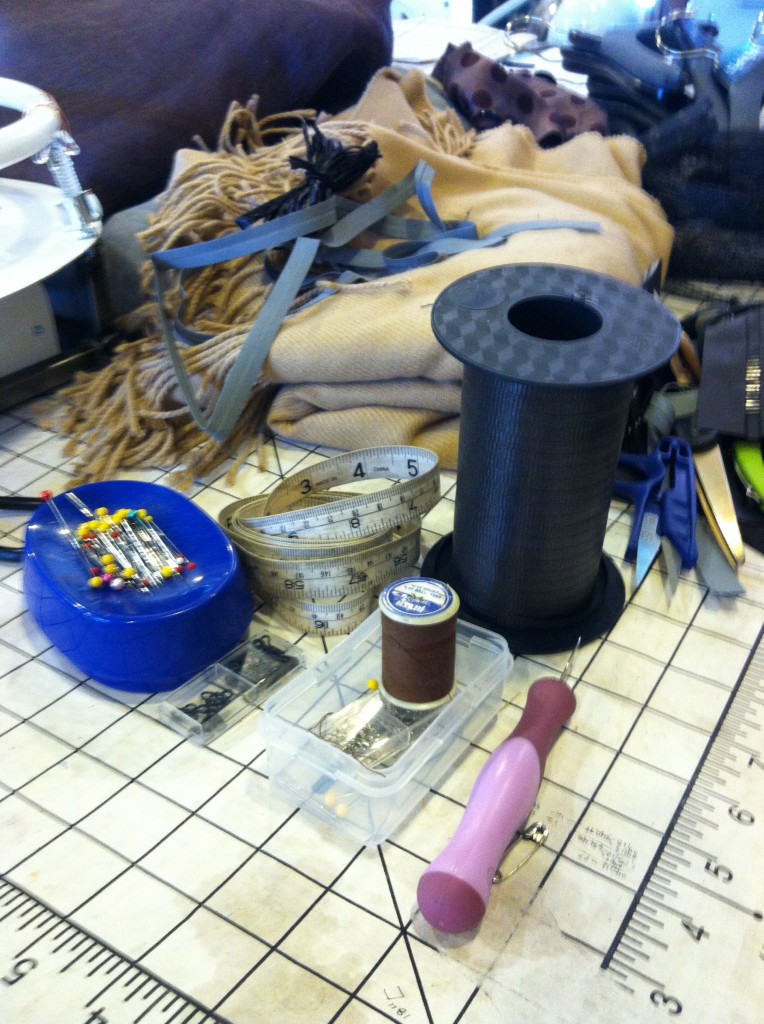 Gail Chovan: I was not one of those girls who dressed her Barbie dolls in ball gowns and dreamt of being a princess. I was a tomboy who played in the dirt. I was a teacher first, an academic, a builder, an artist who one day said “Oh, I can figure out how to sew.” For me, it was more of a need, like repairing a car…something needed fixing in my life. So I went to design school in my late 20’s in Paris. Now, with all of these years of learning and experimenting, each collection seems to be that “Aha” moment when I am feeling closer to who I want to be than ever before. 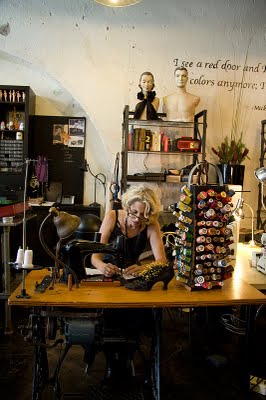 at work, photo by Amanda Elmore

As for a favorite piece of clothing…definitely not one that I have made. I have pieces that I am proud of that move on to new homes and that I hope will develop soul and history for their owners. But my personal things in my wardrobe are those that I have found: I bought an old dressmaker’s smock in the flea market this summer for 10€ and I love it.

FW:  Who is your muse? Why and how does she/he/they inspire you?

GC:  I guess my muse is my life – that gives it lots of responsibility! Somewhere along the line, I realized one didn’t need to settle and be “ordinary.” Leading an extraordinary or artful life is a choice – to experience, to travel, and to share, are all things that influence me in my work. In raising our children, Evan – my husband – and I constantly strive to give them experiences ranging from sleeping in a trailer in the desert to living in a 19th century apartment in Paris. We have 7 year old twins and our daughter is blind. This holiday season, they will go skiing for the first time. When we took them to the beach as toddlers, my daughter sat in the ocean and I explained to her about the tides and the waves. She excitedly stood up from touching the water and started waving out to sea. That gesture right there, of a double meaning, was inspiration for my designs. It was organic, unexpected and was so “true.” 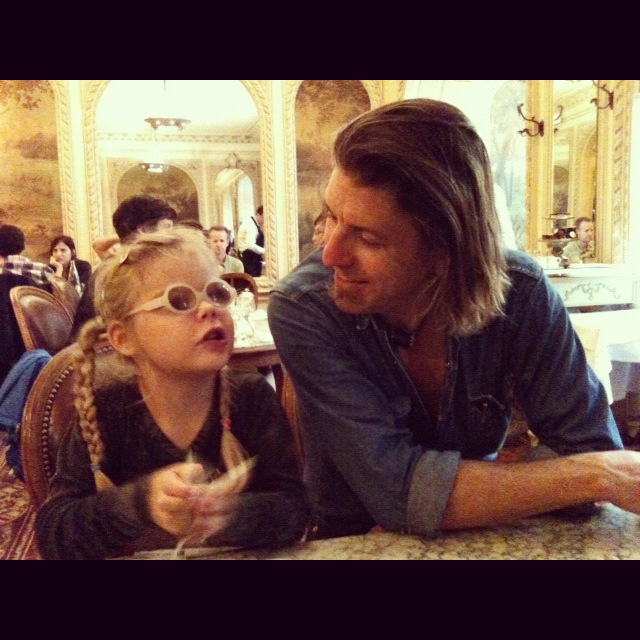 FW:  If you could have any notable individual — dead or alive — collaborate with you on design, fashion or otherwise, who would that be and why? What other paths than design and retail do you walk? 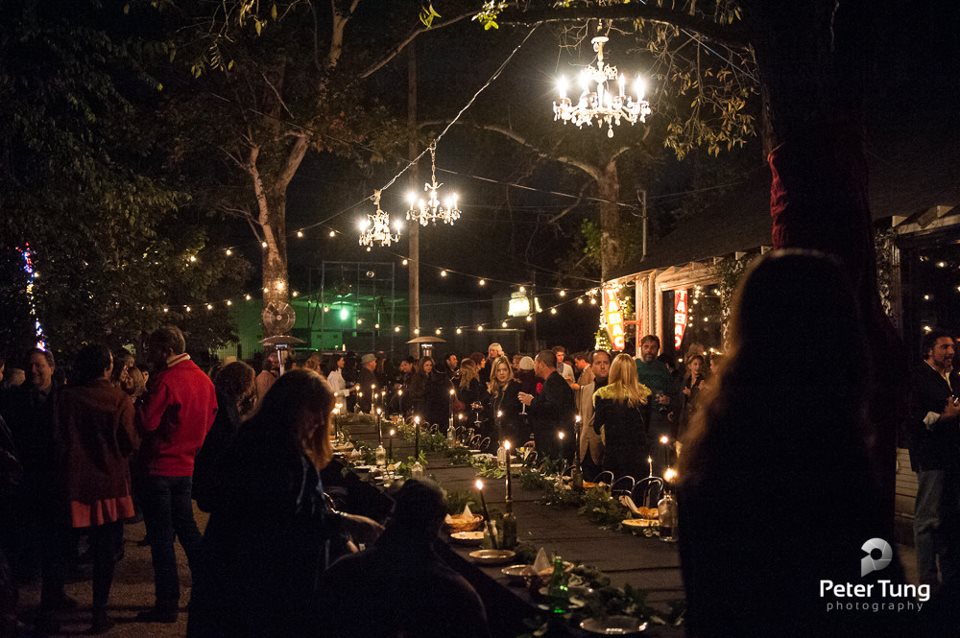 GC: There is a film by Wim Wenders called “Notebook on Cities and Clothes” – it’s a dialogue with Yohji Yamamoto about life, design, Paris, Tokyo… Anyway, there is this scene where he has his patterns and muslin laid out in front of him on the floor of his atelier and his assistants are around him – all silent, all watching, all learning. I would want to be one of those assistants. 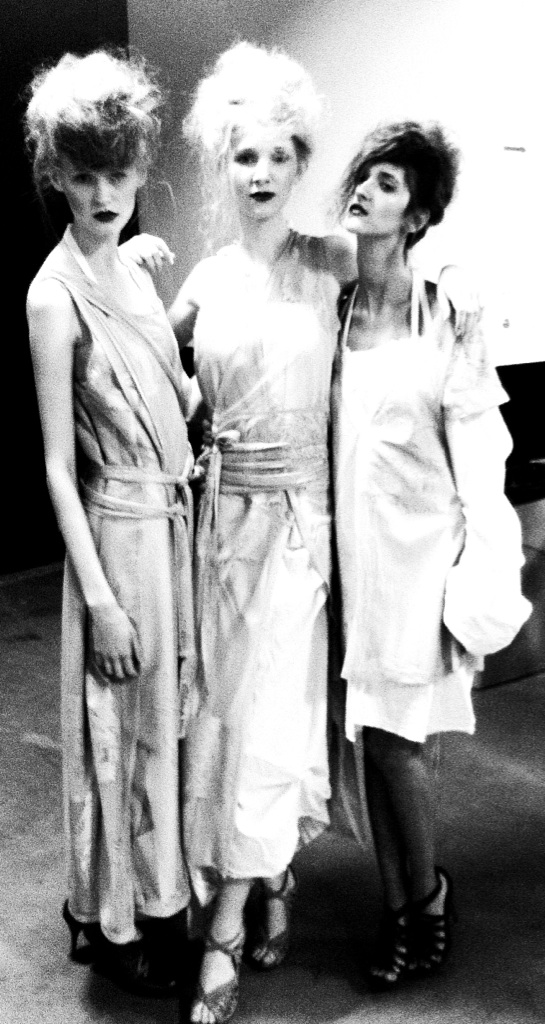 Both my husband and I feel the importance of contributing to our community, especially by giving back through beauty and art. Despite my intense growing desire to be a hermit – people find me, especially young people and I become a mentor of sorts.
But most of all I am a mother to my really cool twins. Evan and I say they are the best art project that we have ever created. I have been working on a book for the past year and half called “La Petite Zelda goes to Paris.” It’s the story of a blind girl who goes to the city and experiences it through all of her other sense thanks to her twin brother, Creed. I plan to have the book printed in English, French and Braille. 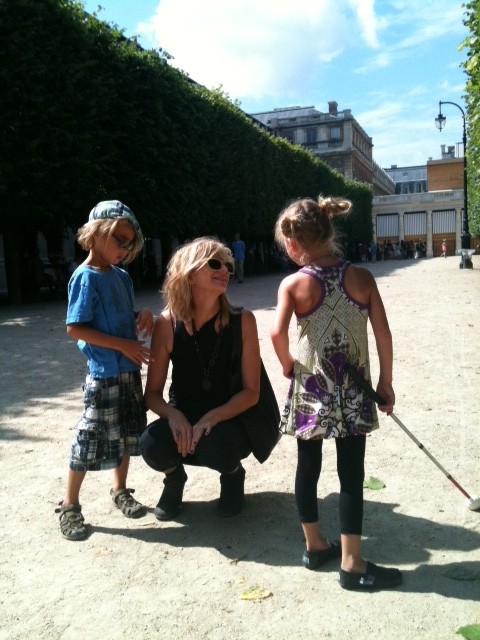 Gail with the kids after the couture shows, photo courtesy Gail Chovan

FW:  What words of wisdom or inspiration, or daily affirmation do you live by, or at least strive to live by? And what legacy, fashion or otherwise, do you hope to leave to the future, your children, your students and why?

GC:  Continue to learn and be productive. And nothing is so precious – not fashion, not clothing, not art – nothing is more precious than relationships with ones that you love and that nourish you in return. And last but not least, ask yourself “So, what are you afraid of?” – then, dive in head first.