fashion = style, mode, vogue, fad, rage, craze. according to m-w.com, and as used here, it is the usage accepted by those who want to be up-to-date. my quoted examples are a riff on the dictionary’s own.

fashion is the most general term and applies to any way of dressing, behaving, writing, or performing that is favored at any one time or place ~ “the current fashion of dressing depends on who you are or who you want to be perceived as ~ it’s all about image.”

style often implies a distinctive fashion adopted by people of taste ~ “Conrad Black is one media baron used to traveling in style who no longer will be.”

mode suggests the fashion of the moment among those anxious to appear elegant and sophisticated ~ “slim bodies are the mode on most runways, even though designers claim to be meeting the bmi numbers.”

vogue (and Vogue) stresses the wide acceptance of a fashion ~ short skirts are back in vogue. “Christian Louboutin shoes are everywhere in Vogue.”

fad suggests caprice in taking up or in dropping a fashion ~ “last season’s short shorts are this season’s leggings.”

rage and craze stress intense enthusiasm in adopting a fad ~ “Ugg boots have been the rage for several seasons, strangely enough, even during the summertime.” as well as, “Uggs once seemed just a passing craze but, strangely enough, have lasted.” etc….

rage can also be used to describe certain behavior at sample sales~ “With five young lovelies gripping onto the last pair of $15 Daryl K’s, a fashion rage ensued as things immediately turned ugly.” 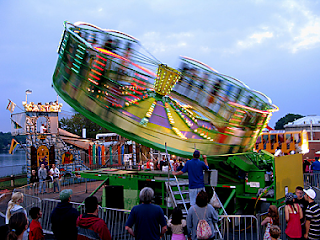 1: to move in a circle or similar curve especially with force or speed ~ “the cycle of the fashion whirled.”
2 a: to turn on or around an axis like a wheel : rotate b: to turn abruptly around or aside : wheel ~ “the supermodel whirled around in surprise as Naomi tried to trip her on the runway.”
3: to pass, move, or go quickly ~ “the fashion intern whirled down the hallway amid all the Louboutins lining the walls of the fashion closet.”
4: to become giddy or dizzy : reel ~ “my head is whirling from the base beat and strobes at this fashion show.”
transitive verb
1: to drive, impel, or convey with or as if with a rotary motion.
2 a: to cause to turn usually rapidly on or around an axis : rotate b: to cause to turn abruptly around or aside ~ “the cycle of the fashion whirled.”