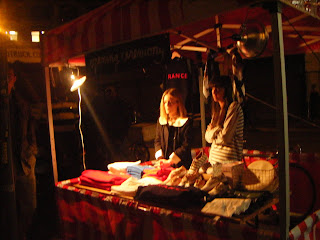 A les puces! A lonely Opening Ceremony street fair-like booth, the only way to view OC without the wait.
Opening Ceremony young dudes in their Frenchie flea market duds. 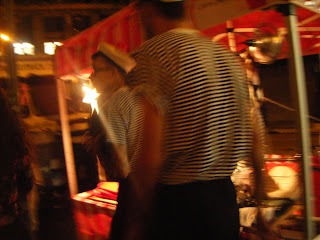 After ditching Opening Ceremony’s uber-slow queue snaking around the block at the Ace Hotel, where Kee and I bought bao sammies from an outside snack booth and sat on a stoop instead of standing online, I cabbed uptown to Bergdorf’s and Barneys sans Loup Charmant, who had to ditch me to catch Interpol in concert at Williamsburg’s Music Hall.
My second cabby of the night complained bitterly about the traffic and the streets mobbed or closed off in the name of Fashion.  Deal with it!, I wanted to say. Wasn’t this making their nights more financially beneficial?! 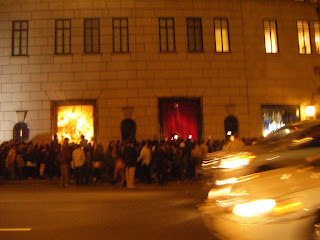 Who knew BG’s was going to be THE place to be!
Pushing through to the Fifth Avenue venue, I was engulfed by the throbbing sounds of Led Zeppelin and a surging crowd in front of live window installations that were both breathtaking and mesmerizing; Ed Tricomi was Edward Scissorhands-ing his way through a blue wig and Joey Arias was emcee-ing the entire “Curtain Call” window event, see pic above. The line to get into the venerable shop wrapped around the blocked and then hairpin zigzagged in front of the windows. I didn’t think I’d do the wait, even though I had friends working the 3rd Floor. I’d already missed the doggie fashion show. Why bother?
But I stuck around, basically for the fabulous windows and up next up, 63 year old!!! (yes, even she was spreading that news!) Lala Brooks of The Crystals took the curtain call stage to sing and Da Do Ron Ron her way through her glorious old songbook. My fav set up was the 18th century gilded stage harboring two models spinning straw into gold, with Marie Antoinette wigs of skeins of yarn, one of several performance art pieces from Mr. Douglas Little. 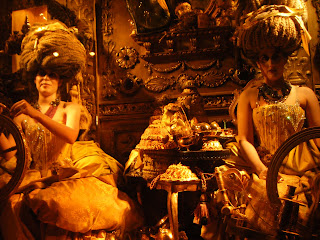 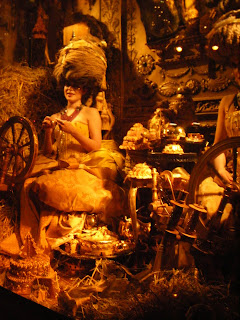 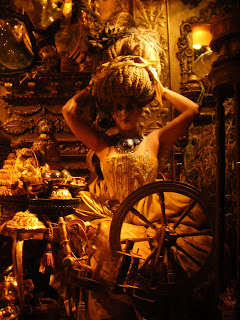 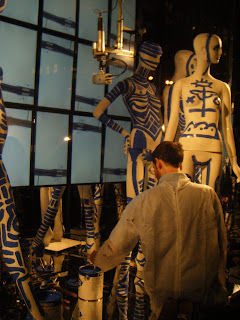 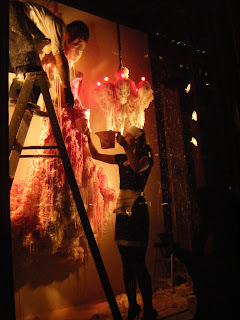 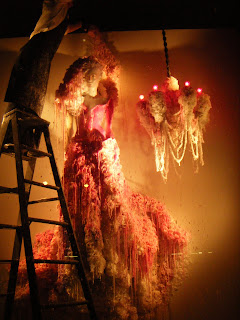 More Mr. Douglas Little, above, his Wax Poetic, had poured hot wax developing into an evermore exotic evening gown.
Made it into the store after just about 30 minutes wait, only to find the 3rd floor closed off. Apparently, Nicole Richie, Sarah Jessica Parker, Carlos Falchi and other fab fashionistas and celebs had been belting it out at Patrick McMullan’s FNO karaoke event and the floor was filled to celebra-capacity.
Somehow, after milling about for half an hour and visiting the loo in the cellar, I managed to make it into an elevator that landed on 3, said my hellos and goodbyes, then bolted to Barneys for my neighbor photographer Johnny Rozsa’s book signing party. Alas, 10:35 and 8 floors later, he was gone, as was most of the Barneys crowd.
Wiped out, I packed it in and headed back downtown, home to my hubby and my doggie.
Ahhhhh. Shopping.