In an alternate reality, Sierra Fromberg could be a poet.
In the reality we know and inhabit, this East Village boutique owner is a poet — a poet of the past. As a purveyor of vintage clothing and part of 9th Street’s ever-morphing vintage retail scene, Sierra imbues her East Village shop, Grey Era Vintage, with poetic elements, naturally utilizing flashback to its maximum capacity. 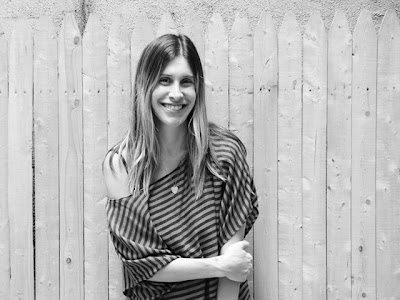 Grey Era proprietor Sierra Fromberg, photo by Jamie Newman
The exposed brick railroad layout creates its own caesura of sorts, from the antique wooden bench out front to the fireplace to the backyard garden, in between  – pause – housing upcycled silk shells and camp shirts, long sheer on-trend dresses and floral maxis, denim cut-offs and long sweaters in an ode toward the ’90s. New jewelry designs like Noise Girl’s brass and zinc nut macrame bracelets and necklaces — couplets practically, the way they’re designed — play foil to the main characters of  contemporary vintage. 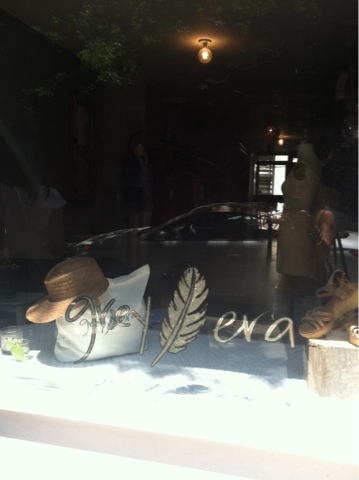 The window of Grey Era’s adorable boutique
I had the incredible luck to sit down with Sierra last week, as she treated me to

a Liquiteria juice, shot of wheat grass and the poetic mechanics of her life. What a lovely lady. This girl has a royal fashion pedigree. She literally grew up in the industry, interning at 15 at Elle magazine. She later landed a spot at Nylon, rocked publicity at a major fashion industry PR firm and assisted the fab stylist Lori Goldstein. At one point, she managed the East Houston vintage store A Little Wicked. And, here’s where the poetess part parallels so nicely: she writes — in a truly engaging manner, too! — posting about street style stars on Grey Era’s website, contributing now and then as a guest blogger to sites like The Beauty Bean and The Gift of Style.

But vintage clothing is her true passion. She’s shopped vintage and thrift for years — back to the days of the Upper West Side’s Alice Underground, a thrift clothes institution — and calls herself a clothing “stalker.” Her favorite fashion era is the ’90s, a time when grunge walked the runway to raving press as Marc Jacobs designed at Perry Ellis and Kurt Cobain still was alive.
When she decided to open her own store — “I was turning 30, it seemed like the right time” — jumping into the moment just came naturally. After all, she bears a tat reading “this moment is your life,” a quote from Tuesdays with Morrie by Mitch Albom that holds special meaning for her. Sierra says she still can’t believe it’s almost been a year since she opened. “I put together a business plan last May, started looking for space in June, signed a lease in the middle of July, spent August building out the store and shopping for inventory and opened September 15th.” 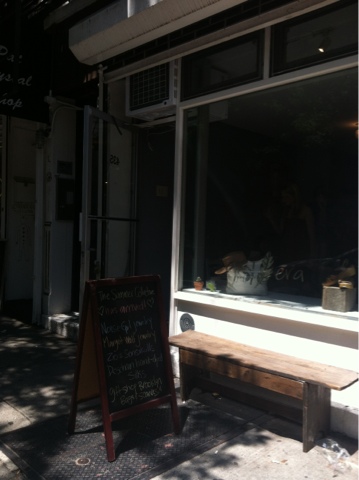 Love the bench, it reminds me of Upper Rust, the shabby chic antique place down the block
She works. And her PR past comes in quite handy, as she supports the artists and designers she carries in her store, often creating boutique events to promote them. Recently, she and e-tailer Zaden Row hosted the Summer Collective fiesta, celebrating Noise Girl designer Chelsea Van Houton, Doll Perfume creator Dana Varon, Gift Shop Brooklyn, silver artist Margot Wolf, Zio & Sons, Deschain X Grey Era, and Love Nature NYC, replete with a special “collective cooler” drink created for the occasion by Amanda Dell, of Sisters Dell (see my earlier coverage here). Several Grey Era styles are featured on Zaden Row, too, a cross-promotion that serves Sierra well, as the site groups shopping by neighborhood, keeping the serendipity of the 9th Street boutique experience in tact. Sierra also employs her own sort of foreshadowing: as she puts you together, clasps a bracelet around your wrist, snaps a pic of the look, she’s practicing personal stylist-to-be, her future career, part of her five year plan, if you will. 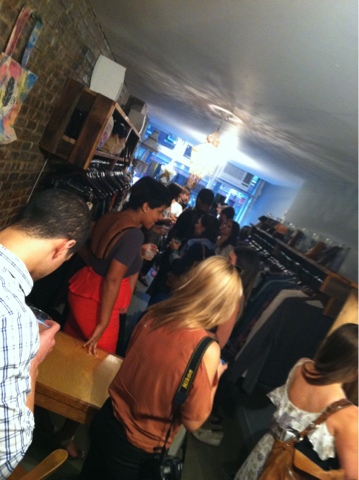 Summer Collective shopping party
Easily the title of a ballad or lyrical tome, the name Grey Era, derived poetically from Sierra’s philosophy of life, alludes to the fact that nothing is ever just black or white, that things, instead, are grey, in between and fluid. Which is fitting, especially when you consider the time frame of Grey Era’s stock; in most vintage clothing circles, the ’90s isn’t considered true vintage, so Sierra’s finds are clothes truly from a Grey Era, not modern, not old. Contemporary vintage. Another feature setting Sierra’s business apart: if you’re not ready to commit to an outfit, she will rent her goods, too. Mostly to stylists and editors, but hey. You never know. Grey areas, remember?!
I gotta say one thing, this stockist is driven. She’s training for her first marathon and is dedicated to running several days a week BEFORE opening and running her own store. She also has to make time to shop for replenishment goodies. Plus have time for the love of her life, Jamie, who’s been Team Sierra going on four years now (he took the fab pic of her above!). Check back with us here tomorrow when FW debuts a new segment, Friday’s 5, with Sierra as the premiere guest. Down the line we hope to get some great fashion tips from Sierra, too! Shout out a comment below if you’ve got any burning vintage questions and we’ll see what we can do.
We’re just gonna go with Sierra and the lovely boutique she helms as poetry in motion. 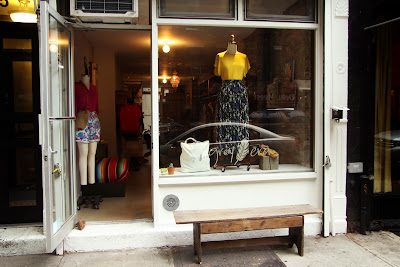 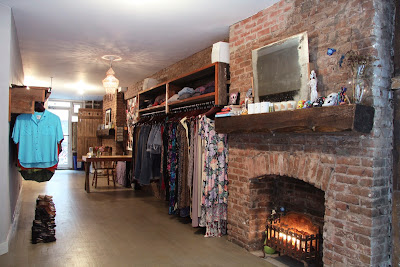 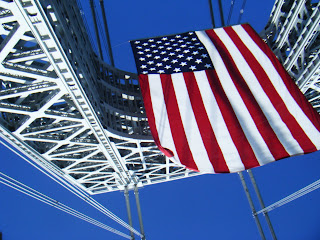 As we left the city on the 4th of July, this is the graceful image we encountered as we crossed the GWB. How more beautiful could the beginning of the weekend be, I ask?! 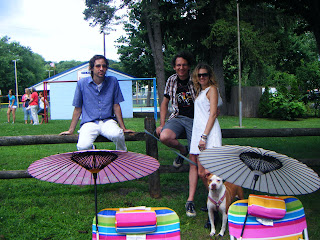 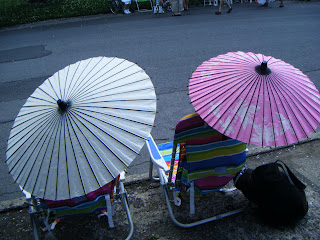 And, really. What’s a 4th of July Parade without the fire departments, the floats, the foals, the tractors (yes, again. those country towns LOVES them their tractors!) and guys + gals in kilts. Marc Jacobs? Are you listening? 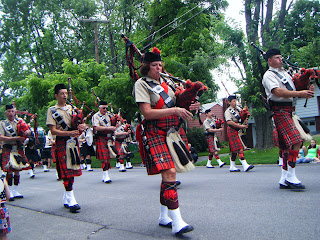 Even ticks were part of the parade. Stuffed and furry, but, yes, ticks and big ol’ dogs ~ those Sentinel people were on the MOVE! Look out, Lyme disease. (Pam Pam, that one’s for you!) 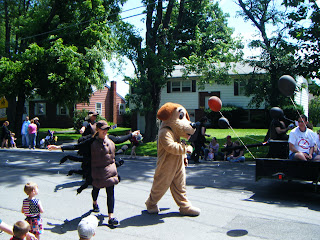