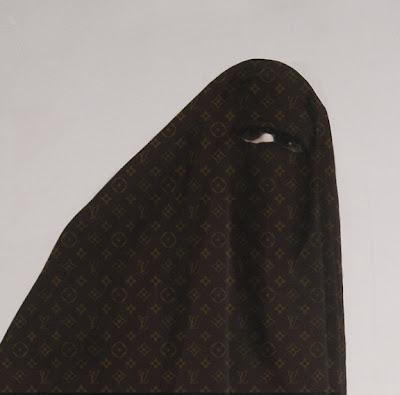 You may recall my neighbor Eric; I’ve featured him on this blog before, sitting on the small front stoop of our building, taking a cell call meeting, wearing good-looking “mandals” and subtle summer attire.

Although, you’ve probably never seen him as he appears in the photo above. Eric is not only fashionable, he’s talented, creative and an art force to be reckoned with, drawing on a strongly articulated POV.

Recently, I popped by his studio down the hall, where he spoke to me of his work, his inspiration and his fashion sensibility. Much of his current work touches upon his Iranian heritage, pop culture, current events and some collage effects of his photography, castings, LED lights and tapestry.

Eric always tests boundaries, never shying from over-the-top fabulousness, especially when it comes to hats, boots, exotic head-to-toe looks. I wanted to snap him in an outfit I’d seen him step out of the elevator wearing a while back ~ winter bundling topped with a karakul, I believe it was, the type of Persian lamb cap favored by Hamid Karzai. Unfortunately for me, when I caught up with him last month before he left for a West Coast trip, the weather had become near summer-like and the Persian hat was too hot to model. 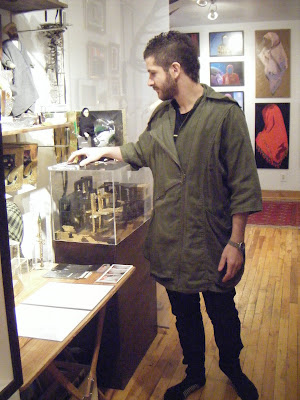 Off the cuff, he answered the door in a slightly asymmetrical, military-esque olive H&M jacket, part artists’ smock, part work apron, atop basic black. His style that day also rocked the East Village’s current love of full-on facial hair, a faux-hawk and no shoes, just socks, exhibiting a comfortableness with himself and his surroundings.

Some of Eric’s pieces, like the skateboards adorning the wall behind him, below, reflect his roots, printed as they are with the patterns of Persian rugs, like the one I sat upon while he talked to me cross-legged from his futon, also adorned with a Persian textile. 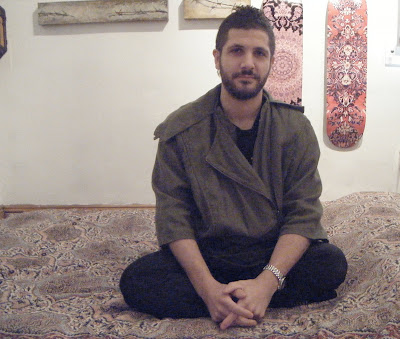 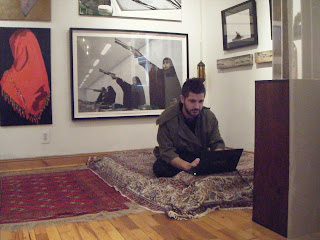 These are not your usual proclamations of war or peace. As Eric himself says, “It’s not really political,” what he does. “It’s just what I see and try to express. As an artist, you take things and turn them into something else.”

Creatively, he’s inspired and amused by the East Village boutique Obscura and the Soho-based near-museum of Evolution. He loves Comme des Garçons and Helmut Lang, although he says he “doesn’t tease” himself by trying to own pieces. He also admires 7, Oak, Future Perfect and Moss for fashion and style, while the Museum of Natural History, the Metropolitan Museum of Art and the Frick are favorite inspirational and intellectual collecting grounds. “The Met’s like an adult education area of Disney. Especially the new Greek and Roman wing.”

I noticed last week that Eric was written up by SOU・SOU San Francisco!, the West Coast retail boutique, as its customer of the day. The accompanying photo showed Eric wearing his new “Tabi” shoes, the classic articulated Japanese slipper shoe styled like a mitten. Excellent! Another new iconic style to look forward to in my elevator!

View more of Eric’s artwork here. If you’re in Seattle around the 15th of June, catch some of his pieces at CoCA, the Center on Contemporary Art.