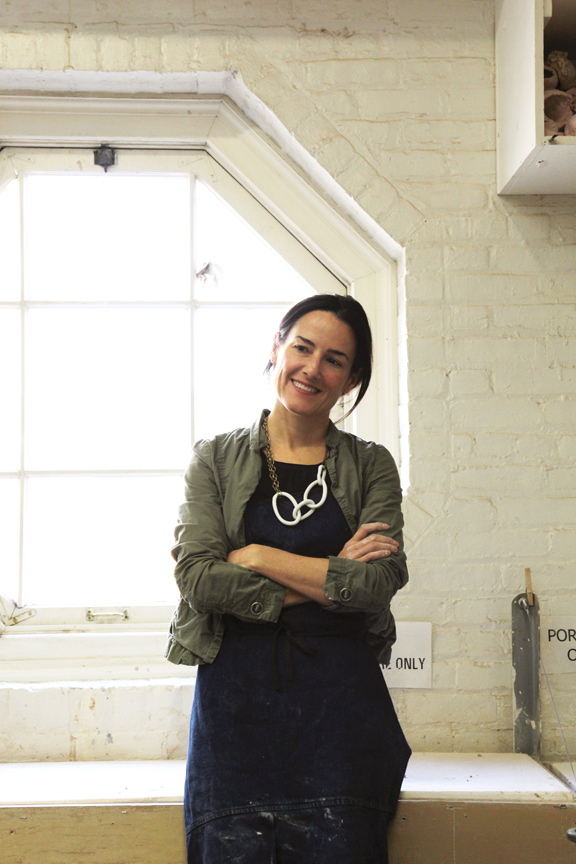 A childhood spent amidst the beaches of Southern California ingrained Maria Moyer with a loving respect for ocean landscapes and sea organisms, lending her work as a sculptor and jeweler inspiration from the “exquisite weirdness of nature,” a sensibility that imbues her overall work as an artist. From the opportunity to dissect an 18-foot beached squid at 11 years old under the tutelage of her professor, to an iconic meeting with Dr. Jane Goodall years later where she was able to present the doctor with a “thank you” porcelain rose, Maria’s intersections with nature and the world at large always have created magic.

I covet Daphne Guinness’ fearless Cruella de Vil look, her eccentric style and glamor, but especially her incredibly exotic collection of avant garde couture. Pieces from her extensive fashion art collection are on exhibit at The Museum of F.I.T., ending tonight, and include works from Alexander McQueen, Valentino, Dior, Gareth Pugh, and Karl Lagerfeld for Chanel, as well as several of her own designs. 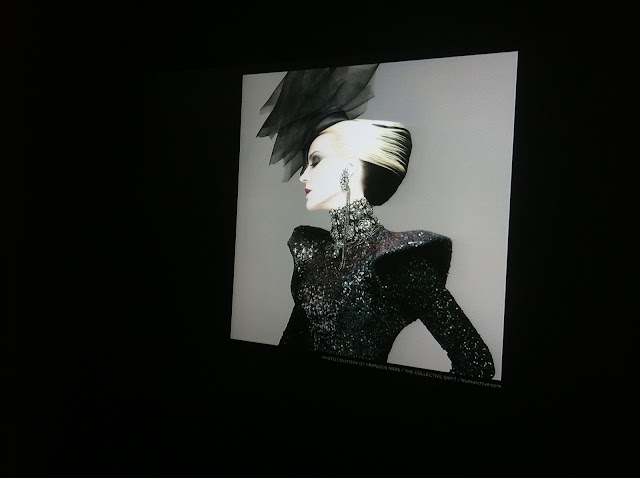 From Daphne’s playlist, a little Bach from Glenn Gould: 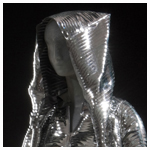 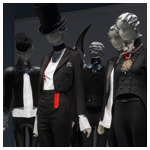 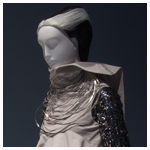 Rick Owens sleeveless evening coat
Step into her heel-less sparkly shoes and you add a foot to your height. Button up in her pint-sized jackets and you are able to take the world by storm.  My favorites? The tiny menswear cutaway tuxedo from H. Huntsman and impeccable top hat, the japonoise chopine shoes from McQueen, the black and white corsetery jackets from Dolce e Gabbano and the feathers and sparkle that comprised or just added serious bling to outfits. Divided into six themes, from Dandyism to Armor, to Exoticism to Sparkle, to Chic and Evening Chic, the quirky and talented style icon and brewery heir’s passion for fashion makes you thirsty for more. 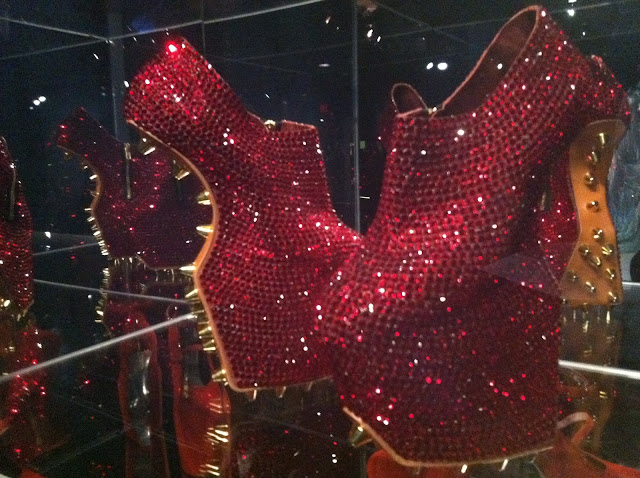 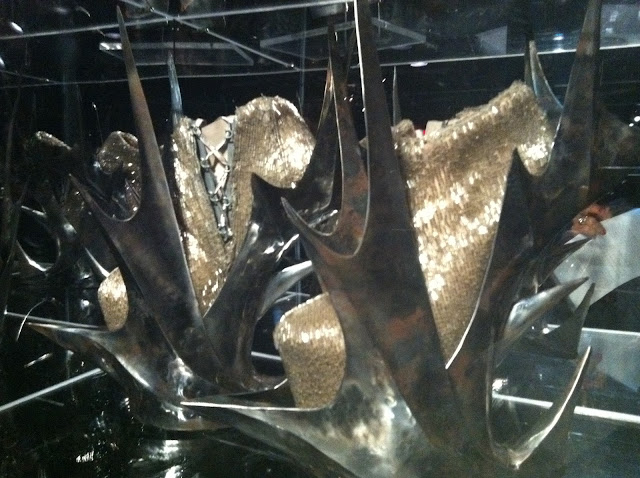 Serendipitously, walking from the exhibit, we came upon a sample sale of very Daphne-esque jewels at Angel Street Thrift shop on West 17th, priced from a dollar and up. 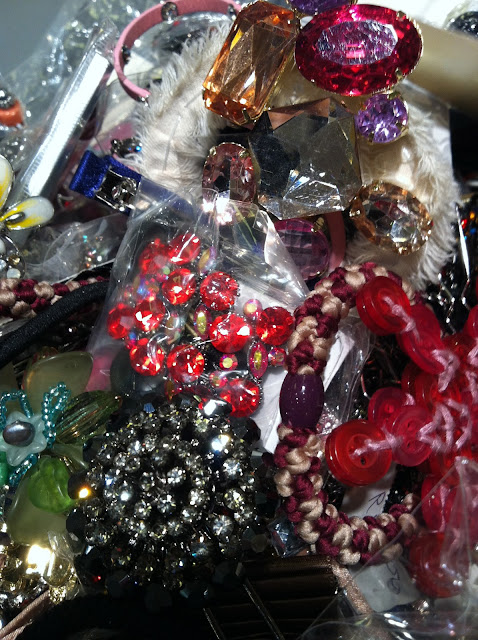 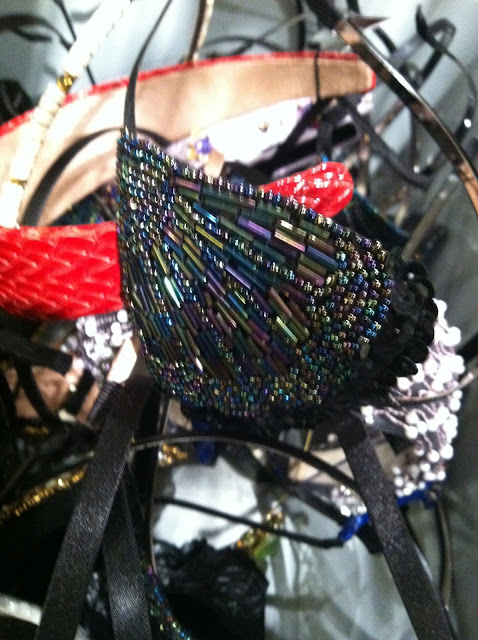 As Daphne has famously (infamously?) said: “We need better things, not more. We should not pollute the world with meaningless, unused things when we can make and support things of rare and precious beauty.”

We did not consume.
“For me, what I do is an artistic expression which is channeled through me. Fashion is just the medium.” — Alexander McQueen 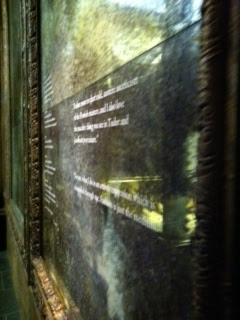 The medium was more than just fashion at Savage Beauty, the Alexander McQueen exhibit at the Met closing this Sunday. The entire showcase was a work of art, with insightful quotes, holograms, two-way mirrors, rotating platforms, looping videos and films. From the beginning, where it felt like we had entered a dark + stormy night, the sounds of wind blowing fiercely as though through tree tops, the screams of coyotes or owls or crows echoing about the dimly-lit opening of the exhibit, we were transported.
It was the same with McQueen’s masterpieces. From his master thesis pieces, exquisitely tailored black fashions fit for modern day duchesses and queens, to the Scottish plaids of his Highland Rape collection to the shredded silky seaweed of the shipwrecked Plato’s Atlantis, the exhibit nearly brought me to tears. Thinking of the tragedy of the designer’s suicide at 40, the fact that we would never again be privy to his creative genius and  obviously tortured soul, the unimaginable pain he must have endured, my emotions were scraped deep and searingly, especially after reading this quote juxtaposed within romantic and flowing silk jackets and hair coats from his early Dante collection:
“I oscillate between life and death, happiness and sadness, good and evil.”
As my friend Gloria quipped, don’t we all. Yet somehow, it meant more, went deeper with McQueen. McQueen’s horsehair knight dress with sculpted lilac leather corset from It’s Only a Game showed the true shape of a woman — real breasts and hips — oscillating between human and animal, from the bit mouthpiece to the pony tail. It was counterbalanced by a video of the 2005 show presented with models on a huge human chess board, inspired by one of the early Harry Potter movies. 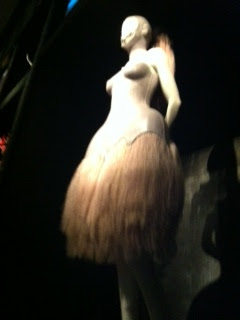 The hydrangea gown, below, originally created with live and artificial flowers, embodied the designer’s Romanticism connection with nature; he often used natural materials as no designer has, resulting in the oyster shell dress and the mussels corset from the Voss collection, the gold feather jacket, feather gown and butterfly headdress. The armadillo platform shoes were created with an anthropomorphic wink, looking impossible to walk or stand in. 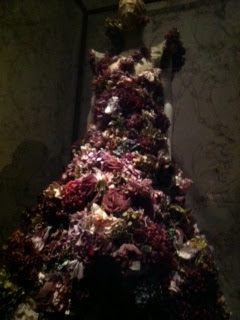 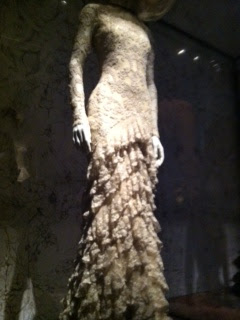 The dramatic headpiece of the antlers are missing in this photo of the lace dress, above, and are seen slightly behind the feather dress, below, both from the Widows of Culloden collection. McQueen’s insight into the provocative piece:
“When we put the antlers on the model and then draped over it the lace embroidery that we had made, we had to poke them through a £2,000 piece of work. But then it worked because it looks like she’s rammed the piece of lace with her antlers. There’s always spontaneity. You’ve got to allow for that in my shows.” 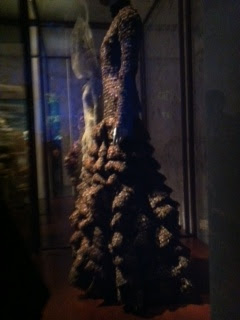 “Birds in flight fascinate me. I admire eagles and falcons. I’m inspired by a feather but also its color, its graphics, its weightlessness and its engineering. It’s so elaborate. In fact I try and transpose the beauty of a bird to women.” – Alexander McQueen.
His mastery was impeccable, his creativity and influence inescapable. Like the birds that infiltrated McQueen’s inspiration and fascination, the designer soared to unimaginable heights. The pity is the price he paid for his passion.

If you believe that every time a bell rings an angel gets his wings, per Frank Capra’s “It’s a Wonderful Life,” then I guess bells were ringing yesterday. 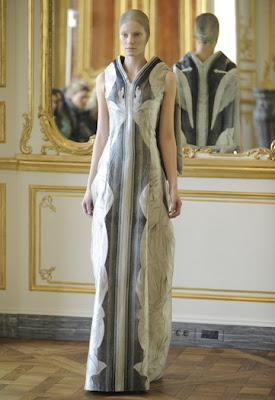 At an abbreviated presentation of the late great designer Lee Alexander McQueen’s final fashion collection reviewed by wwd.com (with photos by Giovanni Giannoni), there was this gown ~ with digitally-engineered angel wings sprouting perfectly from the shoulders and visible through the mirror of the grand salon of Paris-based parent company Francois Pinault.

If only McQueen could have found his own Clarence in time.